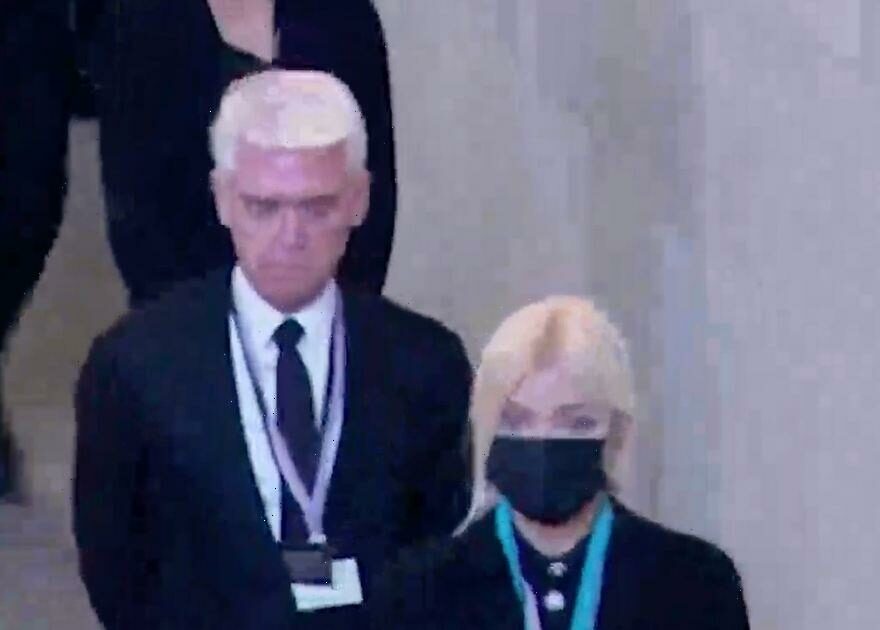 This Morning hosts Holly Willoughby and Phillip Schofield looked sombre as they paid their respects to the lateQueen Elizabeth IIas her coffin is Lying-in-State in Westminster Hall.

The TV stars were dressed in black and had lanyards around their necks, which could be for press access to see the Queen Lying-in-State.

Holly, 41, wore a buttoned-up dress with silver buttons and she donned a black face mask, whilst Phillip, 60 stood behind her wearing a dark suit and a very solemn expression.

Their appearance to pay their respects to the Queen at Westminster Hall came as Friday's This Morning was cancelled in favour of rolling ITV news coverage of the Queen.

Holly and Phillip's fellow This Morning presenter Alice Beer was granted press access at Westminster Hall at the crack of dawn on Thursday morning.

Speaking to Holly and Phil on yesterday's show, Alice said of her visit: "Incredible. Just before dawn I was allowed into an appointed slot in Westminster Hall.

"Let's just be very clear, I didn't take anyone's place in the queue. I wasn't queue jumping. This was a a slot for a reporter or member of the press so that I could tell you about it. Witness it and share it with you. And that was a complete honour."

Their fellow ITV star Susana Reid, who frontsGood Morning Britain, revealed that she had waited in line with her mother Sue for over seven hours before they reached the Queen's coffin to pay their respects.

Susana described the moment as "majestic and peaceful" and she offered some helpful tips for those who were planning to queue to pay their own respects to the late Monarch.

Taking to Twitter, Susanna wrote: "'Evening – along with my lovely mum and her very good friend, I have just experienced a moment in history – witnessing the Queen lying in state in Westminster Hall. At once majestic and peaceful."

"If you are planning to queue here are our tips. We joined at 1.23pm near Butlers Wharf and entered Westminster Hall at 8.43pm – 7 hours 20 mins.

"Wear the comfiest shoes you own. Go with someone if you can, although everyone in the queue was friendly.

"Don't carry too much in a bag – water is freely available and there are lots of cafes along the route.

"Also plenty of toilets. I put my phone on low battery mode and it lasted the entire time."

The queue to see the Queen Lying-in-State has been paused for at least six hours as the waiting time had risen to at least 14 hours.

In a tweet, the Department for Digital, Culture, Media and Sport said: “Southwark Park has reached capacity. Entry will be paused for at least 6 hours. We are sorry for any inconvenience.

“Please do not attempt to join the queue until it reopens.

“Check back for further updates.”

In its most recent update, the department said estimated queueing time for mourners had risen to at least 14 hours.

Sharing four images of the Queen at various stages in her life, Holly wrote: "Thank you for your lifetime of service and humble commitment to duty… you really were the best of us, you never let us down…"