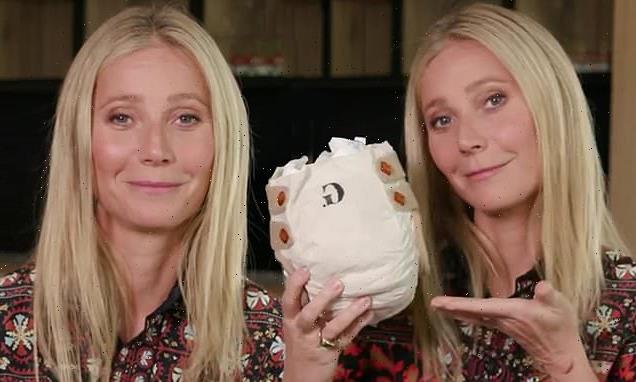 Gwyneth Paltrow reveals that Goop’s $120 ‘Diapér’ was a PR stunt to protest how diapers are taxed ‘like a luxury good’: ‘It was designed to p*** us off’

Gwyneth Paltrow confirmed the suspicions of many of her fans and critics on Wednesday evening when she revealed that her shockingly pricy Goop diaper was a fake.

The 49-year-old actress-turned-entrepreneur posted an Instagram video to Goop’s account revealing that the ridiculous Diapér, which was said to sell for $120 for a pack of 12, was a protest against diaper taxes across the United States.

The Oscar winner noted in her impassioned clip that 33 states tax diapers as a ‘luxury good,’ rather than eschewing the tax by treating them as an essential item. 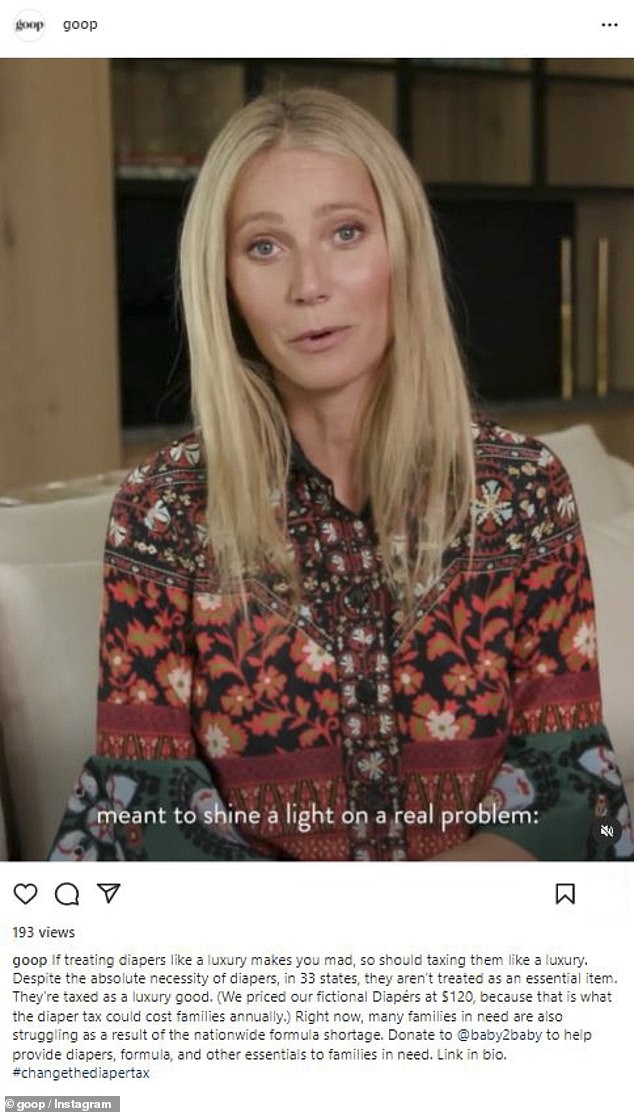 Raising awareness: Gwyneth Paltrow, 49, revealed Wednesday on Instagram that Goop’s ridiculous $120 Diapér was actually a PR stunt to highlight ‘luxury’ taxes on diapers across the US

Gwyneth appeared in her video in a black top decorated with lovely orange, green and red floral designs, and she wore her blond hair with a middle part.

After getting her followers up to date on the Diapér, she said it was ‘good’ that the product stirred up outrage.

‘It was designed to p*** us off,’ she said emphatically. ‘If treating diapers like a luxury makes you mad, so should taxing them like a luxury.’

The Royal Tenenbaums actress confirmed that it was a ‘fake product meant to shine light on a real problem.’ 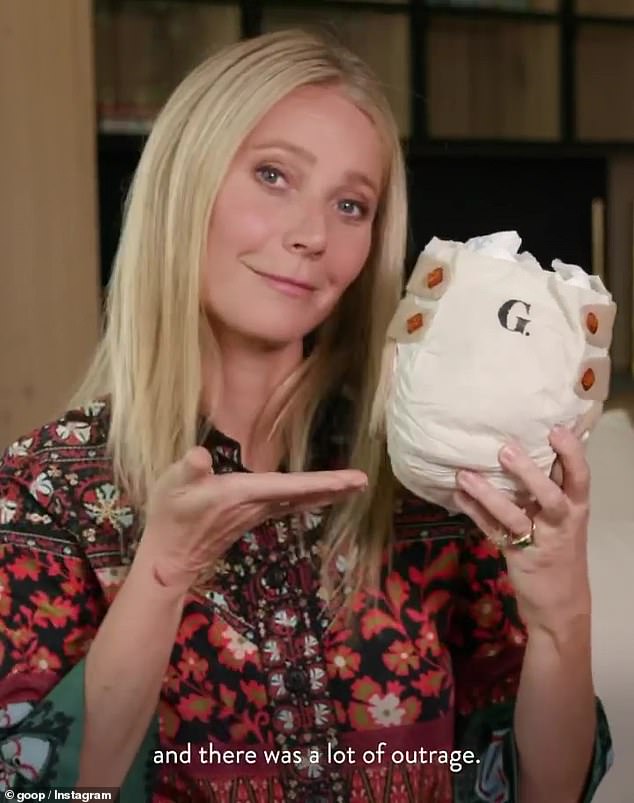 Pricy: ‘It was designed to p*** us off,’ she said of the opulent diaper. ‘If treating diapers like a luxury makes you mad, so should taxing them like a luxury’ 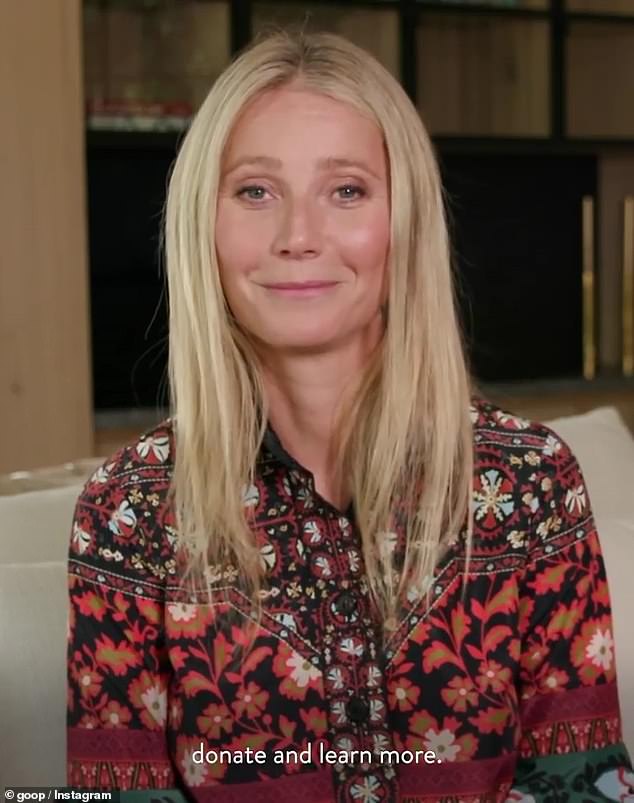 Luxury tax: ‘Despite the absolutely necessity of diapers, in 33 states they aren’t treated like an essential item. They’re taxed like a luxury good,’ Gwyneth continued

‘Despite the absolutely necessity of diapers, in 33 states they aren’t treated like an essential item. They’re taxed like a luxury good,’ Gwyneth continued.

She referenced a study conducted by the Huggies Foundation and the National Diaper Bank Network, which found that one in three families struggles to afford diapers.

She added that getting rid of the ‘diaper tax’ wouldn’t completely solve the issues families have of finding affordable diapers, ‘it could allow many families to pay for another month’s supply.’

In her Instagram caption, Gwyneth explained where the outrageous ‘$120’ price came from: ‘We priced our fictional Diapérs at $120, because that is what the diaper tax could cost families annually.’

On Goop’s website, the brand wrote that diapers were the ‘fourth-highest household expense among low-income families,’ citing Baby2Baby, a nonprofit organization that provides diapers and other necessities to families in need.

The organization added that requests for diapers went up by an eye-popping 505 percent during the pandemic, which was exacerbated by national shortages.

Gwyneth urged her followers to donate to the organization to fund its advocacy efforts to end taxes on diapers and to help purchase them for families. 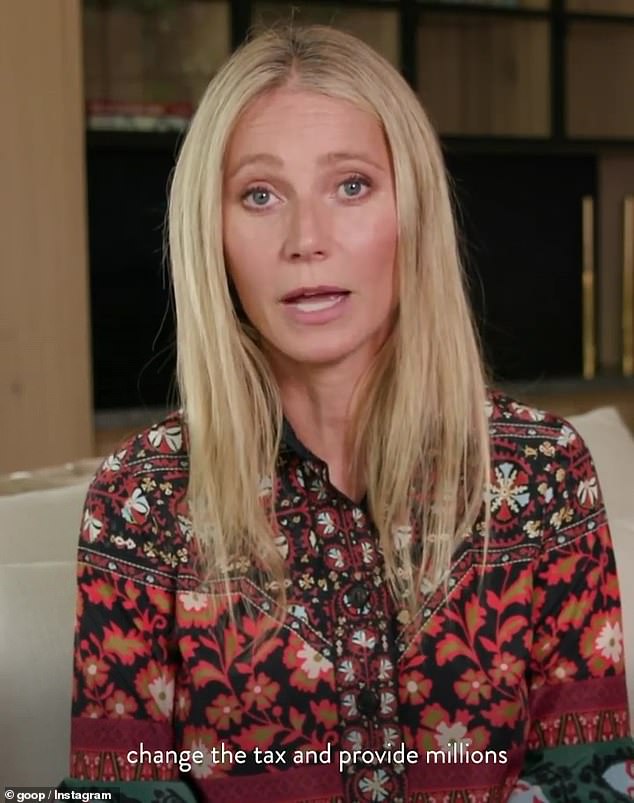 Explanation: In her Instagram caption, Gwyneth explained where the outrageous ‘$120’ price came from: ‘We priced our fictional Diapérs at $120, because that is what the diaper tax could cost families annually’

The wellness and lifestyle brand originally shared photos of its highly-impractical ‘Diapér’ on Instagram on Wednesday, just days after Paltrow spoke out against diapers being taxed as a luxury good on CBS Sunday Morning.

Goop’s disposable diapers certainly looked luxurious thanks to their wool lining, amber fasteners, and the brand’s trademark ‘G.’ They also cost a whopping $120 for a pack of 12.

‘Meet The Diapér. Our new disposable diaper lined with virgin alpaca wool and fastened with amber gemstones, known for their ancient emotional-cleansing properties. Infused with a scent of jasmine and bergamot for a revitalized baby,’ the product description reads. 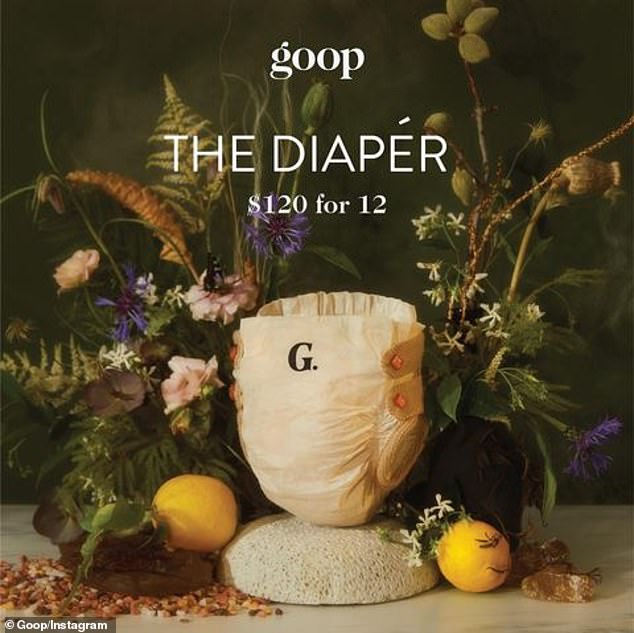 Pulling your leg: Gwyneth Paltrow’s lifestyle brand, Goop, announced the launch of its luxury diaper line on Instagram on Wednesday, but some people were convinced it was a spoof 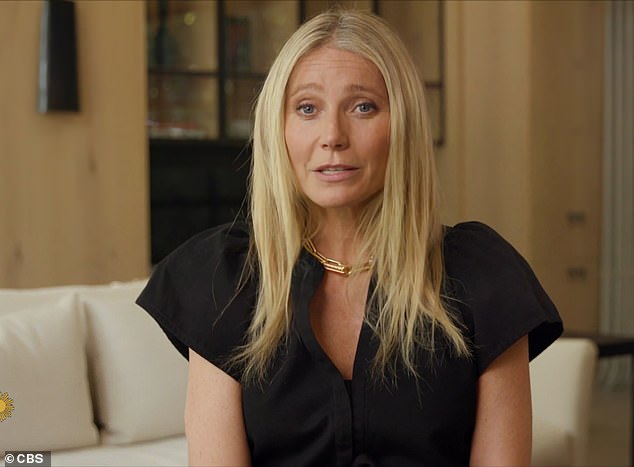 Timing: Goop shared photos of its highly-impractical ‘Diapér’ just days after Paltrow, 49, spoke out against diapers being taxed as a luxury good on CBS Sunday Morning (pictured)

The new diaper line was supposed to drop tomorrow at 11 a.m. EST, according to the post, which had many Instagram users scratching their heads.

‘Is it April Fools’ Day?’ one person asked, while another added: ‘Is this an SNL skit.’

‘Got to be a joke,’ someone else insisted. ‘Although you never know with GOOP.’

‘Omg fancy moms need to be even fancier and out of touch!’ one person griped. 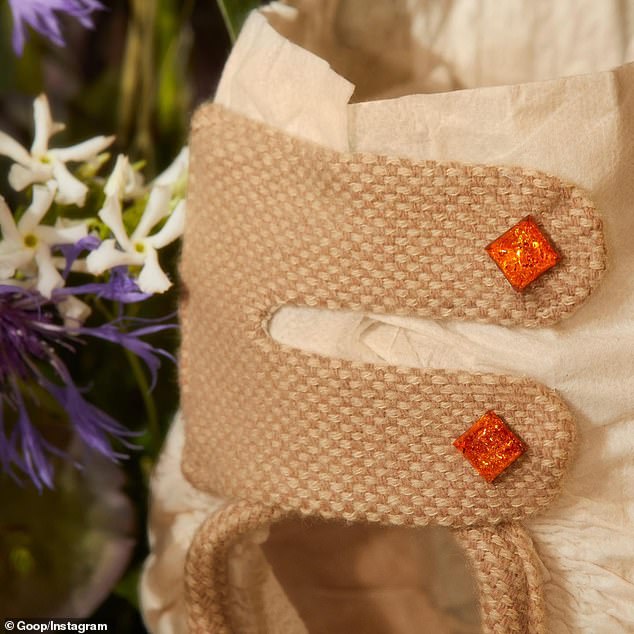 Having a laugh: The disposable diapers are lined with virgin alpaca wool and fastened with amber gemstones, which are ‘known to have ‘ancient emotional-cleansing properties’ 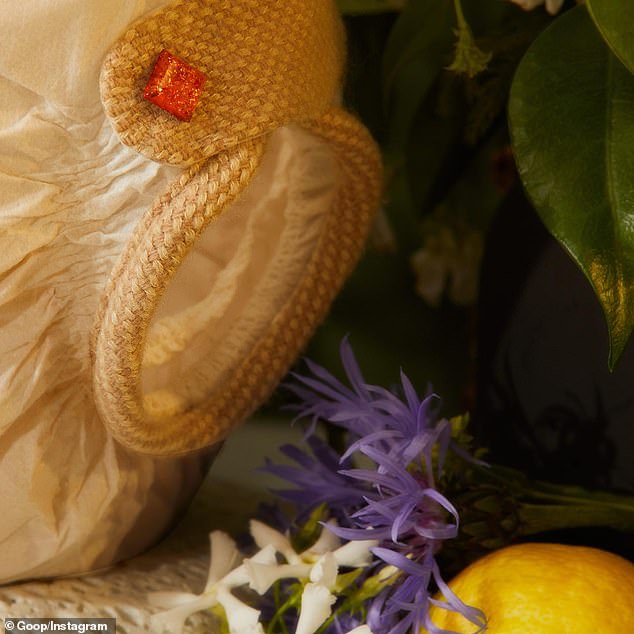 Over the top: The diapers also ‘infused with a scent of jasmine and bergamot for a revitalized baby.’ The diapers cost $120 for 12 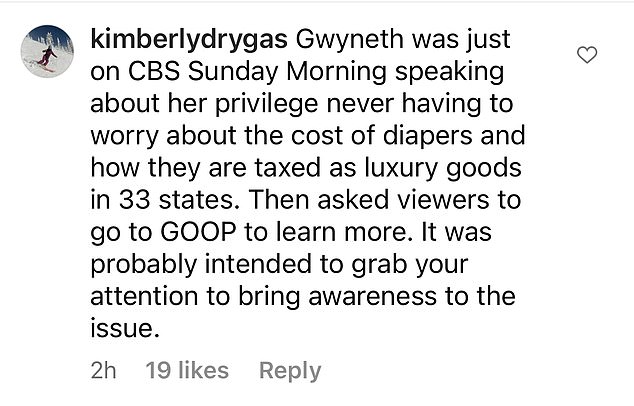 Nailed it: Instagram users didn’t know what to think, but many insisted it had to be a joke. Others pointed out that Paltrow has been speaking out against the diaper tax and it’s likely a stunt

‘You’re effing kidding me?! I have no words,’ another shared. ‘Why not donate to a worthwhile organization instead for underserved mothers and children. Done with Goop!’

However, a few others insisted the launch was satirizing how diapers are taxed like a luxury good in more than half the states in the country.

‘Gwyneth was just on CBS Sunday Morning speaking about her privilege never having to worry about the cost of diapers and how they are taxed as luxury goods in 33 states,’ one woman pointed out. ‘Then [she] asked viewers to go to GOOP to learn more. It was probably intended to grab your attention to bring awareness to the issue.’

‘Goop [has] been speaking out and urging the US government to remove the tax on diapers — they are currently taxed as luxury items in 33 states,’ someone else wrote. ‘This is satire to raise awareness.’ 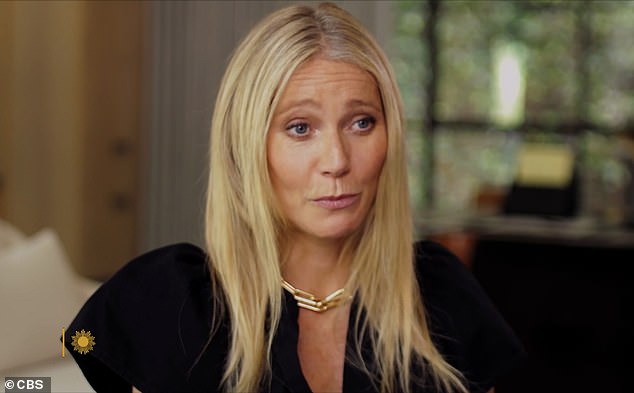 Speaking out: ‘Despite the absolute necessity of diapers, in 33 states they’re taxed like a luxury good,’ Paltrow explained in her pre-taped segment that aired on CBS Sunday Morning this week 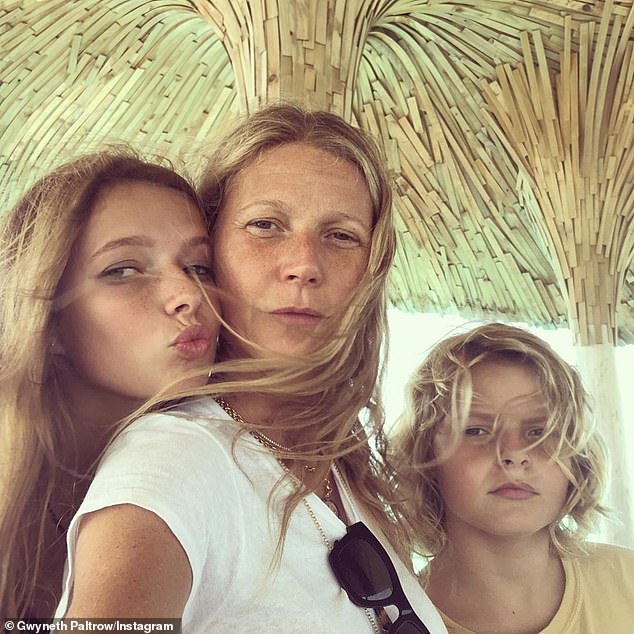 Carefree: Paltrow, who has a daughter, Apple, 17, and a son, Moses, 17, admitted that she never had to think about the cost of diapers when her children were babies

Paltrow shares two children — Apple, 17, and Moses, 16 — with her ex-husband, Coldplay frontman Chris Martin, and has changed plenty of diapers in her day.

In a pre-taped segment that aired on CBS Sunday Morning on Mother’s Day, the mother of two opened up about motherhood and the financially crippling effect the tax on diapers has on low-income families.

‘I never had to think about the cost of diapers, never once, until recently when my team at Goop brought it up,’ she said. ‘We were talking about the diaper tax. Despite the absolute necessity of diapers, in 33 states they’re taxed like a luxury good.

‘Depending on the state, this sales tax can add between 1.5 and 7 percent to their cost. This makes diapers the fourth highest household expense for many low-income families.’

Paltrow urged people to head to Goop to learn more, but there doesn’t appear to be any information on the site as of yet.

Three days later, her brand announced the launch of ‘The Diapér,’ leaving fans no other choice but to wait until Thursday to see if the line is for real or a catalyst for a greater discussion.