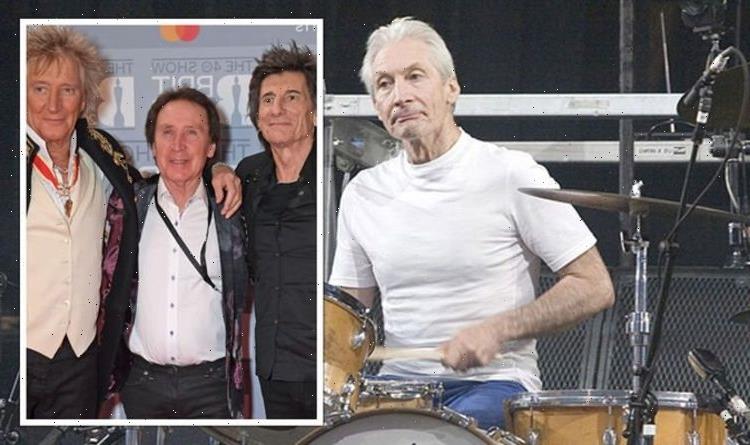 Faces drummer Kenney Jones, 72, spoke candidly about his last conversation with Charlie Watts, who has died at the age of 80. The legendary Rolling Stones drummer died peacefully in a London hospital on Tuesday.

Tributes have poured in for the musician from various prominent figures within the industry.

Kenney, who is one-third of Faces alongside music veterans Sir Rod Stewart and Sir Ronnie Wood, revealed he immediately called the latter after hearing the heartbreaking news.

The performer added that the late Stones legend was pleased that Kenney had called him during his final days.

The latter said he got in touch with Charlie at the beginning of June on his 80th birthday.

“I spoke to him at home – it was amazing that he reached 80 after everything he had been through such as having cancer,” he explained.

“He didn’t sound very great but he was wonderful to talk to and very friendly.”

Kenney added to the Mirror: “He was so pleased that I had called and we laughed together about being on tour in the 80s.”

The Faces legend said that just days after he spoke to Charlie, the Stones drummer was admitted to hospital.

Kenney also shared that he spoke with Ronnie this week who said Charlie’s death had hit him like a “ton of bricks”.

The drummer added that the pair were very close and Ronnie has been left shell-shocked by his bandmate’s death.

Kenney explained that he was aware that Charlie was gravely ill, adding it was “sad” he couldn’t recover for the Stones tour.

Earlier this month, it was announced that the Stones drummer was to miss the band’s forthcoming US tour.

Charlie said at the time: “For once my timing has been a little off. I am working hard to get fully fit but I have today accepted on the advice of the experts that this will take a while.”

In 2004, he was treated for throat cancer at London’s Royal Marsden Hospital.

Charlie was given the all-clear after a four-month battle, involving six weeks of intensive radiotherapy treatment.

Following his recovery, the band began work on their 22nd studio album, A Bigger Bang.

Faces legend Kenney replaced Charlie on the Rolling Stones’ 1974 hit It’s Only Rock ‘N Roll (But I Like It) but it caused no hard feelings.

At the time, he revealed he called Charlie to apologise but added the drummer was fine with it, saying it “sounds like me anyway”.