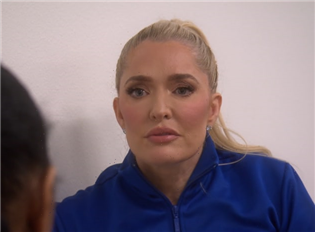 Now that this season of The Real Housewives of Beverly Hills has begun, Erika Jayne knows that she went too far at times.

She knows that viewers are going to have a lot to say about her behavior.

It turns out that some of it, at least, has an explanation.

Erika admits that she mixed her prescription medications with alcohol, with disastrous and embarrassing results.

Erika Jayne opened up to Us Weekly, sharing that she had no idea that her medications could have such potent interactions.

“Well, look, I’ve been very open and honest,” she began.

Erika continued: “which I didn’t know that it would make you this drunk and it did.”

“I do not have a problem,” she asserted.

Erika warned: “I mean, are you gonna see a moment that, you know, you will probably be like, ‘Is that Erika?’”

She admitted: “And the answer is yeah. I mean, that was me.”

Erika explained: “At that time, it was really difficult because there were moments that I didn’t wanna get out of bed.”

Erika added that these were “more than moments, there were days and you have to do that.”

She then got almost painfully, show-breakingly real.

“And let’s be honest, you know, you’re sitting at these parties and some of these women are kind of boring,” Erika reminded everyone.

“So you have a drink [and then] you have another drink,” Erika said.

Embarrassing though her actions may be, Erika insisted that she does not personally feel “embarrassed” by her on-screen behavior.

“You know, some of my behavior was not great, but it’s also very real,” she pointed out.

“It’s also part of life,” Erika argued, “and I wouldn’t be the first person that this happened to and won’t be the last.”

Erika explained that, just like last season, her mindset was focused on self-preservation as her entire life has been torn apart.

“My mindset was survival, like it was the season before,” she described.

“The season before was a real fallout [and] this season is really trying to pull yourself together and go on,” Erika detailed.

“And, you know, it was tough,” Erika characterized. “But ultimately I’ll get there.”

She stated: “It’s part of the human experience.”

Erika elaborated: “I mean, you can’t go through what I have gone through the previous season and not feel something and not feel great and not want to have a good time.”

“I wanted to have some fun,” Erika explained.

Erika did also concede that she is often “misunderstood.” That seems likely.