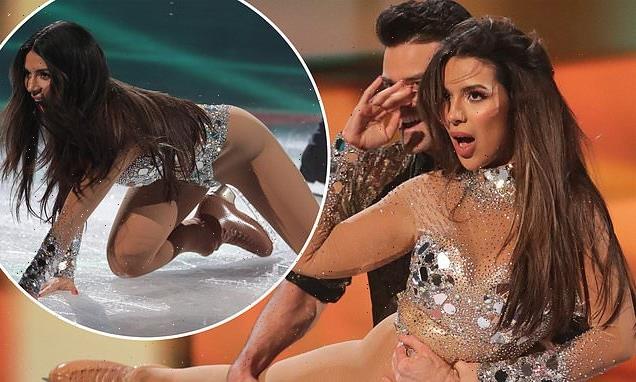 Family and friends of Ekin-Su Culculoglu reportedly feel she has been ‘hung out to dry’ by Dancing On Ice bosses after viewers complained about her routine on last week’s show, leaving her future on the programme in doubt.

The Love Island star recreated a memorable scene from the ITV2 reality show where she crawled on the ground and prompted over 100 Ofcom complaints from viewers who thought the routine was too racy for the family friendly series.

According to The Sun, those close to Ekin-Su are not happy with how the situation was handled as she did not choose her outfit nor the moves she performed. 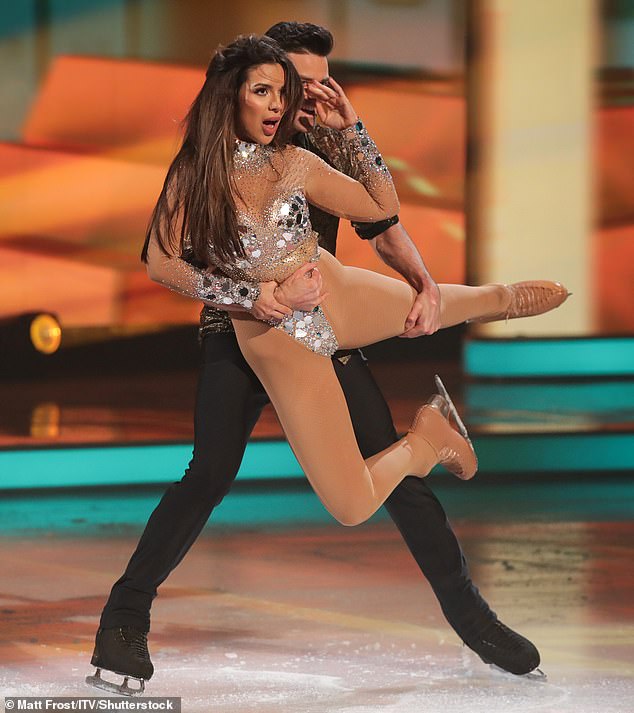 Unhappy: Family and friends of Ekin-Su Culculoglu reportedly feel she has been ‘hung out to dry’ by Dancing On Ice bosses after viewers complained about her routine on last week’s show

A source said: ‘The general feeling among her family and friends is that she has ended up in this situation through absolutely no fault of her own.

‘Ekin-Su was told what track she was skating to, what outfit she would wear and what moves she’d be delivering.

‘The feeling is that the performance she gave didn’t go down well with viewers of a show which airs at tea-time on a Sunday night, particularly one which is a favourite with families.’

The insider added that ITV bosses thought it was ‘reasonable’ for a Love Island contestant to perform a racy routine but the audience for Dancing On Ice is different. 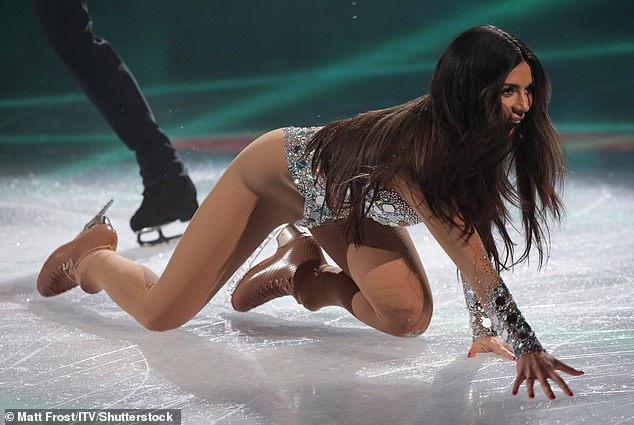 Raunchy: The Love Island star recreated a memorable scene from the reality show where she crawled on the ground and prompted over 100 Ofcom complaints from viewers

The feeling among Ekin-Su’s loved ones is that the show pushed things too far with her routine.

However, the Turkish beauty is said to be putting on a brave face and did not have any qualms about the performance.

MailOnline has contacted representatives of Dancing On Ice for comment.

Ekin-Su certainly brought some fire to the rink, stepping out in a nude mesh jumpsuit with a dramatically embellished detail.

The ensemble was a recreation of the one Britney Spears wore in her Toxic music video – which the reality star was dancing to. 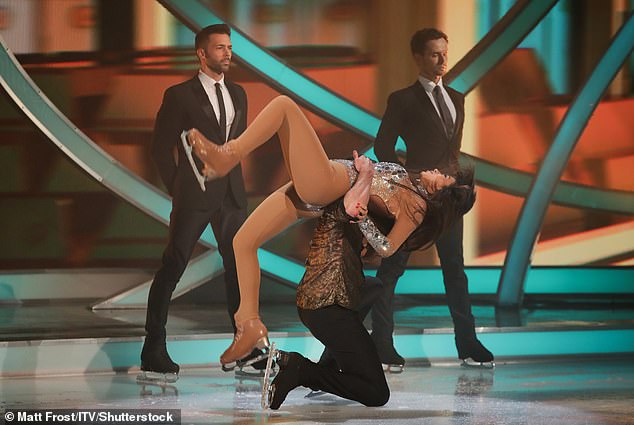 A source said: ‘The general feeling among her family and friends is that she has ended up in this situation through absolutely no fault of her own’

The actress crawled across the ice during the performance, an ode to the famous Love Island scene in which she crawled around the villa’s terrace to kiss fellow islander Jay Younger behind partner Davide Sanclimenti’s back.

The sultry routine also saw her lie on her back and be swept up into partner Brendyn’s arms, with a slew of animated facial expressions.

Ekin-Su and professional skater Brendyn Hatfield were marked middle of the leaderboard by the judges, who gave a score of 21.5.

But while they agreed that the star certainly had sex appeal, they were hoping for a little more from the performance. 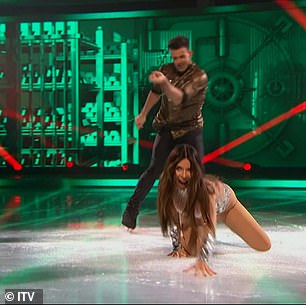 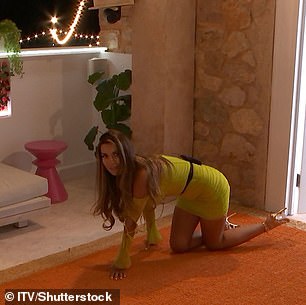 THAT crawl: The actress crawled across the ice during the performance, an ode to the famous Love Island scene (right) 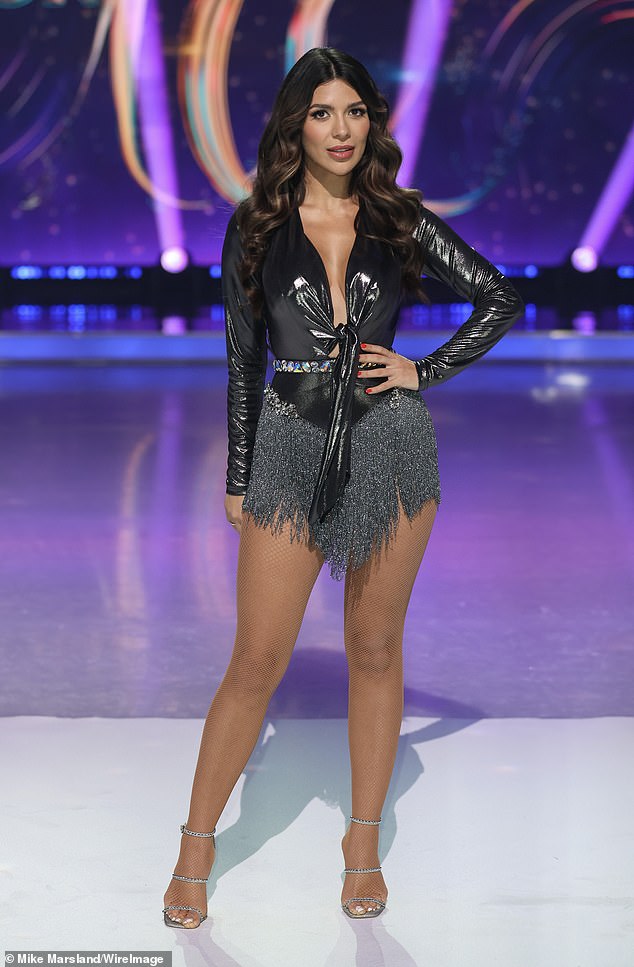 Confident: Ekin-Su is said to be putting on a brave face and did not have any qualms about the routine

‘It was very sexy. But what I want more of is the skating,’ said judge Jayne Torvill. Ashley was in agreement as he said: ‘Skate on your own without holding on to Brendyn, show us what you can do.’

Many viewers also took to social media to brand the routine ‘not appropriate’ for the family show, which airs before the watershed.

But the performance was a hit with Ekin-Su’s boyfriend Davide, who sat in the audience and teased that he ‘couldn’t wait’ to take her home.

Later in the show, the public vote revealed that the Love Island star received the lowest number of public votes and will face a skate-off in this week’s show, alongside one other star.

DANCING ON ICE 2023: MEET THE CONTESTANTS

WHAT DID THEY SAY?:  ‘I’ve turned it down before because I was terrified, but when I turned 50 I made a pact to get out of my confront zone. ‘

WHAT DID THEY SAY?:  ‘I’ve got some amazing news to tell you. I’m so excited, I can’t wait to get myself on the ice and skate. Stay tuned and see you on the ice.’

WHAT DID THEY SAY?: ‘I’ve not got the best coordination so when people find out they will laugh, but I don’t want to spend my life saying “I can’t do this, I can’t do that.”

WHAT DID THEY SAY?: ‘I’m so excited. I wanted something in my life with structure and it’s more serious than what I usually do.’

WHAT DID THEY SAY?: ‘I’m so excited that I get to learn how to dance…on ice! I’m terrified but can’t wait – I just want to make the most of this whole experience.’

WHAT DID THEY SAY?: ‘I want to learn how to skate and make my family proud of me and put on a show for everyone to see.’

WHAT DID THEY SAY?:  ‘I am definitely in it to win it.And this may be one of the scariest things I’ve ever signed up for but I couldn’t be more ready for the challenge!’

WHAT DID THEY SAY?: ‘I’ve not done much ice-skating but I am so excited for the opportunity. I’m so excited to get into that routine and to feel like an athlete again.’

JAMES LEE WILLIAM AKA THE VIVIENNE

WHAT DID THEY SAY?: ‘To be the first drag artist to take part in one of the big UK reality competition shows is an honour and a big step forward for queer representation on TV.’

WHAT DID THEY SAY?: ‘I’ve got giant feet, I don’t skate and I can’t dance. My family has already made bets – they’re making bets that I’ll fall on the first episode!’

WHAT DID THEY SAY?: ‘I’ve always wanted to do it but I know I would never have been able to complete anything because of the way I was 18 months ago, so I’m really truly grateful that I’ve got it this year when I’m a lot stronger.’