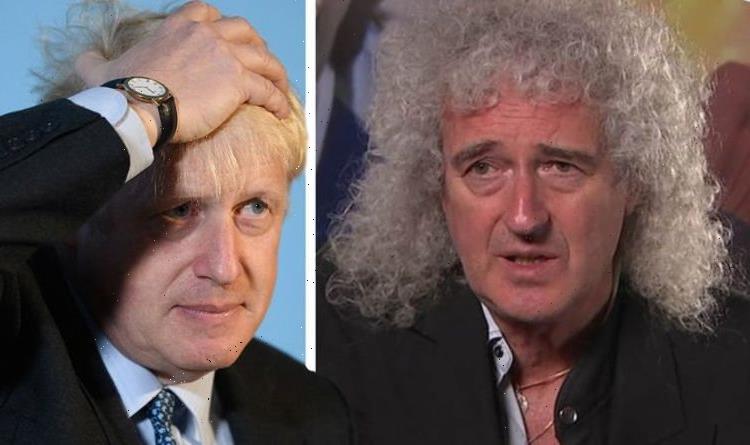 Brian May, 74, joined millions of others across the UK who have been left upset and angry by news that the Government have once again been caught breaking their own Covid rules while the population was either in lockdown or under strict restorations. So much so, that he slammed the “appalling low quality” of the Conservative party’s leadership online.

Disgusted at the appalling low quality of our leadership

Taking to his Instagram story in the early hours of Thursday morning, Brian shared his feelings alongside a clever video clip someone had made.

They had pasted Prime Minister Boris Johnson giving a speech in front of Number 10, where there was a Christmas party going on behind.

As an added bonus, the front door flung open and a cartoon Matt Hancock was seen kissing his colleague Gina Coladangelo; another nod towards the claims that the Government breached their own Covid rules.

He later resigned as health secretary and in a letter to the PM, he said the Government “owe it to people who have sacrificed so much in this pandemic to be honest when we have let them down”.

Alongside the video, the Queen guitarist made his feelings very clear.

He wrote: “Disgusted at the appalling low quality of our leadership?”

It comes after the Government was accused of holding a Christmas party on Friday December 18 in 2020, while the rest of the UK were told not to mix households.

At the time, the Tier 3 rules explicitly banned work Christmas lunches and parties.

On Wednesday, the PM addressed the claims, saying he was furious at the impression that Downing Street aides did not take Covid rules seriously.

He also apologised for a clip showing staff laughing about a festive gathering, saying: “I was furious to see that clip and I apologise unreservedly for the offence that has been caused up and down the country.”

He revealed he had been repeatedly assured that there was no party and that no Covid rules had been broken but that he has now asked the cabinet secretary to investigate what really went on.

However, footage obtained exclusively by ITV News was released on Tuesday where Boris’ then-press secretary Allegra Stratton, who stood down following the video, and adviser Ed Oldfield along with other aides, were filmed laughing about a “fictional” party in December 2020.

At the rehearsal on December 22, Mr Oldfield, a special adviser to the Prime Minister, asked Ms Statton: “I’ve just seen reports on Twitter that there was a Downing Street Christmas party on Friday night, do you recognise those reports?”

She grinned as she replied: “I went home”, before a discussion with colleagues about whether the event was a “cheese and wine” evening.

She then added: “This fictional party was a business meeting … and it was not socially distanced.”

Following the angry backlash over the video, Ms Stratton has since resigned as a government adviser.

She delivered a tearful statement on Wednesday, where said she would “regret the remarks for the rest of my days”.

Earlier this year, the former Health Secretary Mr Hancock, was also under increasing pressure to quit after the Sun published pictures and then a video of him and colleague Ms Coladangelo kissing, despite both being married with three children.

The newspaper said they had been taken inside the Department of Health on 6 May.

Fellow Tory MPs, as well as Labour and the Covid-19 Bereaved Families for Justice group, had called for him to be sacked for his actions and breaching social distancing rules.