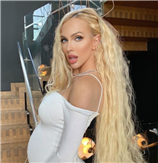 Christine Quinn may star on Selling Sunset, but the Netflix personality and real estate guru is now officially set to take on an even more important role:

Speaking to People Magazine on Wednesday, Quinn confirmed that she and husband Christian Richard welcomed a boy named Christian Georges on May 15, at 4:22 p.m. in Los Angeles.

How exciting and amazing, right?!?

“Baby C is more precious that I could have ever imagined. Nine months seems like a lifetime to wait to meet someone,” Quinn told People in response to becoming a parent.

Added Quinn in this statement:

“It is the most incredible feeling to know that you have created life. My protective mama bear mentality is stronger than ever.

“My sole job is to protect him, to love him and to raise him.

“Let’s just say he was born with good taste. He has a closet filled with designer outfits that I cannot wait to dress him in!”

The brand new mom and famous real estate agent explained that her water broke just after she came home to relax from filming season 4 of Selling Sunset.

“It was a giant gush of fluid, just like in the movies,” she detailed to People.

“I wrapped a towel around my waist and off we went to the hospital. Twenty-two minutes later, Baby C was born via emergency c-section performed by Dr. Steve A. Rad.

“He was incredible under the pressure and complexity of the situation.”

The reality star welcomed this perfect baby a mere two days after she attended the taping of the MTV Movie & TV Awards: UNSCRIPTED on Thursday, May 13.

She also had nothing but powerful praise for her husband and the way he acted during her labor and delivery process.

“He was very calm throughout the whole process.

“One day I might share more about what happened, but for right now, I am humbled and grateful that three of us came home from the hospital,” she said, sort of ominously.

As for what it feels like to actually be a mother?

“It was the most magical moment of my life,” Quinn told Peope of holding her son for the first time.

“Suddenly, there is a tiny human in my arms. It was surreal when I was finally able to hold him and kiss his little nose.

“I can’t believe that we created this little miracle.”

Quinn confirmed that she was expecting in February.

Yes, she said in the time since, she was “nervous” to give birth, but she also knew it would be worthwhile.

“It’s something that I’ve always looked forward to,” Quinn said back then of becoming a parent.

“I can’t wait to dress my little angel up in Gucci and Louis Vuitton and just make my baby so extra and over the top!”