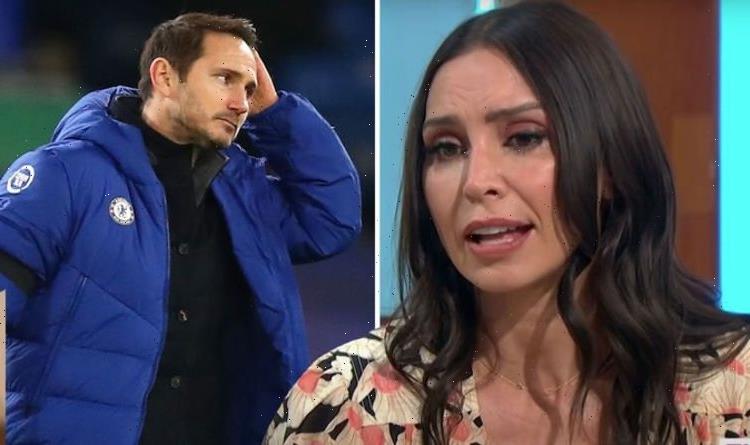 Christine Lampard has returned to the limelight after giving birth to the couple’s second child together Frankie earlier this year. As the 42-year-old prepares to take over from Lorraine Kelly on her show again, she candidly discussed her career and what’s been going on in the Lampards’ world.

Earlier this year, Frank Lampard, 43, was left gutted after he was sacked as Chelsea’s manager after 18 months in charge.

After finding out the news, the father-of-two released a statement expressing his disappointment.

As part of his message, he said: “I am disappointed not to have had the time this season to take the club forward and bring it to the next level.

“I want to thank Mr Abramovich, the board, players, my coaching team and everyone at the club for their hard work and dedication, especially in these unprecedented and challenging times.

“I wish the team and the club every success for the future.”

Reports at the time also claimed Christine was “devastated” by Chelsea’s decision.

She has now shared her thoughts on the matter in her own words.

Christine admitted watching Frank as a player and a manager was “horrendous”.

She added to The Telegraph: “You know how it was watching the penalty shoot-outs in the Euro finals?

“That anxiety we all had? For me, that wasn’t as bad as watching Frank play or Chelsea play when Frank was manager.

“That anxiety outweighed even the pleasure of a win.”

The presenter added that her spouse was “upset” by the decision, but she chose to think positively.

She explained: “I was pregnant; we were together.

“He couldn’t come to my appointments because of Covid, but he was there when Freddie was born. We had this blissful time as a family.”

Christine described Frank as a “smart guy” adding that he had been approached about other offers.

Elsewhere, as she heads back in front of the camera, the presenter went on to say she had missed being being glammed up for television.

“I’ve also had to re-engage my brain,” she added of her television return.

“But, to be honest, I’ve loved being at home with Frank and the children.”

Frank and Christine are also proud parents to two-year-old Patricia.

They first met each other in October 2009 at the Pride of Britain awards.