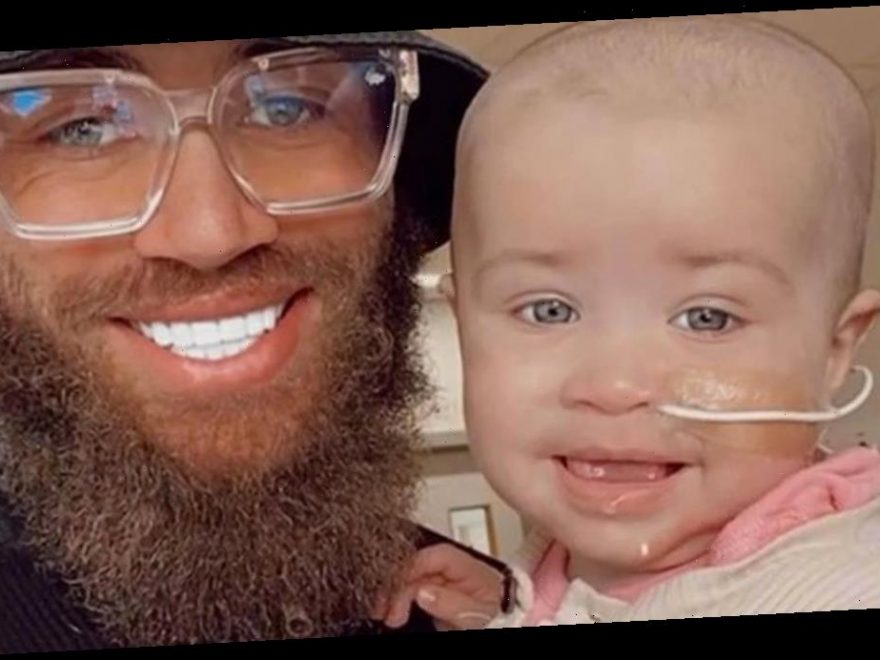 Ashley Cain has broken his silence after his fans and celebrity friends rallied together to beat the target for his fundraiser to save his daughter's life.

The 30 year old's seven month old daughter Azaylia was diagnosed with leukemia at eight weeks old and has battled the cancer ever since, with a number of failed treatments.

Ex On The Beach star Ashley and his girlfriend Safiyya Vorajee have now set up a Go Fund Me page with the hopes of flying Azaylia to Singapore for CAR-T therapy plus a haplo transplant.

Hoping to raise £1,000,000 to spend a year in Singapore with their daughter for the treatment, the online fundraiser has raised over £1,425,000 in just one day.

Ashley took to social media in the early hours of Monday morning to comment on the success of the fundraiser in an emotional video.

Filming himself in hospital where he stayed beside his daughter, he told his 848,000 Instagram followers, Ashley said: "Listen, yeah, I'm absolutely lost for words.

"I'm overwhelmed. The sheer amount of support that you guys have given us, those who have shared the post, people who have donated, honestly, the amount of kindness you have shown, the amount that you don't even realise how you've helped us, is just incredible, do you know what I mean?

"My family are eternally grateful to you guys. I mean, I didn't even… I've had the busiest day with consultants today, doctors, nurses, on the phone to pharmaceutical companies, looking after Azaylia, I didn't even know until tonight.

"I've gone on my phone and seen thousands of messages. I thought they were going to be saying we were close, the fact that we've hit it and that we're way above is just incredible so, listen guys, thank you. Thank you so much."

He continued: "Finally had time to lie down and relax and I'm just reading through some of you guys' messages from today.

"Honestly, the love, support and what you guys have done today has really touched our hearts. I keep saying it but I can honestly not thank everyone enough.

"I'm looking, I'm really tired and I've got pain in my eyes because we found out today that one of the essential drugs that Azaylia needs to start treatment with tomorrow in order to bring her leukemia counts down and get her into remission is not being released by the pharmaceutical companies, so not only today have I been looking after Azaylia but going trough heavy talks with consultants, doctors and pharmaceutical companies themselves to try and get this essential drug that Azaylia needs."

Ashley explained in the introduction on the Go Fund Me page how alongside their accommodation, the total cost of the trip and treatment would be "in excess of 1 million pounds with an initial deposit of £500,000 just to be accepted into the hospital and onto the program."

Writing a lengthy statement on the page, the star explained his daughter's history of battling cancer, from being diagnosed with AML leukaemia at the young age of eight weeks, to her recent full relapse which has forced her to undergo her fourth round of chemotherapy.

"After long discussions and a global outreach for treatment, our consultants along with consultants from around the world have come to the conclusion that the ONLY option to save Azaylia’s life is to fly to Singapore for CAR-T therapy plus a haplo transplant, for a minimum period of 1 year," he wrote.

"Because of the aggressiveness of Azaylia’s disease, we don’t have time on our side and we may have to fly out within a matter of weeks."