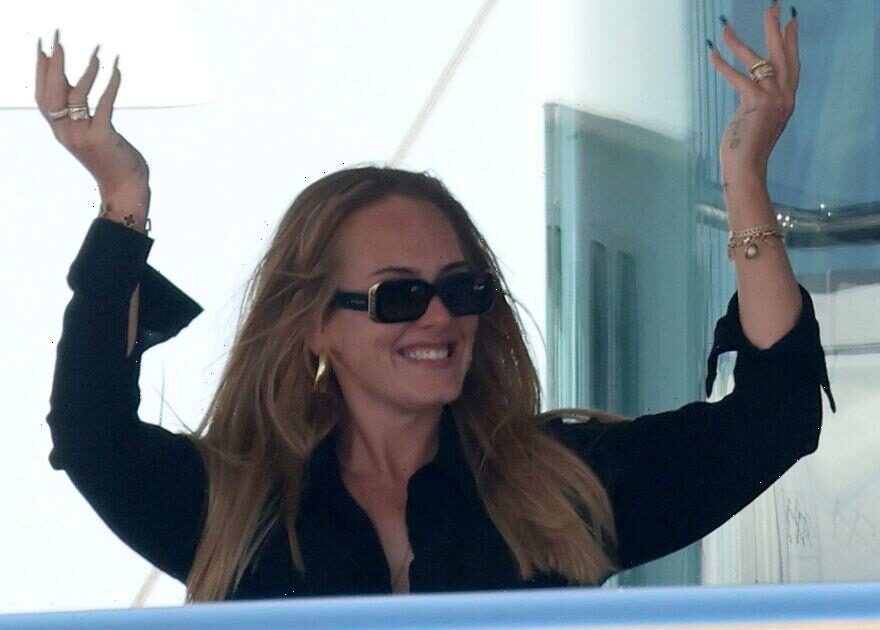 Global superstar Adele looked happy and relaxed as she giggled aboard a luxury yacht as she enjoys a lavish Italian boat trip with her boyfriend Rich Paul.

The Something Like You songstress, 34, looked fantastic in a black shirt dress as she threw her hands up in the air and laughed whilst chatting to friends, who were clearly in holiday spirits as they sipped on rosé wine.

Her dark blonde hair blew in the wind and she donned plenty of gold jewellery on her wrists, hands and neck, as well as a pair of chunky earrings and sunglasses to complete the look.

Mother of one Adele's American sports agent boyfriend, Rich, wore a bold printed shirt in hues of orange, red and pink and he looked as relaxed as his famous singer girlfriend as they enjoyed the sunshine.

It was the pair's second boat trip in days, as they were also seen aboard the multimillion pound yacht two days ago, with Adele dressed in an outfit worth just under £2,000 as she enjoyed a romantic getaway with her boyfriend.

Soaking up the sunshine aboard a luxury yacht with her boyfriend Rich Paul and a selection of pals, the singer was all smiles as she modelled a shell printed co-ord fresh from the rails of LOEWE x Paula's Ibiza collection.

Adele and Rich have been dating for just over a year, and they officially made their first outing as a couple in summertime last year when they attended the NBA finals to watch Milwaukee Bucks and Phoenix Suns play.

They then went "Instagram official" in September of last year, when they attended the wedding of NBA star Anthony Davis and Marlen P's wedding in Los Angeles, and Adele posted a number of snaps to Instagram, including a snap of of her and Paul cuddled up in the photo booth.

Adele previously opened up on her relationship with Rich in interviews with Vogue and British Vogue for their November 2021 cover stories.

She said of her boyfriend: "Rich just incredibly arrived. I don't feel anxious or nervous or frazzled. It's quite the opposite. It's wild."

In the interview, she also revealed that the two originally met at a party a couple of years before, when she joked to him, while "a bit drunk," "Do you want to sign me? I'm an athlete now."

The couple recently made the huge step of moving in together, confirming the news when Adele posted a snap of them stood in front of a huge mansion, both holding sets of keys as she wrote: "Time flies".

Adele is mother to a nine year old son, Angelo, whom she shares with her ex-husband, Simon Konecki, who she split from in 2019 after eight years together and three years married.