With his foreign assignments canceled for the year, a photographer refocuses on his homeland — and finds plenty to admire.

Waiting for northern lights. Snow is a good insulator, so digging a hole and lighting a fire is an excellent way to warm up.Credit…

Photographs and Text by Marcus Westberg

I consistently give the same advice to aspiring photographers: Wherever home is, that’s where you should begin.

It isn’t always easy advice to follow. After all, our understandable curiosity and fascination with the exotic — that which is different from what we are used to — sends us abroad by the hundreds of millions every year. And, having lived and worked everywhere but in Sweden for most of my life, I’ve been terrible at following it myself.

For me, Sweden has always been a place to rest, relax and spend time with family. It’s rarely been a destination to explore in the ways that I do in Madagascar, Malawi or Zambia — until now. 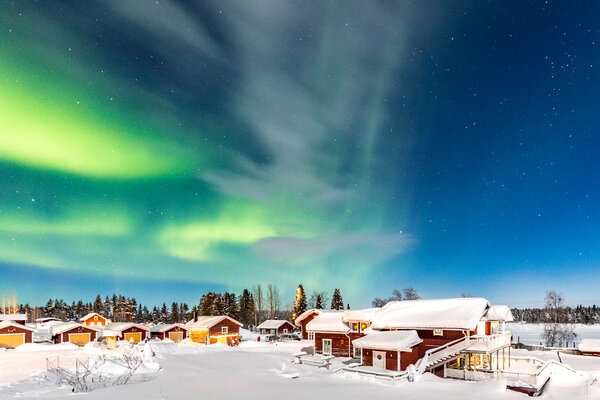 With all of my foreign assignments and trips canceled this year, I decided to make the most of the closed borders and travel north from my home near Stockholm. What began as a single two-week trip quickly turned into a series of journeys that lasted several months and spanned the entire year, starting and finishing in midwinter.

The first thing to know about spending winter in northern Sweden is that sunburn won’t be much of an issue. The second is that you’ll want to pack a headlamp and lots of warm clothes. Sweden spans roughly the same latitudes as Alaska, and, while climate change is bringing milder winters in its wake, it doesn’t have any impact on the length of our daylight.

And yet, traveling across the snow and ice on dog sleds, skis or snowmobiles, or laying on one’s back staring up at the magical light show of the aurora borealis, I hardly minded the lack of daylight. Instead, what caught my attention was the mesmerizing beauty of the white, frozen landscapes and the endless shades of blue. Away from buildings and roads, the snow lit up even the darkest nights.

Whether basking in a sauna or going for invigorating dips in the nearby river (through a hole in the ice), I spent virtually all of my time outdoors — which made exploring Sweden’s northernmost region, known as Swedish Lapland, about as safe as travel can be during a pandemic.

I was based mostly in and around the small hamlet of Kangos, and Johan Stenevad, my host at Lapland Guesthouse, showed me a world I had previously only seen in photographs: frozen bogs, lakes and rivers; gangly moose and curious reindeer; snow-covered trees; endless snow-shoveling; and a never-waning excitement whenever the sky was clear and the northern lights made an appearance.

But Johan opened my eyes to something else, too. One day, on a snowmobile path lined by tall trees on both sides, he turned off his engine and asked me what I saw.

He shook his head.

“Not a forest. A plantation. Soon, this is all that will be left,” he said, explaining that the straight rows of trees were being farmed. They were all the same species, age and size.

Johan was right. The great northern wilderness — the ancient boreal forests that once seemed endless — has been ruthlessly clear-cut for biofuel and paper and replaced by monoculture plantations of spruce or pine for over half a century. Only a fraction of the boreal forests remains, and that fraction grows smaller every year.

In addition, wind turbines up to a thousand foot tall are being constructed throughout northern Sweden, their flashing lights visible for tens of miles, the previously dark nights lit up like airport runways. Many such projects are being fought tooth and nail by local communities as well as conservation organizations.

“This will be the end of both tourism and of our communities,” Johan added.

Meanwhile, the Sámi — an Indigenous people who live mainly in the northern reaches of Sweden, Norway, Finland and Russia — are facing an existential crisis. Their lives and culture are inexorably linked to the old-growth forests and the reindeer who populate the region.

The slow-growing lichen and mushrooms upon which the reindeer depend for their survival are not found in pine or spruce plantations, so the death of one means the death of the other, and an uncertain future for an entire people.

“We are not visitors in nature,” said Brita Stina Sjaggo of the Luokta-Mávas reindeer herding district. “We are part of the forest, and the forest is part of us.”

Hers is a sentiment that resonates deep within me. It is one that too many of us have forgotten, and one that I believe to be essential for our own survival as well as that of the natural world.

Perhaps ironically, our curiosity-induced desire to travel — despite its undeniable impact on our climate — may prove to be one of our strongest assets in the race to save Earth’s biodiversity. What we come to know, we care about, and what we care about, we are willing to fight for. Not to mention that, for rural communities, tourism is often one of the strongest economic alternatives to logging, mining or otherwise commodifying the last of our wild places.

We will forever be curious about the world around us. And, since, curiosity often leads to understanding, I see this as an incredible net positive. But “the world around us” doesn’t have to be tens of thousands of miles away. The number of people who call a place “exotic” will always be greater than the number of people who call that place “home.” Perhaps we can learn to treat our local surroundings with the same level of engagement and the same willingness to listen as we do when traveling to faraway destinations.

As the year draws to a close, I find myself incredibly grateful for the opportunity I’ve had to explore the northernmost parts of my native Sweden. It truly is a wonderland, especially in winter. But I am equally grateful to have seen through the veil, allowing me to add my voice to the thousands of others who wish it to remain one of Europe’s wild wonders.

Marcus Westberg is a photographer and writer who focuses primarily on conservation and development issues in sub-Saharan Africa. You can follow his work on Instagram, Facebook and Twitter. You can also learn more about deforestation in Sweden here.