SAMANA, Dominican Republic — Martha Leticia Wilmore, a retired schoolteacher who lives in the port town with a population of roughly 100,000 people off the northeastern edge of the island of Hispaniola, has had the same Sunday morning routine for nearly all 90 years of her life: She eats a piece of sweet bread, drinks a cup of ginger tea and gets dressed in a freshly pressed blouse to attend the service at the African Methodist Episcopal (A.M.E.) church, one of two places for worship for the community as it branched off years ago from St. Peter’s, locally known as “La Churcha.”

Ms. Wilmore is a descendant of a group of more than 300 African-Americans who chartered a boat to Samana in 1824 from Philadelphia. For her and 10 other older community members, ranging in age from 80 to 104, attending the weekly church service is a way to preserve the history of the early African-American settlers, passed down through songs and the English language. It is a history that many fear will be forgotten. 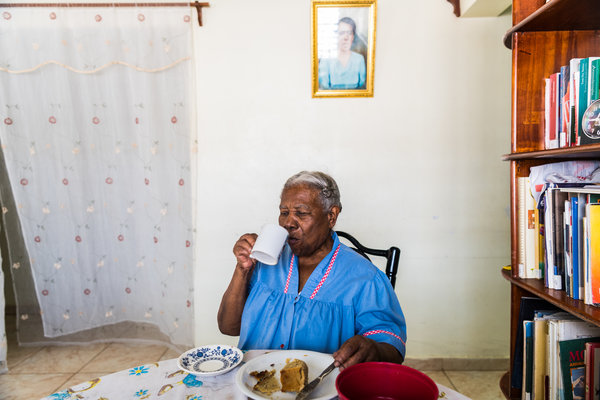 “The church is where I go to praise God and preserve my family’s story,” Ms. Wilmore said from the living room of her home in the Wilmore neighborhood, established by her great-grandparents.

Inside St. Peter’s Evangelical Church, the oldest church in town that was founded by the settlers, a group of children sang “Amazing Grace” in front of a crowd filled with congregants who sang along while wearing an assortment of white outfits.

“It’s a beautiful story and if they don’t know it, it will get lost,” said the Rev. Jerlin Feliz Diaz, 45, pastor at St. Peter’s Church.

The history is rich, beginning in the early 1800s when President Jean-Pierre Boyer, one of the leaders of the Haitian Revolution, used land and resources to lure black Americans, many who were freed slaves, to the island that he and his compatriots had just overtaken. in 1824, Rev. Richard Allen, an A.M.E. Church pastor, led a group to the region, according to Ryan Mann-Hamilton, an anthropology professor at LaGuardia Community College and a descendant of those immigrants.

The Haitian control of the island has been recalled by some Dominicans as a brutal period, complicating the community’s relationship with its new neighbors. The town of Samana, where the African-American community settled though, was geographically isolated, further insulating them from Dominican society, complicating issues of identity and acceptance on the island.

The relocation to the Dominican Republic came during a back to Africa movement for black people in the United States, Professor Mann-Hamilton said. Some estimates claim that as many as 6,000 African-Americans migrated throughout the island and as many as 13,000 went to West African countries like Liberia and Sierra Leone.

“There was a large issue dealing with what to do with freed black people during this time period,” Professor Mann-Hamilton said.

All passengers on that original ship to Samana obtained their freedom by escaping the slave-owning South or by purchasing their own freedom papers. They hailed from A.M.E. churches in the South and throughout the Eastern Seaboard and had surnames like Sheppard, Hamilton, Wilmore and King, which continue to be common throughout the port town.

Establishing a viable church became the focus of the group in 1824. African-American cultural practices have been preserved through the weekly church activities, which continue today. English was spoken in homes and in schools established by the churches, and other culinary and cultural traditions were passed along, like gingerbread and “johnny cakes,” a cornmeal flatbread.

In 1930, however, the use of English was stigmatized by President Rafael Trujillo, a brutal dictator. He began a process to “Hispanicize” the entire nation by implementing Spanish-only laws in the region, which he enforced through tactics like physical violence and imprisonment. He closed down English-speaking schools and exhibited violence toward any religious or cultural practices that had roots in African tradition. For the settlers, a black migrant group brought in by Haitians, a culture and community was at risk.

“His people banned us from speaking the language we had grown up speaking,” said Franklin Wilmore, 75, a local music instructor and weekly A.M.E. church attendee. Many people in the community who only spoke English and had to learn Spanish, developed a hybrid “Spanglish” language in the meantime.

In 1979, things changed when cruise ships starting arriving in Samana. Ricardo Barrett Green, 64, who grew up speaking English before the ban, was one of the first descendants to get hired by Carnival Cruises to translate for English-speaking tourists.

Connecting to the music and songs of their black American ancestors has been important to the community. Lincoln Phipps, 86, a retired music instructor and member of St. Peter’s, grew up playing the trumpet in the church and continued as an adult. He doesn’t play in church anymore, but he plays his trumpet and sings gospel songs like “God Will Take Care of You” at home for his wife. Mr. Wilmore now teaches music composition as well as African-American spiritual hymns he learned as a child to school-age children.

Ms. Wilmore and many of the descendants of the 1824 wave of African-Americans, have a complicated definition of their Dominican identity. While they were born in Samana, and in many ways feel Dominican, they acknowledge their roots in African-American history and have yearned to connect with distant relatives in the United States.

“Singing with African-Americans has been one of the greatest experiences for me,” Ms. Wilmore said, describing her experience traveling to Atlanta several times to participate in A.M.E. church events. “I’ve always felt more connected to black people in the U.S. than in the Dominican Republic.”

Others, however, have not been able to travel to the United States. When the African-American settlers arrived in Samana in 1824, the government gave many of them medals to distinguish themselves as Americans. The medals were intended to both celebrate their arrival and were initially told that it would allow them to return to the United States. But many cannot return because their medals were lost and many of their documents have been destroyed over time.

When Barack Obama was elected as the United States’ first African-American president in 2008, Wilfred Benjamin, 45, a local tour guide and cultural preservationist, pursued a longtime hope: He drafted a letter to the U.S. government asking for Samana residents to be recognized as the descendants of African-Americans. There was no response.

“There’s no way to identify our history,” Mr. Benjamin said. “There’s no statue or official order or cultural center.”

Zoila Henriquez, 46, Pastor Diaz's wife and an active member of the St. Peter’s Church, is leading an initiative to preserve the historical documents that are stored in a black suitcase inside the church. In addition to visiting the elder members of the church who can no longer physically attend Sunday services, she spends hours trying to preserve original immigration documents from the church’s founding members.

“So many of the documents that we have are crumbling because they haven’t been cared for in a proper way,” she said while she sifted through the church’s records, reading the dates and names of the settlers. “We have the names of each of the original descendants but it’s nearly impossible to restore them because they are nearly crumbling.”

While the older descendants of the African-American settlers are faced with the fear of losing touch with their history, younger descendants like Jose Jones, 20, who consider themselves Dominican and speak only Spanish, know they have a history with roots in African-American culture that they feel pressure to preserve.

“The only history that we learned about was the story of Cristobal Colon, who came here and discovered this area,” Mr. Jones said over the sound of a baseball game played near the center of town. “Our ancestors left what they had in the U.S. and came here and we’re trying to learn more about them.”