On the island of Texel, part of the Frisian archipelago, the 52 Places Traveler finds a place of quiet charms and a meal that sparks an obsession. 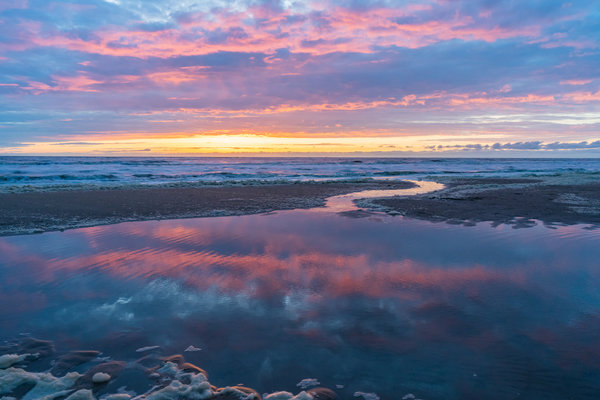 Our columnist, Sebastian Modak, is visiting each destination on our 52 Places to Go in 2019 list. He arrived in the Frisian Islands after being overwhelmed by the scenery in Vestlandet, Norway.

Something’s amiss with one of Jan-Willem Bakker’s lambs. He can tell from 30 feet away as we approach the flock on a quad bike.

“Look at its ears,” he says, turning to me with an expression of concern on his sunburned face.

The sun is shining in a wide-open blue sky, making the flat green horizon appear infinite. Mr. Bakker climbs off the bike and approaches the lamb, which, now that he mentions it, does look forlorn, with folded down ears, silent while the flock of sheep around it bleats away. Gently pushing the others aside, Mr. Bakker picks the lamb up and carries it over a fence. There, he takes out a thermometer, checks its temperature (a little higher than it should be) and begins administering a series of injections, all natural painkillers and fever reducers.

“I only use antibiotics if things get very bad,” the eighth-generation sheep farmer says. “And then, I still treat the sheep individually. On this island, the nature is connected and we can’t break the system.”

This island is Texel, an oblong speck of land just off the Dutch mainland. It’s one of the Frisian (or Wadden) Islands, an archipelago that stretches east along the coasts of the Netherlands, Germany and Denmark. They were on the 52 Places to go in 2019 list for their emphasis on sustainable tourism and local foods.

Texel is the biggest of the Dutch islands, and is a popular getaway for Amsterdammers, though it is largely off the radar of more far-flung vacationers. With a maximum elevation of around 80 feet, the island is crisscrossed by bike lanes that run between its seven villages and the protected national park lands and farms that cover the rest. Though reportedly packed in the summer, when I arrived in the final days of spring, it was still largely empty. I pedaled up and down the entire island at least three times and could coast for 40-minute stretches without seeing another person. The crisp air carried whiffs of farm animals and sea salt, and migratory birds making pit stops competed with vocal sheep for airtime.

I ended up in borrowed coveralls and rain boots on the back of Mr. Bakker’s quad bike during his feeding rounds after showing up at his farm, De Waddel, unannounced that morning.

The night before I had tasted the best lamb I have ever eaten at Bil Jef, a restaurant and hotel in the village of Den Hoorn less than four miles from the farm, and I had decided to go looking for its source.

I was ushered into the kitchen by Mr. Bakker’s mother, who spoke rapid-fire Dutch (which I do not speak) while motioning at me to take a seat. She brought out a young volunteer who told me, in English, to come back a few hours later to meet Mr. Bakker — and his 400-odd sheep.

According to Jef Schuur, who opened Bil Jef in 1996 with his wife, Nadine Mogling, an award-winning sommelier, Texel was a “culinary desert” when they started. Ingredients were imported, tourism was in its infancy and no one saw the point of going for a concept higher than basic.

“But then you start seeing what’s in your own neighborhood,” said Mr. Schuur, who grew up on Texel but cut his teeth at critically acclaimed restaurants across Europe. “I never went in thinking I would create a Michelin-starred restaurant — I just wanted to make what I like and experiment with what we have.”

In 2009, Jef and Nadine received a Michelin star and they’ve maintained it every year since by focusing on the special things that Texel offers, including its famed white asparagus, seafood and, of course, lamb, sourced from Mr. Bakker down the street.

“We live by the seasons and every season has its own nature, its own beauty,” Mr. Schuur told me, before I experienced his “Local Meets Cosmopolitan” seven-course prix fixe menu.

For spring, that meant a whirlwind of raw fish, fresh vegetables given a subtle saline boost by the seawater that seeps into the soil, and lamb that immediately wipes away any thoughts about how soft and cuddly the ones were that you saw on your bike ride to the restaurant. There was a raw razor clam, churned into a soft tartare to be slurped right out of its long shell; two lamb courses, one a flank cooked to perfection, the other a shoulder brined for 36 hours and cooked for 12; and mackerel, accompanied by shaved raw asparagus and chorizo herbs, the spice mix used in the Iberian sausage.

The three-hour meal was magnified by the fact that I was alone, mindful of every bite. By the time dessert rolled up — Pernod ice cream with blood orange chunks and topped with a chip of caramelized tarragon — I was in a state of euphoria. The next morning though, a little more clear-headed, I had one mission: Track down that lamb.

Getting to Texel from Amsterdam on public transit is easy — about 2 hours, door to door. Take the train from Amsterdam Central to Den Helder, then a quick city bus ride to the ferry terminal where you’ll board the TESO ferry that leaves every hour. A bus and shuttle network connects the villages on Texel.

The best way to get around the island though is on two wheels. Just be warned: on a flat island in the North Sea wind can be intense. By my third day, I had swapped my rented bicycle for an e-bike after being beaten down one too many times. Bike rentals spots abound across the island. I went with Stella Verhuur, in Den Burg.

Accommodations run the gamut, from guesthouses in the middle of nowhere to trendy hotels that wouldn’t be out of place in Amsterdam (there are plenty of Airbnbs too). I went with De Smulpot, a collection of modern rooms hidden behind a popular restaurant and bar in Den Burg. It’s central location and delicious breakfast spreads were fantastic, but I do wish I had split my time between there and somewhere more rural.

Texel is the kind of place that lends itself to fits of fancy, like showing up at a farm hoping to meet some sheep. You can cycle from its southern tip, where the ferry from the mainland pulls up, to its northern point, where the Platonic ideal of a lighthouse stands amid the dunes, and still have a whole day to fill. On any given Monday you can spend a whole morning cataloging the breadth of things for sale at the market that fills the streets of Den Burg, the largest town on the island: a woman with baskets filled with homespun wool; a man churning out poffertjes, tiny pancakes blanketed in powdered sugar; another showing off an implement presumably of his own design, an extendable squeegee used to wash second-floor windows from the ground.

It makes sense that Texel is the place where Dutch city-slickers come to get away from it all. But could this — an island of just 13,600 people — sustain the pressures of mass tourism? Probably not. But then again, many people might find it — dare I say it? — boring. The landscape, dominated by impossibly flat greens, is monotonous, unless you see it as hypnotic. The island’s offerings — swimming, hiking, eating, cycling — are limited, unless they are enough. Its residents are far more interested in their own lives than they are curating an island experience for you. Time slows, and you have to be able to revel in that lag.

On my day shadowing Mr. Bakker on his feeding rounds, I asked if he accepts tourist visits.

“We do bring in groups — from organized tours or companies — to show them around, but in general we’re too busy working,” he said. “But for individual tourists, if somebody comes up to the shop to have some cheese, my mother will make the decision of whether they are O.K. to come on the farm or she just waves, ‘Bye-bye.’”

And has Texel changed a lot during his 40 years on the island?

“I’d say no, because this farm has always been my world,” he said. “But if anything, we’re more hand-in-hand than ever before. Forty years ago, most of the restaurants on the island were still serving lamb from New Zealand, but now nearly all of it comes from the island. It’s just made us stronger as a community of farmers, butchers, chefs.”

I’ve tried to relish at least one specific moment per place on this trip. I think about how the ground feels against my feet, how the air feels against my skin. I file it away in a mental folder of happy places, moments I return to in times of stress or sadness. In the case of Texel, that moment came on my last evening on the island, after my afternoon with Mr. Bakker. Thirty minutes before sunset, on a whim I rode west until I hit one of the many beaches that run along the Dunes of Texel National Park. The wind blew sand into my shoes and a chill descended as the horizon above the North Sea lit up in every shade of fire. I turned around to see a deep lavender sky, a rainbow — yes, a rainbow — stretching over the blue and white beach shacks that dotted the beach. Forty five minutes passed and only then, as night overtook day, did I realize I was the only person around.

Sebastian Modak is the 2019 52 Places Traveler. Before being selected to report on the annual New York Times list, he worked at Condé Nast Traveler as an editor and staff writer. @sebmodak