It looks like a pair of globetrotting friends have set a new world record by travelling 1,600 miles to visit nine capital cities in the space of 24 hours. 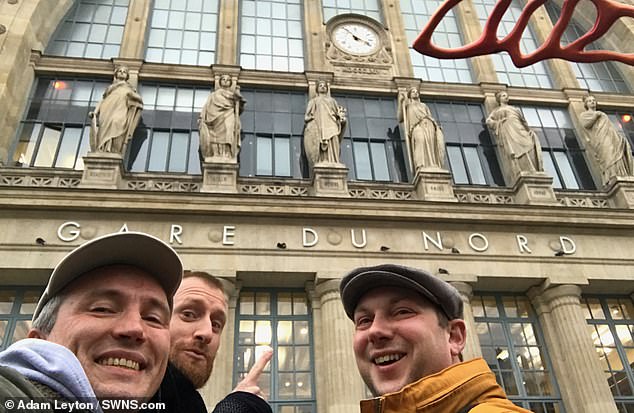 Adam Leyton, left, and Chris Fletcher, right, pose outside Gare du Nord station in Paris. The globetrotting friends appear to have set a new world record by travelling 1,600 miles to visit nine capital cities in the space of 24 hours 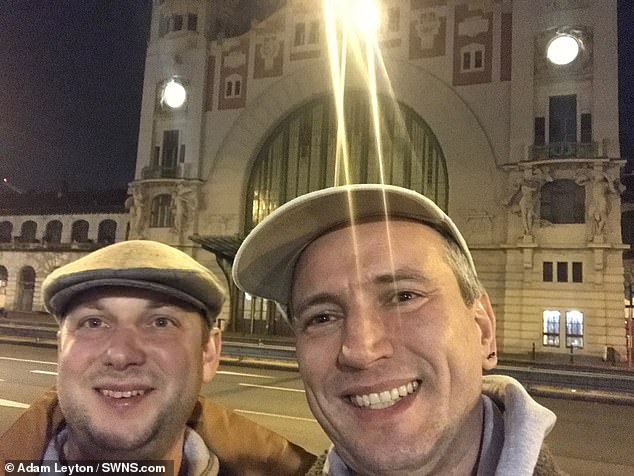 The duo took seven trains, five buses, and two flights to stake a claim the record. They are pictured here in the Czech capital, Prague 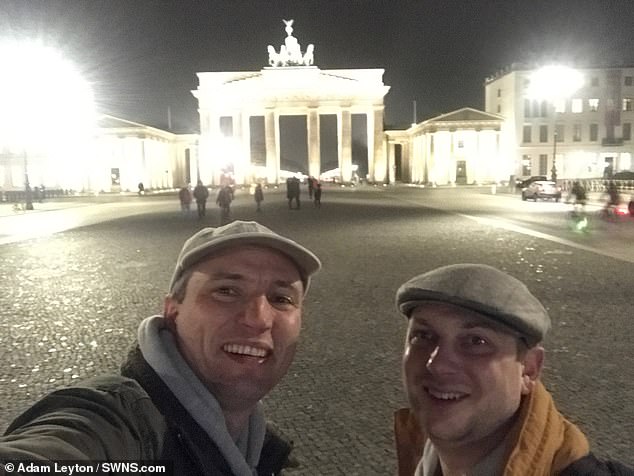 Adam and Chris snap a selfie beside the Brandenburg Gate in Berlin. The German capital was the fifth stop on their journey 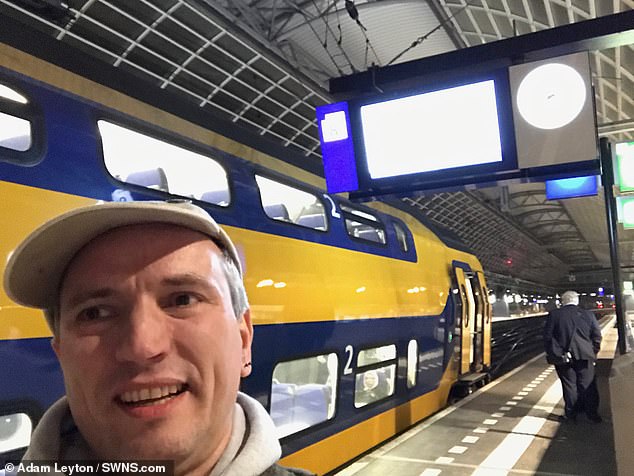 Business partners Chris and Adam almost missed out on the record, arriving at their final destination with only ten minutes to spare.

But they didn’t hang around to enjoy the tourist hot spots, spending only four minutes in Bratislava and ten minutes in Brussels.

Their exhausting trip, to raise money for a stillbirth and neonatal charity, began in London on Sunday when they took the Eurostar to Paris.

Their voyage almost came to an end in France when a suspicious package was found on a train platform, delaying their connection to Brussels.

From Belgium the pair got a train to Amsterdam’s Schiphol airport, where they ran ‘like a pair of mad men’ to make their flight to Berlin.

After reaching Germany, they took a night bus to Prague and then caught a plane to Bratislava in Slovakia.

Their final journey through the air saw them travel to Vienna, where they caught a train to Budapest, arriving on Sunday morning. 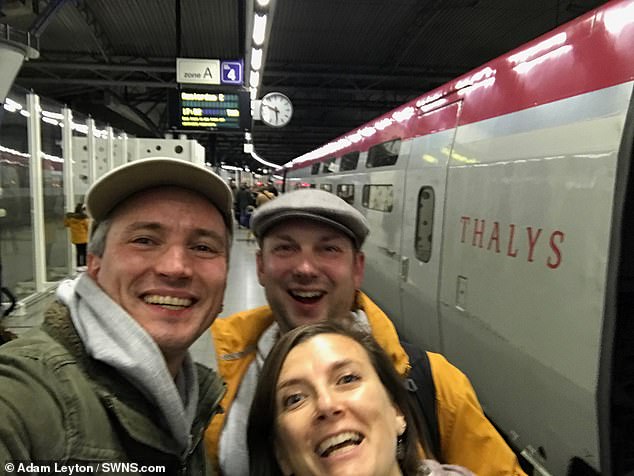 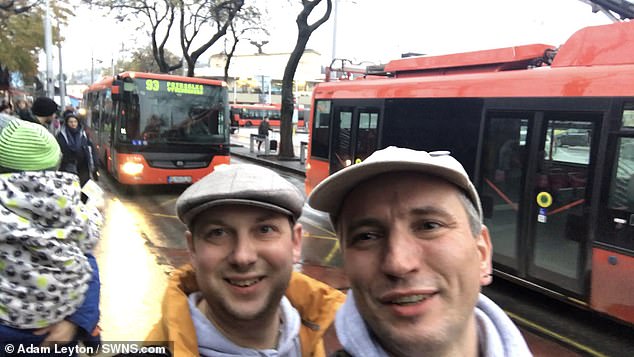 The pair, who co-own a digital marketing agency called CEE Digital, are now awaiting their certificate from Guinness World Records. They are pictured here in Bratislava

Adam then flew back to his home in Edinburgh and Chris travelled back to Leeds, West Yorkshire.

The pair, who co-own a digital marketing agency called CEE Digital, are now awaiting their certificate from Guinness World Records. The current record for capitals visited in a day stands at eight.

Chris said: ‘We thought the first half of the trip was going to be quite leisurely but it turned out to be a nightmare of stress and panic.

‘We didn’t think we were going to get through the gate at Amsterdam but we got lucky in the end. 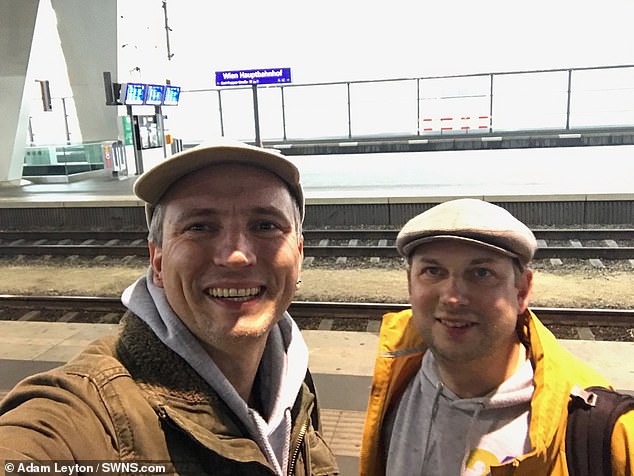 The duo stand on the platform of a railway station in the Austrian capital, Vienna, while trying to set the new world record 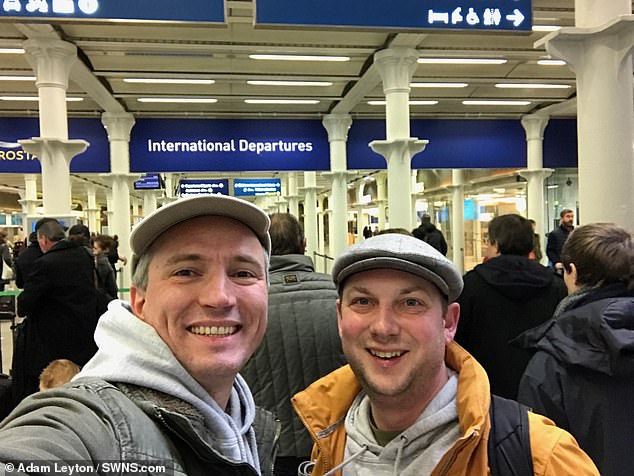 The trip began in London, pictured, when the pair took a Eurostar train to Paris

‘The trip basically involved all the worst bits of travelling without any of the enjoyable things, like sightseeing and having a drink.

‘Fortunately the second half of the journey went quite smoothly, although we only got into Budapest with ten minutes to spare.

‘It was such a relief in the end, we were both exhausted and ecstatic.’

The whistle-stop tour was organised to raise almost £1,000 for stillbirth and neonatal charity Sands. 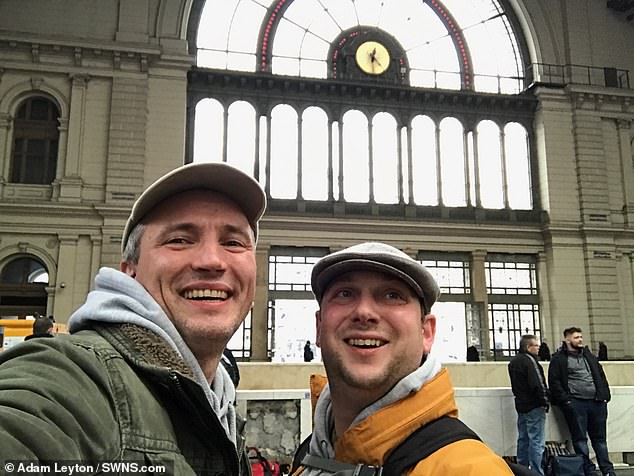 The two men made it to their last stop, Budapest, pictured, with just 10 minutes to spare

The cause is close to Adam’s heart after his sister Gemma, lost her baby daughter just five days before she was due to be born.

Adam said: ‘Sands is a brilliant charity providing support for families who suffer the same kind of loss as my sister.

‘It’s great to raise some money for them and get some exposure.’