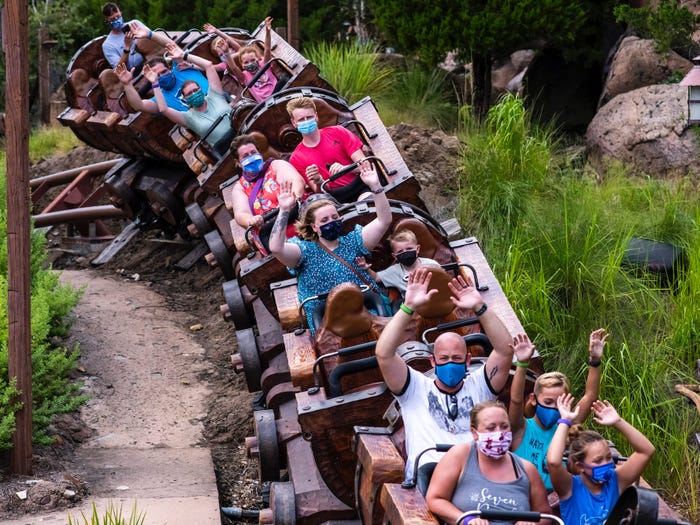 Disney World is seemingly relaxing some of its COVID-19 safety precautions at its Orlando, Florida, theme parks.

According to people who have recently visited Animal Kingdom, Hollywood Studios, and other parks at Disney World, employees are now filling every row of ride vehicles at some of its most popular attractions. In the past, Disney has left empty rows between riders to maintain social distancing.

On Twitter, numerous Disney fans pointed out that Expedition Everest, a roller coaster in Animal Kingdom, is seemingly now seating guests in every row.

When the theme park first reopened during the pandemic, Expedition Everest would be stopped every two hours for a 15-minute cleaning, according to WDW News Today. It's currently unclear if this is still part of Disney World's safety efforts.

It's also unclear if recent photos of Expedition Everest show large families seated together in the same ride vehicle, or multiple groups seated directly behind one another.

That being said, Disney-themed news outlets have reported that other popular rides have also updated their social-distancing protocols. WDW News Today reported that Rock "n" Roller Coaster at Hollywood Studios is filling every row of its ride vehicles, meaning two separate groups could end up sitting in the same car. However, the publication added that "each party is given their own row," so single riders are sitting without anyone next to them. The same seemingly goes for the park's Slinky Dog Dash ride.

On Twitter, some Disney fans expressed concern over this potential change in protocol, as they worry about masks falling off during rides, and therefore potentially increasing the risk of spreading COVID-19.

In a previous interview with Insider, Dr. William Schaffner — a professor of infectious diseases at the Vanderbilt University School of Medicine in Nashville, Tennessee — said the risk of spreading viruses like COVID-19 increases when people travel, especially through public transportation.

Considering how many tourists visit Disney World, especially around the holidays, that could be a dangerous sign for those sitting close to strangers on rides.

"If you travel by car, you're in control of your environment," Schaffner told Insider. "But if you're going by air, train, or another mode of public transportation, that increases the risk."

Schaffner also talked about the dangers of being a "dreaded spreader," or a seemingly healthy person who is unknowingly spreading COVID-19.

"You can spread the virus to others who will, as a consequence, become seriously ill, because they're older or have diabetes or some heart disease," he said. "You don't even know you're spreading this virus because you can have minimal or no symptoms."

"That's the whole concept behind all of us having to be prudent, careful, masked, and socially distanced," he said. "This will be the new norm for months. We can't turn this off like a light bulb."

Representatives for Walt Disney World did not immediately respond to Insider's request for comment.