They have not been around as long as roller coasters and carousels, but log flume rides have been thrilling – and dousing – visitors for decades.

The concept of the amusement park staple is fairly straightforward. Mimicking timber floating downstream to a lumber mill, passengers sit in hollowed-out “logs” and meander along a winding flume. Typically, conveyer belt-style lifts bring the vehicles up a hill, and then gravity and the water’s current keep them moving through the flume.

But unlike roller coasters, which usually unleash their biggest drops near the beginning of the ride, flume rides save the suspense for their finales. In addition to plummeting down a hill, riders get soaked – or at least a bit wet – when the vehicles hit the splash pool at the bottom.

The first-ever log flume ride debuted in 1963 at what is considered the first regional theme park: Six Flags over Texas in Arlington. Located in the Spain section, the historic ride is known as El Aserradero (The Sawmill). It proved so popular that Six Flags added a second flume adjacent to the first one in 1968 to accommodate the crowds. 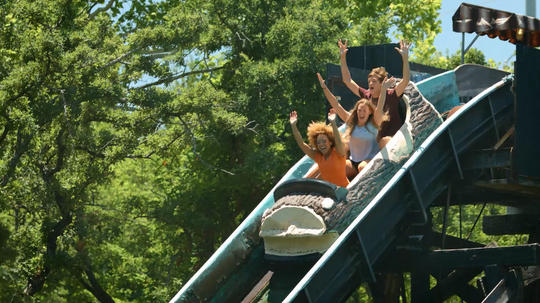 The first-ever log flume ride debuted in 1963 at what is considered the first regional theme park: Six Flags over Texas in Arlington (Photo: Six Flags Over Texas)

El Aserradero set the template as parks scrambled to build their own flume rides.

A few attractions acknowledge the sawmill theme with modest scenic elements. But most log flumes forego storytelling and just stick to the ride experience. A handful of flumes, however, incorporate effects and show scenes, some of which are quite elaborate, to engage passengers along the route.

Log on and check out some of parkdom’s more intriguing flume rides in the U.S. 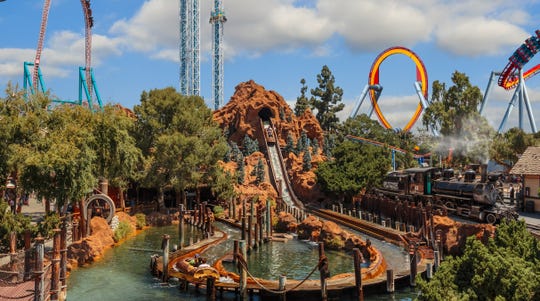 The classic attraction is celebrating its 50th anniversary this year. It opened with a Hollywood splash in 1969 when John Wayne, a friend of founder Walter Knott, took the inaugural ride with his son. Housed in a mountain at the center of the park, the attraction fully embraces its nineteenth-century lumber camp theme with scads of animated tableaus located on both sides of the lift hills and throughout the ride.

In 2013, Knott’s gave the Log Ride an extensive makeover, returning it to its former glory. Its animatronic characters, including timber yard workers, old coots, and critters received modern updates, but thankfully, they retained their retro look. To stoke anticipation just before the climactic 42-foot plunge, a character bearing explosives shouts, “Fire in the hole!” 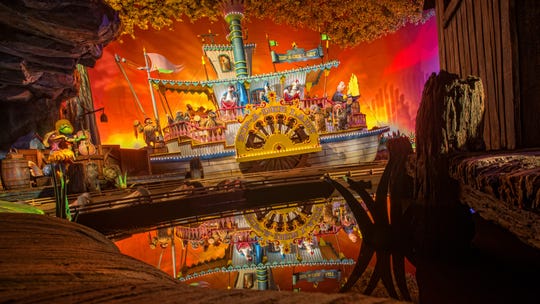 Amid all of the lighthearted fun at Disney's Splash Mountain, there is an undercurrent of anxiety, as passengers know the ride’s inevitable big plummet and splash could be just around the bend. (Photo: Paul Hiffmeyer/Disneyland)

There isn’t a sawmill in site, so it’s unclear why guests climb into logs to experience Splash Mountain. Still, it’s a hoot to float through the enchanting E-Ticket attraction and ogle its lavish scenes.

Splash Mountain features characters from Disney’s 1946 film, “Song of the South,” and tells the story of Br’er Rabbit, who is on a journey to find his “laughing place.” The ride includes over 100 animal animatronics, many of which Imagineers repurposed from a shuttered Disneyland attraction.

Amid all of the lighthearted fun, there is an undercurrent of anxiety, as passengers know the ride’s inevitable big plummet and splash could be just around the bend. Disney amps the angst by including a mini drop in the dark before the real deal. When it finally does come, the 40-mph, 52-foot dive down the mountain delivers the thrills. The show continues after the plunge with a chorus of critters belting out “Zip-a-Dee-Doo-Dah.” 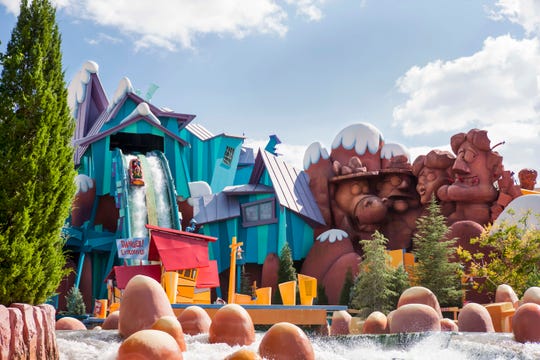 Based on the “Dudley Do-Right of the Mounties” animated shorts from  TV’s “The Adventures of Rocky and Bullwinkle,” the unabashedly cartoonish Ripsaw Falls features the same kind of dumb-yet-but delightful puns and silliness that characterized Jay Ward’s classic series.

Like the show, which paid homage to silent film melodramas and presented variations of the same basic plot in every episode, the not-too-sharp Canadian Mountie tries to save damsel-in-distress Nell from the evil Snidley Whiplash.

In contrast to Knott’s Log Ride and Splash Mountain, Ripsaw Falls’ characters are static, and the show scenes are fairly primitive. But in typical Universal fashion, the attraction really pours on the thrills. It delivers two drenching, mid-ride plunges as preludes to its finale, a 75-foot doozy of a double-down drop.

It might seem odd to have a log flume ride at an indoor, climate-controlled park, but it’s also practical. Otherwise, Nickelodeon Universe, located in chilly suburban Minneapolis, could only operate its water ride few months of the year without giving its customers pneumonia. Still, the Log Chute kindly keeps the splashing to a minimum.

If some of the old-timey, sawmill-themed scenes resemble the ones from Knott’s Log Ride, it’s no accident. The Knott’s folks originally built the park, and it was first known as Knott’s Camp Snoopy. But in a a nod to Minnesota folklore, the attraction also includes a cameo from Paul Bunyan and Babe the Blue Ox.

If riding a log flume inside a mall is odd, imagine one that cuts right through the middle of a casino. Adventure Canyon Log Flume gives new meaning to the gambling expression “let it ride.”

The adventure begins outdoors as passengers climb up and into a mountain and then splash down. They next enter the casino and pass Old West scenes as well as curious patrons. As a bonus, Adventure Canyon doubles as kind of a moving shooting gallery. Riders are issued guns that they can aim at targets embedded along the route.

Mossi, a Label Built Around a Social Mission

Cheryl Burke Is 2 Years Sober: It Was a Decision ‘I Made for Myself’

Treasurer calls on Andrews to allow all students back to school

Fans Call Anna Duggar an Inspiration, Say Husband Josh Duggar Is 'Lucky' She Stayed With Him After Scandals