Sitting along a barren Texas highway in the middle of the desert is a lonely Prada storefront — but get closer and you'll see the store is not exactly what it seems.

Prada Marfa, the brainchild of Berlin-based artists Michael Elmgreen and Ingar Dragset, is actually a sculpture of the luxury boutique, made completely out of biodegradable materials. The artists' goal was to leave Prada Marfa completely untouched, slowly watching it decompose into nature and serving as a subtle nod to American consumerism and retail tourism.

However, within days of completion, the sculpture was robbed and graffitied. It has become the subject of continuous vandalism and controversy, yet it still remains as an iconic tourist destination for tourists and even celebrities.

Here is a look at the lone Prada store in the middle of the desert.

A few miles outside of Valentine, Texas, is a fully stocked Prada store on the side of a barren highway. 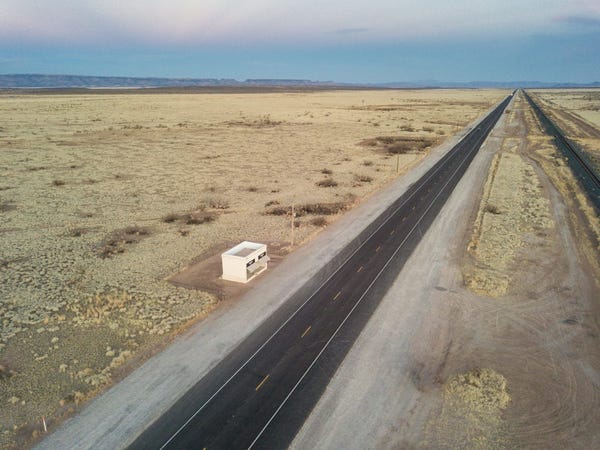 The storefront looks exactly like the classic Prada store found on Rodeo Drive or Fifth Avenue, however this time, it's in Valentine, Texas, a town with a population of 127 people.

While it appears to be a classic-looking Prada store, Prada Marfa is actually a "pop architectural land art project" by artists Michael Elmgreen and Ingar Dragset. 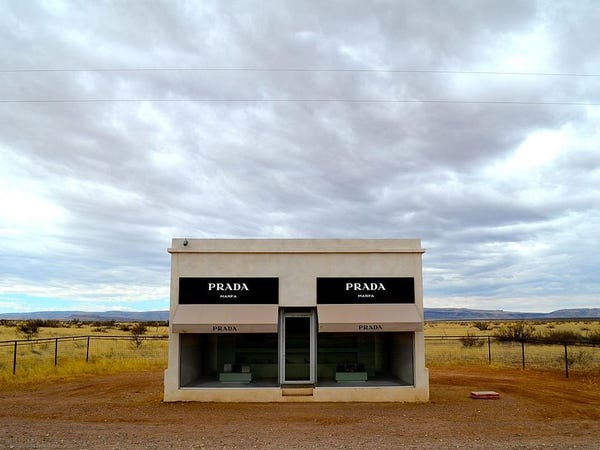 According to Atlas Obscura, the sculpture is designed "as a surrealist commentary on Western materialism." It is constructed entirely from a biodegradable material that is meant to gradually decay.

Their work touches upon the rising culture of consumerism, gentrification, and retail tourism. 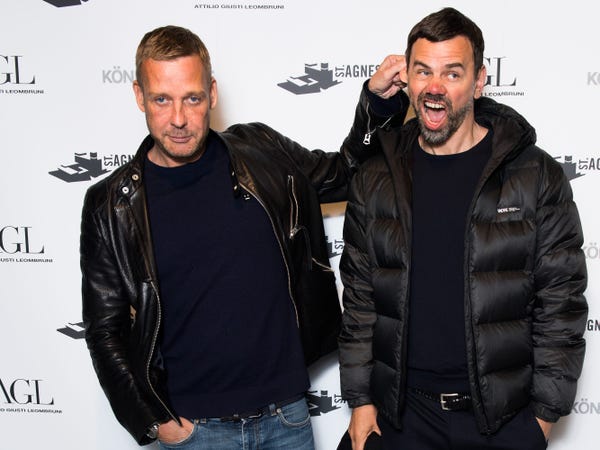 Before creating Prada Marfa, Elmgreen and Dragset were living in the eclectic New York City art scene in the early 2000s. According to Vogue, the duo was pushed out of the SoHo neighborhood, which had been taken over by luxury boutiques, and forced west to Chelsea.

In Chelsea, they playfully constructed a sign on a gallery that read "Prada, Coming Soon." The sign was a subtle nod at the effects of gentrification driving consumerism, and it caught the eyes of creative consultants Yvonne Force Villareal and Doreen Remen, who ran a non-profit called the Art Production Fund. They immediately jumped into collaborating with Elmgreen and Dragset on Prada Marfa.

In an artistic nod to modern-day consumerism, they created a single-room replica of real Prada stores found in cities around the world. 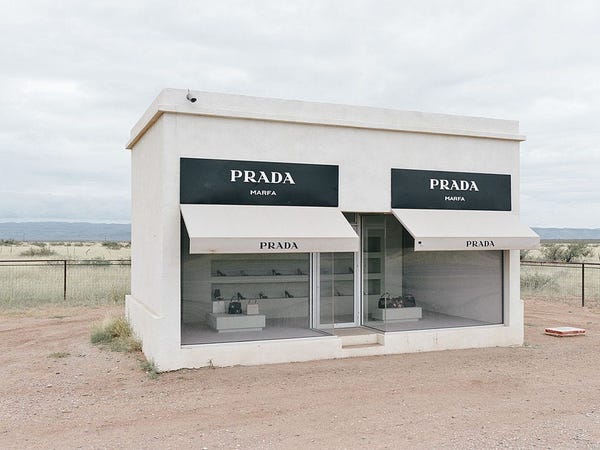 They worked with Ballroom Marfa, a contemporary art museum in Texas, to bring their vision to life.

Prada Marfa is made from white adobe, a regional material. 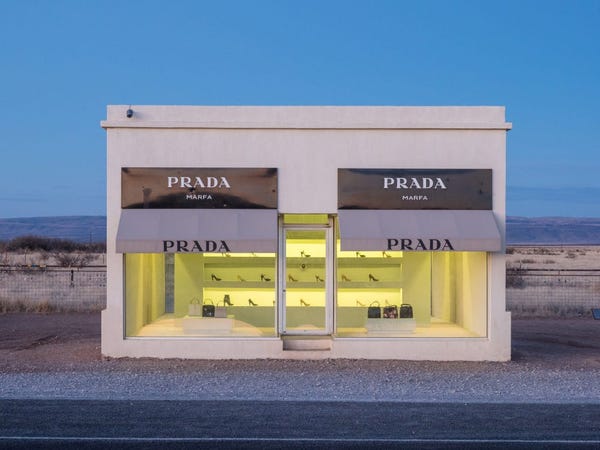 Made out of traditional adobe bricks, the sculpture actually mimics the architectural style of Marfa, which is known as a center for minimalist art.

They even enlisted the help of Miuccia Prada herself. She hand-selected $80,000 worth of merchandise from Prada's 2005 fall shoe and bag collection. 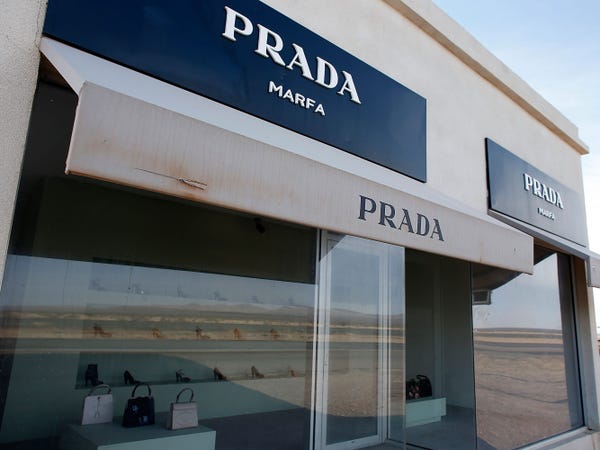 Miuccia Prada, the co-chief executive and co-creative director of Prada, was consulted on the exhibit. Her merchandise choices were displayed in the window front, even though the doors would always remain locked.

The interior design, including the wall color, lighting, and carpet, were all sampled from Prada's own retail stores in Milan.

On October 1, 2005, Prada Marfa officially opened, but the artists had no intention of maintaining it and knew it would eventually decay. 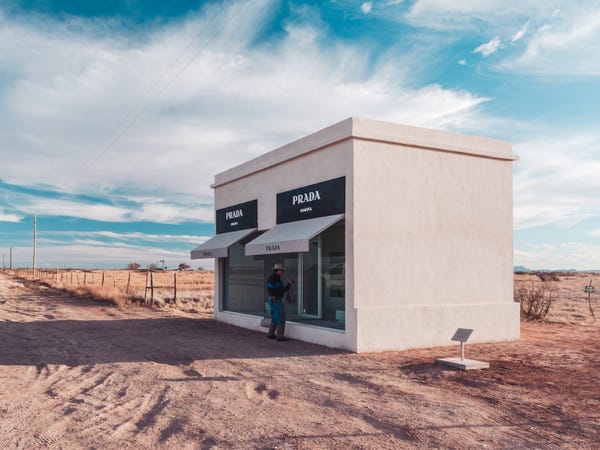 In an interview with The New York Times, Villareal said, "If someone spray-paints graffiti or a cowboy decides to use it as target practice or maybe a mouse or a muskrat makes a home in it, 50 years from now it will be a ruin that is a reflection of the time it was made."

Within days of opening, Prada Marfa was broken into, vandalized with graffiti, and looted. 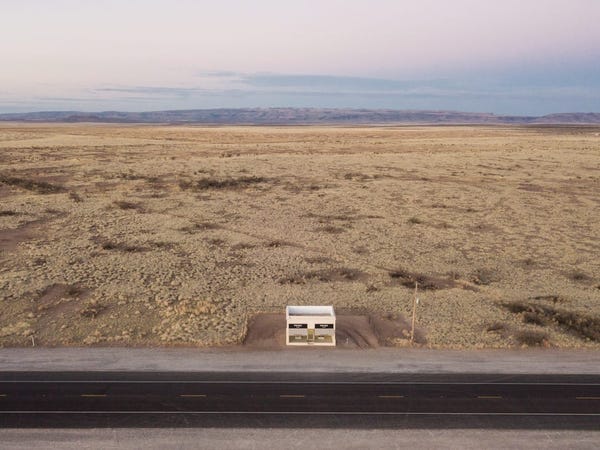 Despite their original intent of leaving Prada Marfa at the hands of Mother Nature, the artists decided to return and install security measures to deter further vandalism.

Elmgreen and Dragset repaired the building and installed measures they hoped would deter looters, such as changing all the shoes to be right-footed. 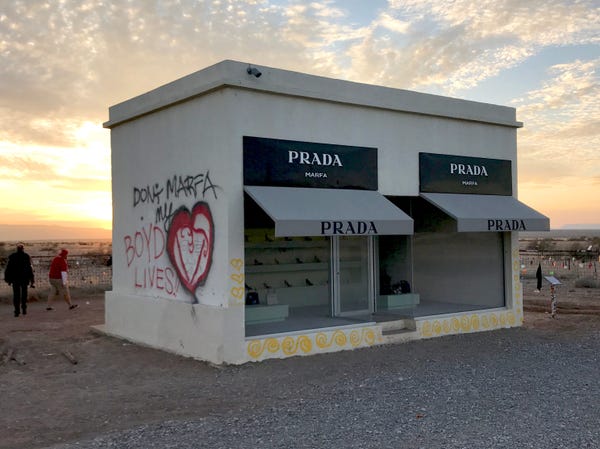 Prada bags were given GPS trackers, the bottoms of the bags were cut off, and stronger glass was swapped in.

For years, Prada Marfa remained relatively untouched, save a couple of graffiti tags, until another large vandalism occurred in March 2014. 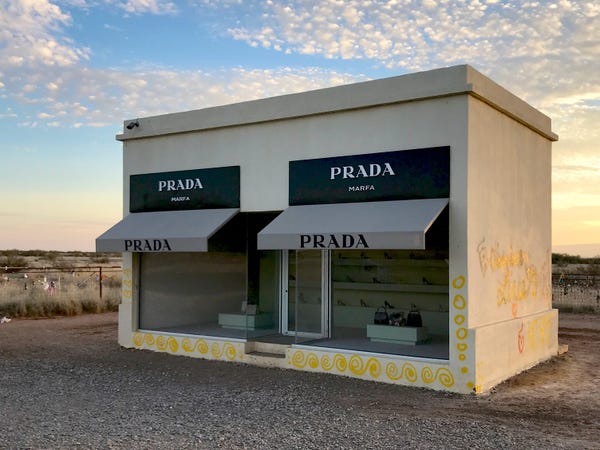 The vandalism left Prada Marfa covered in graffiti and a platitude of TOMS logo signs, attached with strong glue that ruined the storefront's glass.

According to The Observer, "The perpetrators left fliers at the store-shaped sculpture that, in a manifesto of sorts, decried TOMS for recent partnerships with high-end retailers, the kind that might also sell Prada."

Elmgreen and Dragset said, "Our plan was to let nature gradually decide the destiny of the piece and not random vandals." 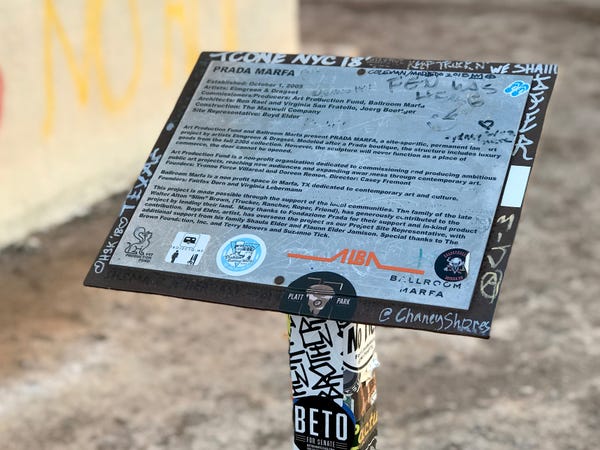 After the vandalism, Prada Marfa ran into yet another roadblock when the Texas Department of Transportation classified Prada Marfa as an illegal roadside advertising. In order to mediate the setback, the nonprofit that worked with the artists, The Art Production Fund, agreed to donate Prada Marfa as a "civic gift" to the public.

Despite the setbacks, Prada Marfa remains an iconic roadside attraction and a symbol of artists surrendering their control. 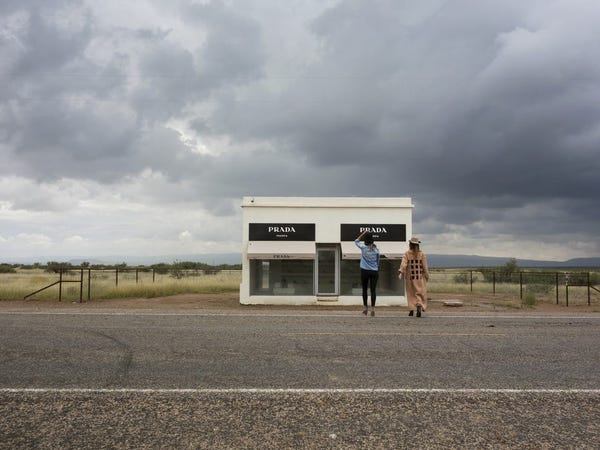 Celebrities, such as Beyonce, have even paid a visit to the lonely Prada store.

"It has turned into something beyond our control," Elmgreen and Dragset told Vogue. "And that is the best thing an artist can experience. As artists we are only here in order to trigger a debate, to provide platforms for other people's interpretations."