A woman who was mercilessly tormented by online trolls has revealed how two years of incessant bullying led to her self harming, and attempting to take her own life.

Lia Stubbings, 24, from Buckinghamshire, found herself the target of online trolls, who would set up Facebook groups solely dedicated to mocking her, after appearing in a TV advert aged 16.

Now, speaking out the dark period in her life, Lia praised Little Mix star Jesy Nelson, who recently spoke out about cyber bullying in the BBC documentary Jesy Nelson: Odd One Out, and hopes to make trolls realise the consequences of their hurtful words.

Lia, who does not wish to publicly share the advert she was in, said: ‘I haven’t quite brought myself to watch Jesy’s full documentary yet, but I saw the trailer, and it really hit me. 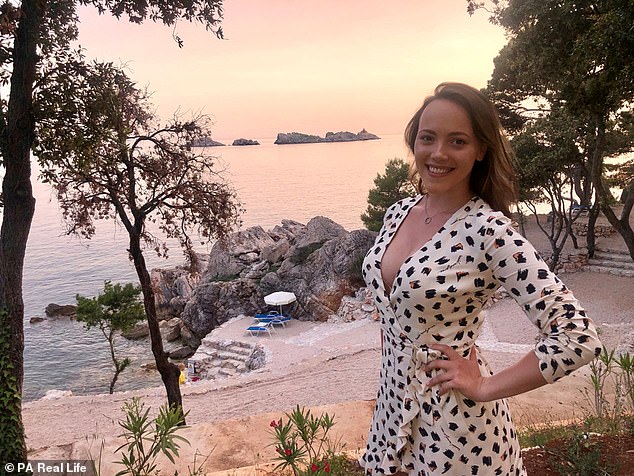 Lia Stubbings, 24, from Buckinghamshire, found herself the target of cruel trolls after appearing in a TV advert aged 16 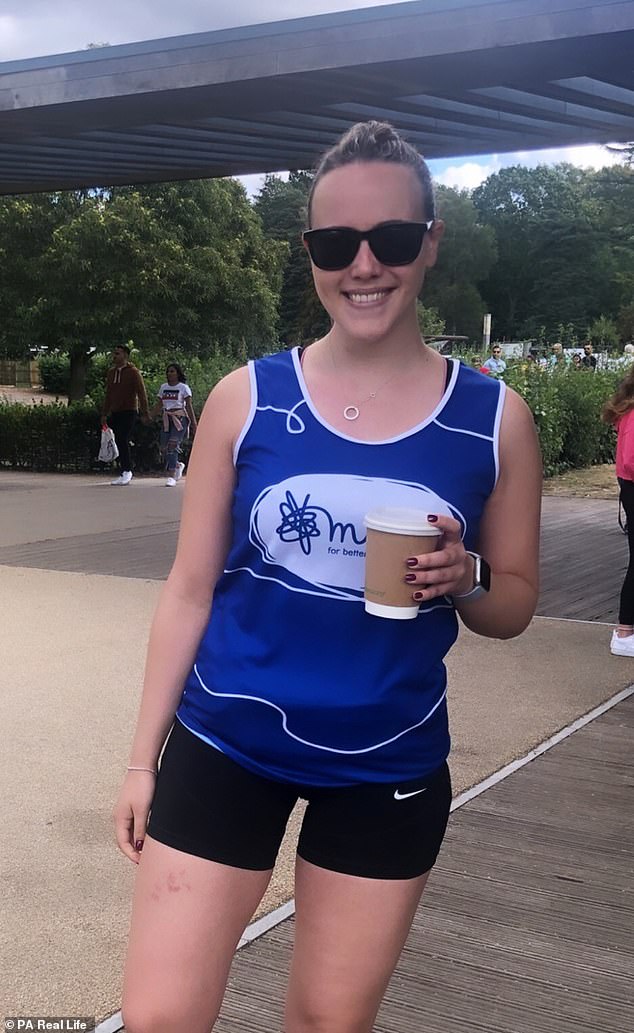 Lia found herself the target of cruel trolls, who would set up Facebook groups solely dedicated to mocking her and send her comments about her appearance 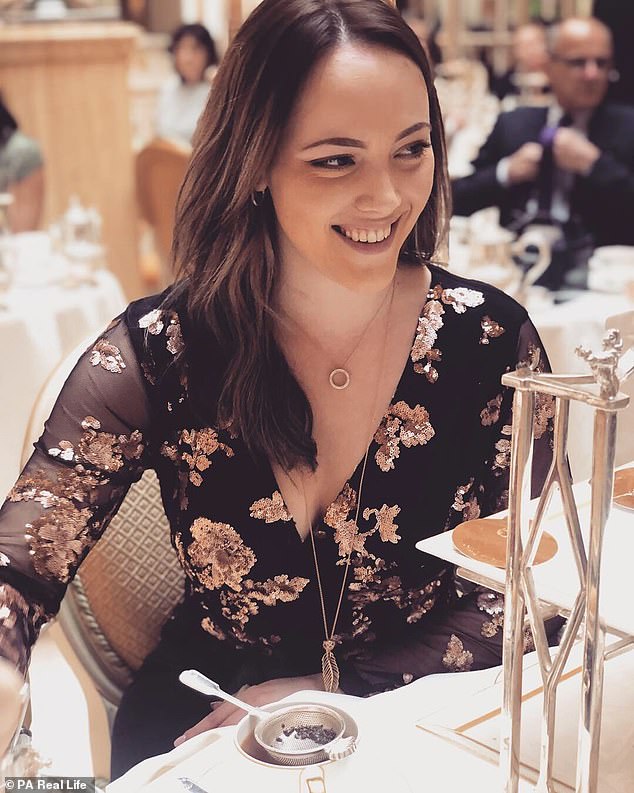 Lia found her life change when she landed a role in a TV advert – which, in turn, seemed to attract some negative attention from other schoolchildren

‘She has been so brave to share her story. What she went through was on such a huge scale, and it is so admirable that she’s leading the way for other people to open up and share their own stories.

‘Trolls need to realise that people’s lives aren’t fair game, and their words do hurt. They can type out a nasty message then close their computers down and go to sleep – but there is someone on the other end who has to read that.’

Growing up, Lia, who now works in digital marketing, did not encounter problems with bullying.

But, all that changed when, at the age of 16 when she landed a role in a TV advert – which, in turn, seemed to attract some negative attention from other schoolchildren.

She explained: ‘I’d gone along to do the TV advert as an extra, but ended up being featured quite prominently. I have no idea why, but some other schoolchildren really took against it.

‘No-one ever said anything to my face – save for the usual laughing and whispering when I walked into a room – but online, it was ruthless.’

With the majority of comments focusing on her appearance, Lia’s confidence was soon in shreds.

Over the course of around a year, the bullying intensified – before stopping, as suddenly as it started.

She explained: ‘I would see all these Facebook groups about me that people would join, or find comments about me either on my own photos, or someone else’s.

‘Sometimes, I’d think it had stopped – then I’d come across another nasty comment. I wouldn’t even know how to begin to understand why trolls do these things. 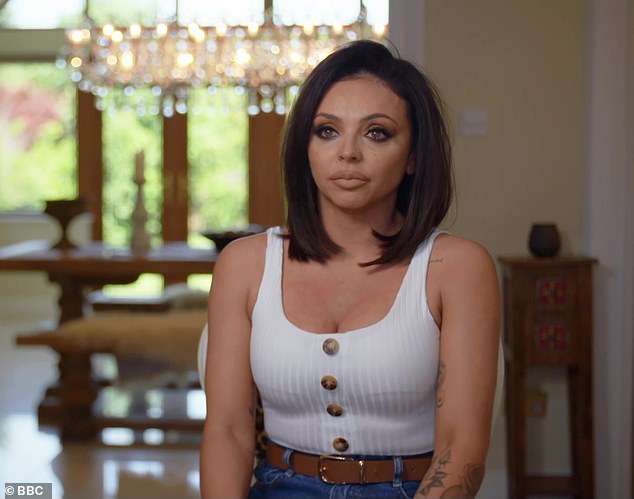 Speaking in the BBC documentary Jesy Nelson: Odd One Out, the Little Mix star described the devastating impact of ruthless trolling 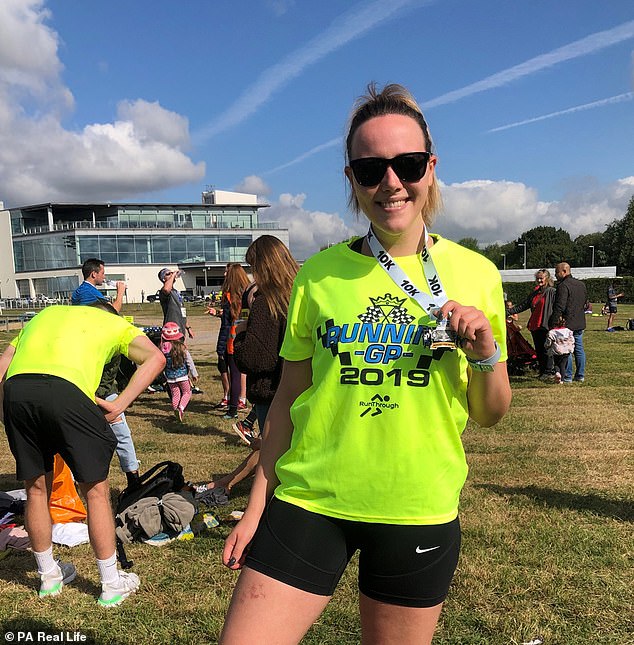 ‘Perhaps they are jealous, perhaps it makes them feel big to make someone else feel small. But in my mind, they are cowards. To sit and be horrible to people when you’re hiding behind a computer screen is an utterly gutless thing to do.’

Though she does not believe she realised it at the time, looking back, Lia now knows that she eventually began to suffer with depression.

Terrified speaking up would make the bullying worse or that or that nobody would be able to help her, she suffered in silence and turned to self-harm.

She said: ‘I needed an outlet. To me, the physical pain helped distract from the emotional.’

Lia’s story draws haunting parallels with Jesy’s who after shooting to fame on the X Factor, which she won along with her band, Little Mix, in 2011, said she became ‘obsessed’ with reading negative comments about herself.

Speaking in the BBC documentary, the 28-year-old starlet told how she would starve herself before TV performances and video shoots, and later binge eat. 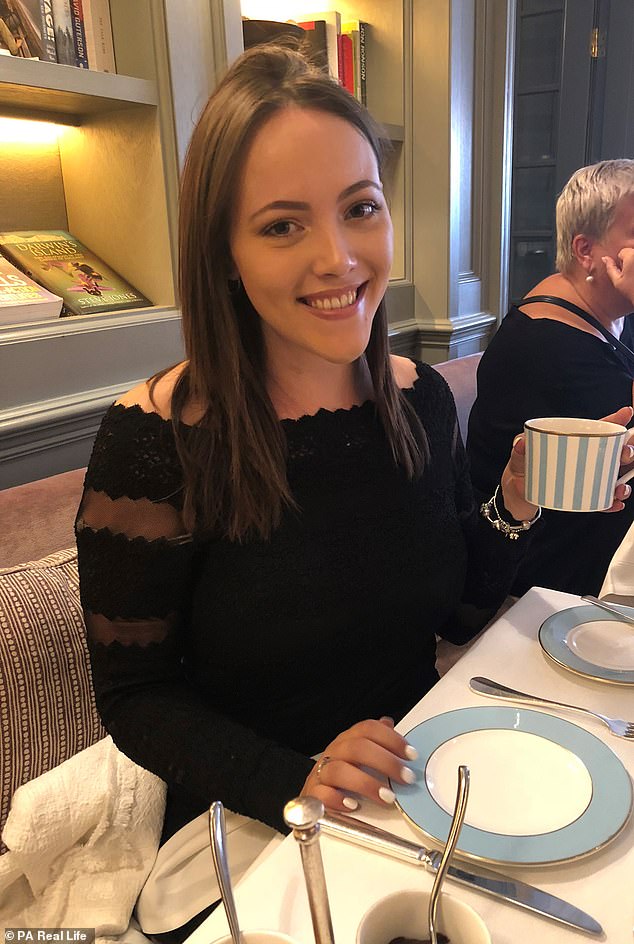 Then, in 2013, following two years of ruthless trolling, Jesy hit rock bottom, and tried to take her own life.

By opening up about her experiences in the BBC documentary, she says she now wants to ‘make a change and a difference to other people’s lives’.

In Lia’s case, although the trolls stopped after around a year, the emotional impact they left behind was long-lasting.

She said: ‘I don’t know why they stopped. Maybe they got bored, maybe they had an epiphany that what they were doing was actually really nasty.

‘But though I wasn’t seeing their words anymore, the repercussions with my mental health went on and on.

‘Slowly, I tried to rebuild my motivation and work hard – something I’d always done before – and eventually got to university.

‘When I was there though, I also started to develop anxiety, perhaps because there had been so much change and I was away from home for the first time. 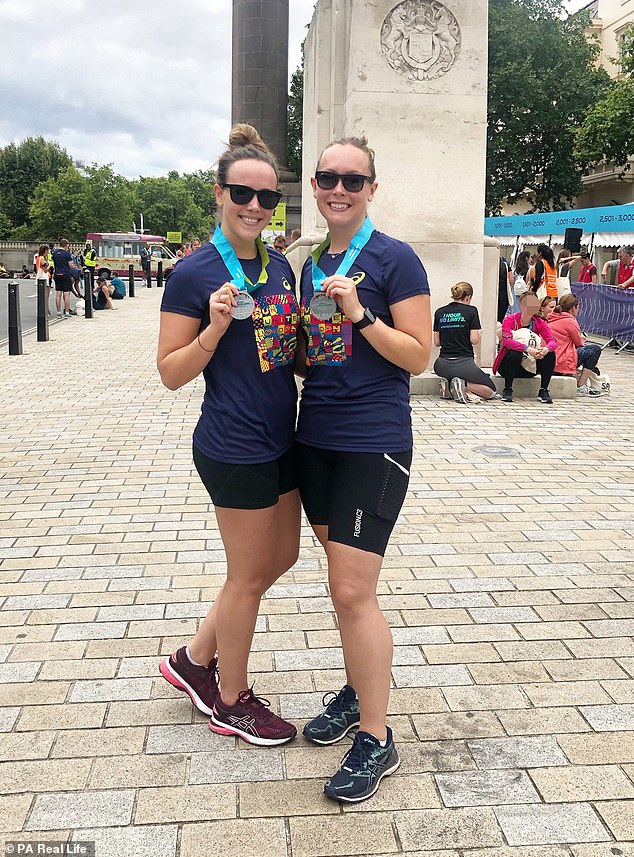 Lia (left) came off her anti-depressants last year and is now having therapy to help her cope with the impact that online trolling had on her. Pictured: Lia and her sister Amber after they completed a 10K run 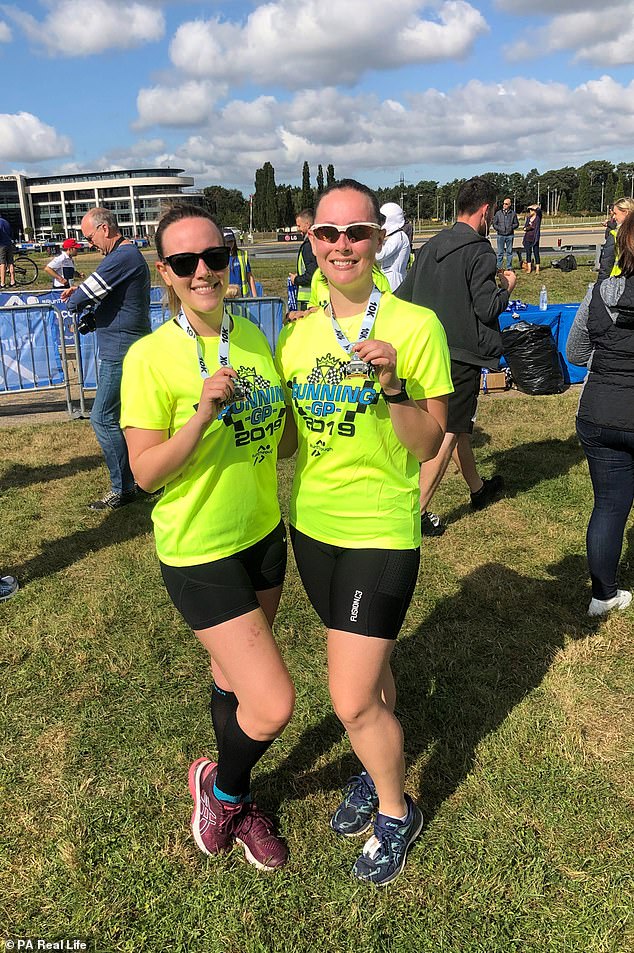 Lia, picutred with her sister Amber after completing a 10K run, admitted that talking to a therapist about all she’s been through is helping her

‘It took me a long time to understand it, but now I look back, I can see the depression has always been there lurking, since I was 16.’

Last year, Lia began taking anti-depressants, but has since come off them as she did not like some of the side effects.

‘They did really help to put a gap between me and my emotions, though, and gave me that space to take a step back,’ she said.

She is now having therapy, and said that talking to an outsider about all she has been through is helping.

Her ordeal has also made her incredibly passionate about mental health, and in a bid to show support for mental health awareness she will be taking part in London’s Royal Parks Half Marathon for the charity Mind on Sunday 13 October. 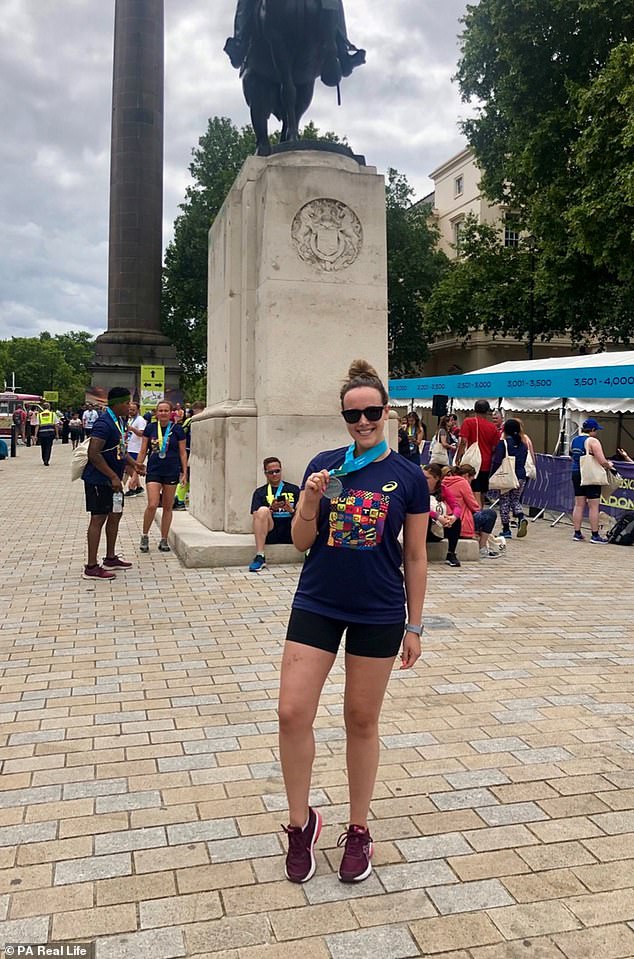 She continued: ‘I decided to sign up and do it, as I’d watched it as a spectator and there’s always such a great atmosphere.

‘I wanted to do it to raise money for charity, but wanted to pick a cause I had a connection with. Then, I saw Mind had places, and it seemed perfect.

‘There will be so many emotions when I cross that finish line.’

Feeling stronger every day, Lia is now determined to help others, and hopes that by sharing her story, just like Jesy did, she will show others out there struggling with bullying that they are not alone.

She added: ‘My depression and anxiety still have their moments, but now, I feel I can survive anything – and I’m only getting stronger. 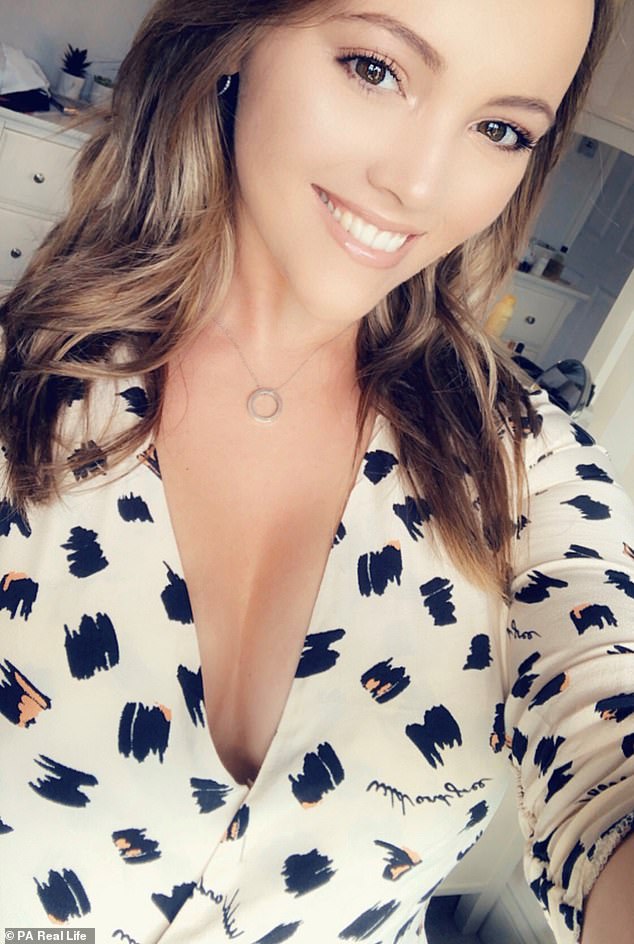 Lia said that she is determined to help others, and hopes that by sharing her story she will show others out there struggling with bullying that they are not alone

‘I want to follow in Jesy’s footsteps and share my own story to firstly show trolls the very real impact behind their words.

‘But I also want to show others out there struggling like I did that help is possible, and that they aren’t alone. If I can help just one person, I’ll be happy.’

Karen Bolton, Head of Community and Events Fundraising at Mind said: ‘We’d like to say a big thank you to Lia for all of the hard work she’s put into her training and fundraising – especially after everything that she’s been through.

‘The money she’s raising through taking part in the Royal Parks Half will help us to continue to make sure that no one has to face a mental health problem alone.’

The money raised by Lia will help Mind to provide information and advice to the one in four of us who will experience a mental health problem each year.

If you’ve been inspired by Lia’s story you can sign up to run for Team Mind at www.mind.org.uk/run-for-mind