Netflix's You is back for more obsession, deception and bad-boyfriend violence – one-stop shopping for all your triggering needs. Or perhaps it premiered on the day after Christmas to act as an antidote to all that holiday malarkey that viewers have gorged on for the past month or two. It's a cleanse, only with poison. 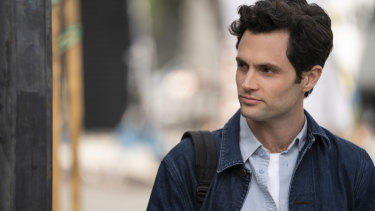 Is he adorable or creepy? Is he handsome or heinous? Penn Badgley returns as Joe in You. Credit:Tyler Golden/Netflix

The new season is a lukewarm extension of the first – redundant and not as engrossing as it used to be. Penn Badgley returns as Joe, the stalker-murderer bookstore manager with sad eyes and a ceaselessly cynical interior monologue. Is he adorable or creepy? Is he handsome or heinous? Are his impulses merely a reflection of the cruelty of those around him? Is he the man of your dreams or the guy who uses a meat-grinder to get rid of his latest victim?

Can he be all of these? That's how You wants it.

Faced with an inconvenient body count in season 1 that included his unlucky girlfriend Guinevere Beck (Elizabeth Lail), and startled by the sudden reappearance of his shoulda-been-dead ex-girlfriend Candace (Ambyr Childers), Joe has fled New York to hide in the most unsavoury place he can think of: Los Angeles.

There, amid the fakers, Instagram influencers and an unsettling Chris D'Elia cameo, Joe's voice-overs bring us up to date on his new life and identity as Will Bettelheim. In short order, Will accumulates many of the trappings he had as Joe: a bachelor apartment that comes with a smart, meddling teenage girl (Jenna Ortega) who lives downstairs; a job managing the books section of a high-end natural food emporium. 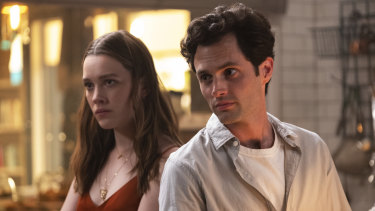 And although he has sworn off love ("Love, this is why you're not for me," he reminds himself), Will immediately grows infatuated with a co-worker (Victoria Pedretti), whose name, in fact, is Love.

Her name is Love? Yes. It's part of You's campier nature to be a little too on-the-nose, including its metric tonne of obvious references to LA's foodie scene, landmarks and the works of Joan Didion. Remember, the show's actual ex is the US cable network Lifetime, which first aired the series to much critical acclaim but a disappointing amount of buzz; months later it became a Netflix hit.

Although Joe/Will tries to narrate his growing attraction to Love as a cute coincidence – a second chance at redemptive romance – viewers will already be one step ahead of him. (If not, be warned there are some teensy-weensy spoilers ahead.) The relationship, we are not surprised to discover, has been reverse-engineered by Joe/Will's sick compulsion. He's even rented an extra-large storage unit to install another one of his nifty, thick-plexiglass prison cells, just like he had back in New York, to house those who impede his happiness.

As with dopey Guinevere (Lail makes a few obligatory appearances as her ghost), dopey Love is too self-centred to notice that her sensitive, tousle-haired boyfriend is too good to be true. She has her own problems: a dead husband, a bevy of judgey friends (a.k.a. potential murder victims) and a co-dependent relationship with her petulant and emotionally needy twin brother (James Scully). All of which ought to be enough to encourage Joe/Will to find a less complicated woman to stalk.

About three episodes in, the viewers, too, should start asking themselves whether they're getting as much out of this relationship as they're putting in. While we do learn a little more about why Joe/Will is the way he is (lots of flashbacks to his unhappy childhood and big-time mummy-abandonment issues), the tangential scrapes and schemes he experiences as the puppet master (including his do-good impulse to help catch a sexual predator) start to wear thin, almost comically so.

Badgley, who gave a fine and even complex performance in season 1, is less inspired on this go-round, and his co-stars seem to have been told they're starring in a satire of the original show. In fact, that may be the best, twistiest way to end You – with everyone laughing at the big prank they've cleverly pulled on Joe, or Will, or whatever he's called.