A woman whose OCD is so severe she wore up to three pairs of gloves at once every day for eight years is desperate to beat her condition, after it cost her the love of her life.

Ellen Hardy, 26, of Sowerby Bridge, West Yorks, is so paranoid about germs that she layers up her clothing – even when it’s hot – and washes her hands 100 times a day.

Her obsessive behaviour caused her boyfriend to leave her, as they couldn’t kiss without her insisting he washed out his mouth beforehand and she’d run to the bathroom to wash her face if he touched it.

Eager to win him back, Ellen, who cannot work because of her condition, is crowdfunding to raise £10,000 to afford a stay at a specialist £900-a-night obsessive compulsive disorder clinic to overcome her condition. 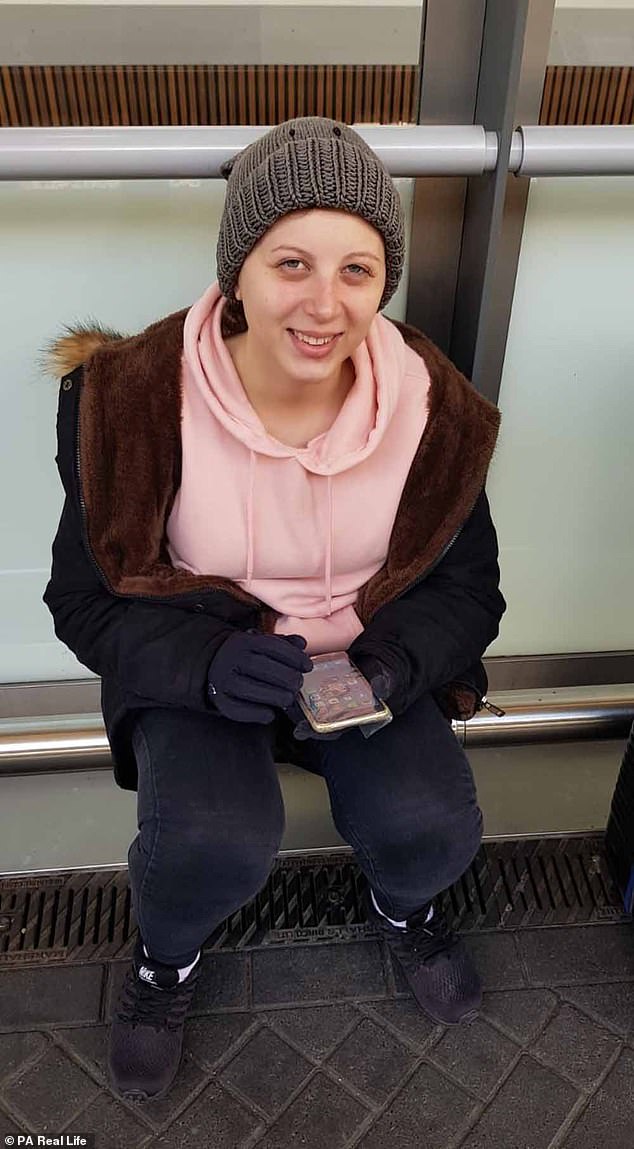 Ellen Hardy, 26, of Sowerby Bridge, West Yorks, is so paranoid about germs that she layers up her clothing – even when it’s hot – and washes her hands 100 times a day

After identical twins Ellen and Robyn were born just two minutes apart, they mirrored each other’s behaviour – even taking the same GCSEs, A levels and degree.

But in the second year of studying games design at the University of Cumbria, while Robyn, 26, continued to thrive, Ellen’s happiness was thwarted by an insidious obsession with cleanliness, which has led to her accumulating over 200 pairs of gloves – some of which she wore every day for eight years.

She was diagnosed with OCD – a common mental health condition causing obsessive thoughts and compulsive behaviours – in August 2016.

Ellen said: ‘My problems started when I moved into second year student digs and became obsessed with avoiding germs.

‘It was your typical student let. A bit rough around the edges, it felt like it hadn’t been lived in for a few years. 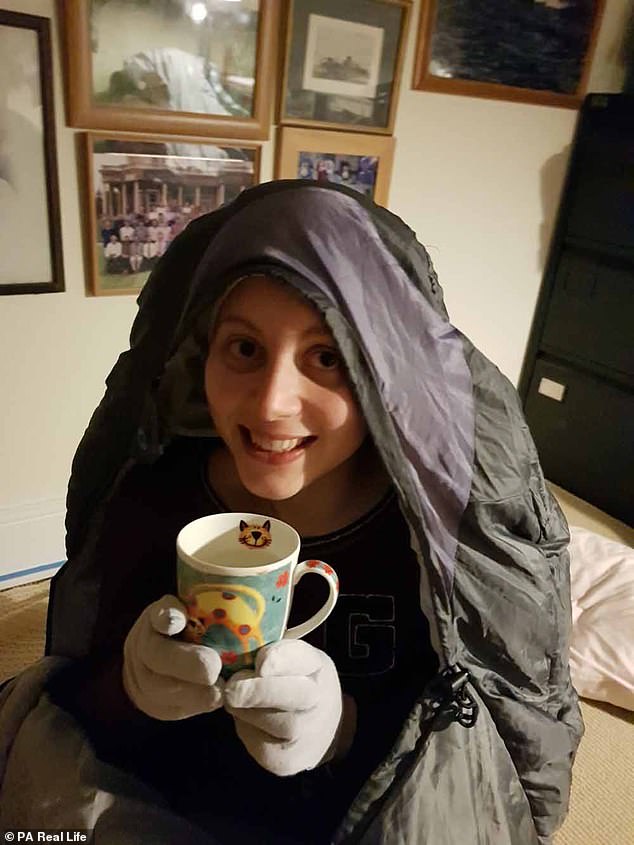 ‘I knew that was part of the student deal though and I never thought it would lead to any problems.

‘I started wearing gloves at night to moisturise my hands, but soon realised that by building a barrier between myself and everything else, I was avoiding coming into contact with germs.

‘I instantly felt better and before I knew it was wearing three pairs of gloves at once – every day.’

Calling herself a ‘germaphobe’, Ellen says it is difficult to pinpoint exactly when her OCD tendencies developed, only that they started after the move and gradually became worse – although her twin showed no signs of the condition.

‘It was a very gradual thing, so it’s hard to say exactly what triggered my OCD,’ she said. ‘I can’t say it’s one particular thing or day, it just slowly happened.’ 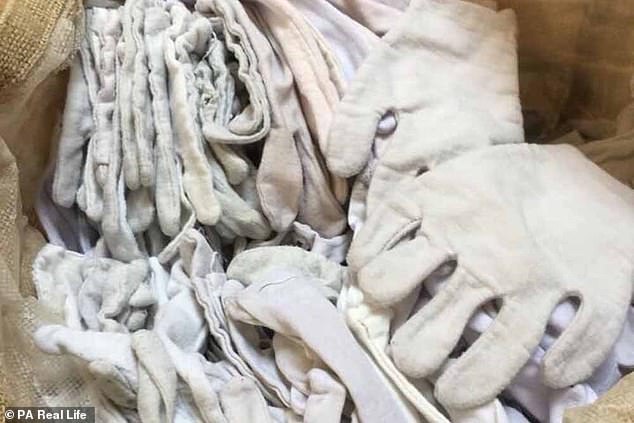 At first she just used her sleeve to open doors or when changing the TV channel using the remote.

But in January 2013, after using moisturising night gloves to treat her Raynaud’s disease, a condition affecting blood circulation in the extremities, Ellen soon became fixated with wearing the protective garments around the clock.

‘I instantly found myself feeling better and, as the months went by, I started having different gloves for different occasions,’ she explained.

‘I’d have ones for outside, ones for in bed – I even had specific vinyl ones that I’d use when taking out the bins.’

By the end of the academic year, Ellen’s OCD had changed up another gear. 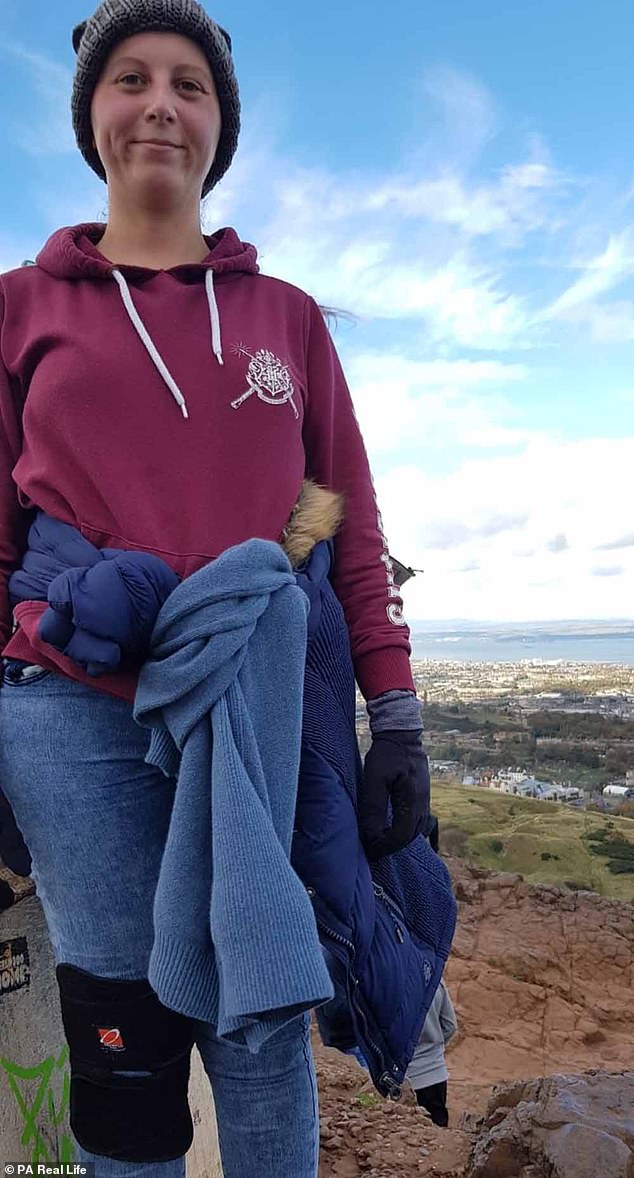 Calling herself a ‘germaphobe’, Ellen says it is difficult to pinpoint exactly when her OCD tendencies developed, only that they started after the move and gradually became worse – although her twin showed no signs of the condition

She continued: ‘I started to put my phone in a plastic bag, because I didn’t like anyone touching it or it touching other surfaces.

‘Then I started wearing hoodies and hats to keep my head and hair covered and always wore long sleeved tops and trousers, so that every part of my body was covered.

‘I know it’s not rational, but I simply don’t want anything getting in.’

Sitting through lectures wrapped up in gloves and hats, even during the sweltering summer months, Ellen would go to any lengths to protect herself from germs.

‘Out and about, complete strangers would ask me why I was wearing so many layers and I never knew what to say,’ she confessed.

‘Mental health is very personal. It’s not something you share with strangers in the street.’ 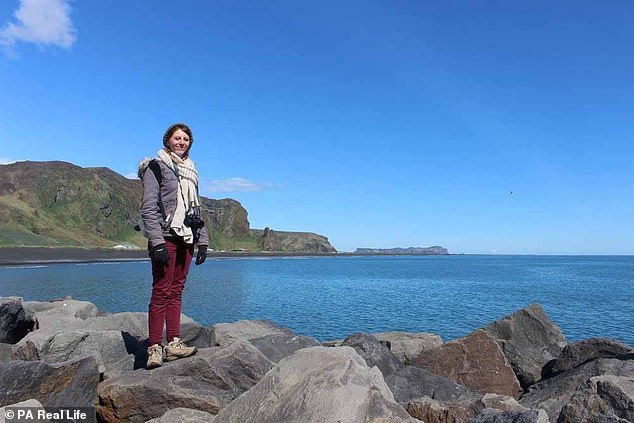 Referred for a course of CBT, a talking therapy that helps manage problems by changing the way you think and behave, sadly, Ellen found the treatment made her OCD worse – not better

Friends and family soon noticed Ellen’s odd behaviour, especially after she started covering herself from top to toe in a ‘protective layer’ of clothing.

And in 2014, after graduating from university, her OCD even started causing problems with her loved ones.

‘Some people couldn’t understand why I didn’t just stop and snap out of it,’ she said.

‘But you can’t expect a depressed person to just “snap out” of their depression, it’s the same with OCD.

‘It was particularly hard with my sister, she couldn’t understand how I’d changed so much in just a few years.

‘At times, it was too much for her – which I understand – but it was hard for me too. I always wished I could just be like her. 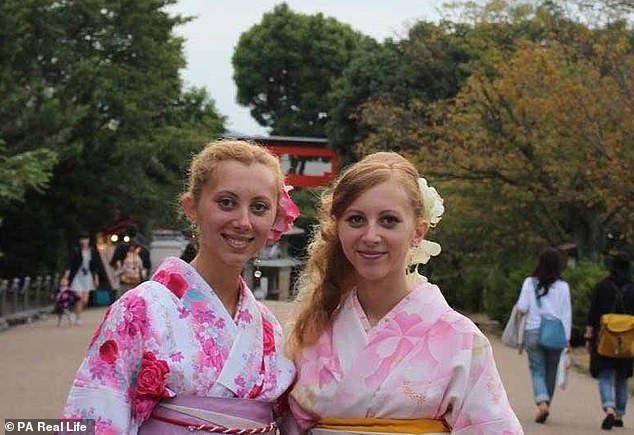 Ellen, pictured with her twin sister Robyn prior to when her OCD took hold, is now crowdfunding to raise £10,000 for treatment

‘It was like seeing a version of myself that didn’t have the crippling OCD.’

Desperate to ease tensions with her family and return to her old self, Ellen booked an appointment with her GP in August 2016 and was diagnosed with severe OCD.

‘I told him about my behaviour and how I was feeling and he told me there and then what it was,’ she said.

Referred for a course of CBT, a talking therapy that helps manage problems by changing the way you think and behave, sadly, Ellen found the treatment made her OCD worse – not better.

‘I went to four or five sessions and a key part of that was identifying all the obsessive traits and behaviours that I had,’ she explained.

‘But being made aware of how many times I would wash my hands in one sitting made me even more obsessed with making sure I stuck to those patterns.’ 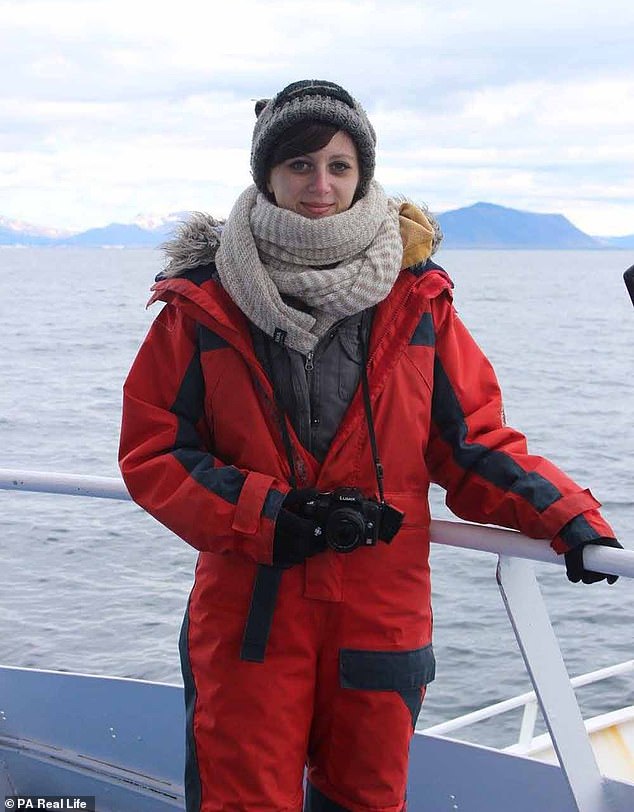 Ellen’s obsessive behaviour caused her boyfriend to leave her, as they couldn’t kiss without her insisting he washed out his mouth beforehand and she’d run to the bathroom to wash her face if he touched it. Pictured: Ellen on holisday

Despite her condition, which involves compulsively washing her hands over 100 times a day, Ellen found romance after meeting someone online.

‘We were able to enjoy a relatively normal relationship despite my OCD,’ she said.

‘Luckily, he was completely understanding and supportive.’

But Ellen admits that if they were being intimate, she would insist her boyfriend, who she does not want to name, washed ‘most of his body’ first.

Then, in July this year, she was dealt a devastating blow when he called things off, saying it was because of her OCD, which had stopped them being able to enjoy things that ‘other couples do’.

She said: ‘We were talking about getting our own place together and as a result all my obsessions became heightened – my OCD was in full swing and he couldn’t deal with it anymore.

‘He told me he wanted us to be a normal couple, he wanted to be able to touch me without me running off to the bathroom to wash my face, or to be able give me a kiss without me insisting he wash his mouth first. 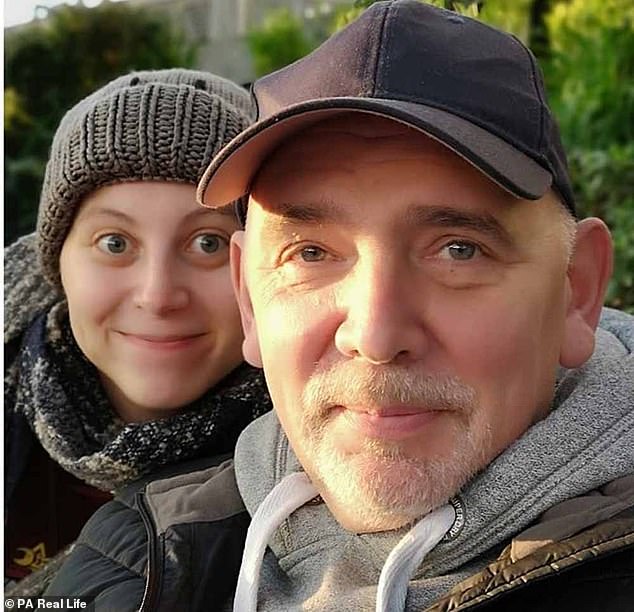 Buoyed by her daughter’s step in the right direction, Ellen’s mum started looking for special treatment centres to help her overcome her OCD once and for all. Pictured: Ellen with her dad

‘It all just built up over time, it didn’t help seeing other friends in regular relationships either – it just reminded him of all the things we didn’t have.’

Realising just how big a wedge her condition was driving between her and the people she was closest to, in July this year Ellen finally took off her gloves and has not put them back on since.

‘It hasn’t been easy, as my hands have become so sensitive after eight years of using gloves day in day out that I’m having to relearn how to touch and how things feel,’ she said.

Buoyed by her daughter’s step in the right direction, her mum started looking for special treatment centres to help her overcome her OCD once and for all.

After scouring the internet, she found a private well-being clinic specialising in OCD treatment, but at a staggering £900 a night, and an advised week-long minimum stay, Ellen and her family are in no position to foot the bill, so have turned to crowdfunding for help. 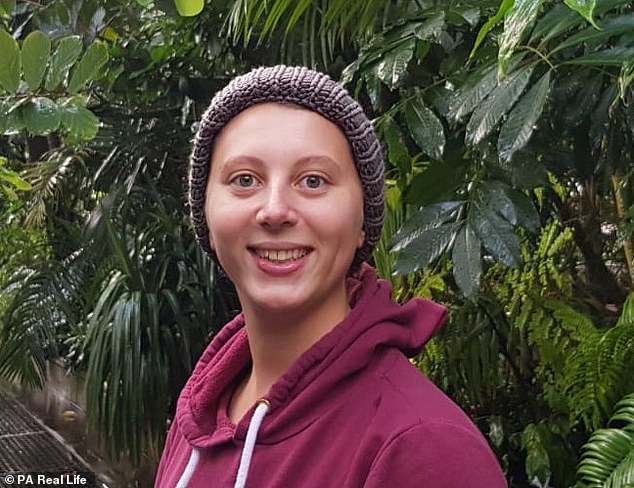 Still having a break from her boyfriend, Ellen hopes that sharing her story will raise awareness about OCD

Explaining how she thinks the clinic will succeed, where CBT failed, Ellen said: ‘The clinic Mum has found is tailored specifically towards OCD instead of being a blanket treatment for mental health problems.

‘These past five weeks have been tough, I still have to use my sleeve to pick things up and I have to wash my hands at least 20 times in each sitting, but I’m determined not to regress.

‘I’ve lost the love of my life because of this condition and I’m determined to win him back.’

Still having a break from her boyfriend, Ellen hopes that sharing her story will raise awareness about OCD.

‘I just want people to understand that OCD isn’t something you choose, I don’t want to be like this,’ she said.

‘People stop and stare in the street and I just want to tell them, “I don’t enjoy being like this”.’