The Duke and Duchess of Cambridge have taken control of two companies which were formed to protect their ‘brand’ and intellectual property rights.

Prince William and Kate, both 38, became the registered persons with significant control and therefore the beneficial owners this week of the limited companies called APL Anglesey and CE Strathearn, which were set up in 2012 and 2013, respectively.

The firms, set up in each of their names, enable the couple to sell officially-endorsed products and take action against anyone selling items that could harm their image.

Previously the shareholders were trusted royal aides who represented the interests of the couple and this is the first time that Prince William and Kate have been registered as owners of businesses with a potential commercial role. 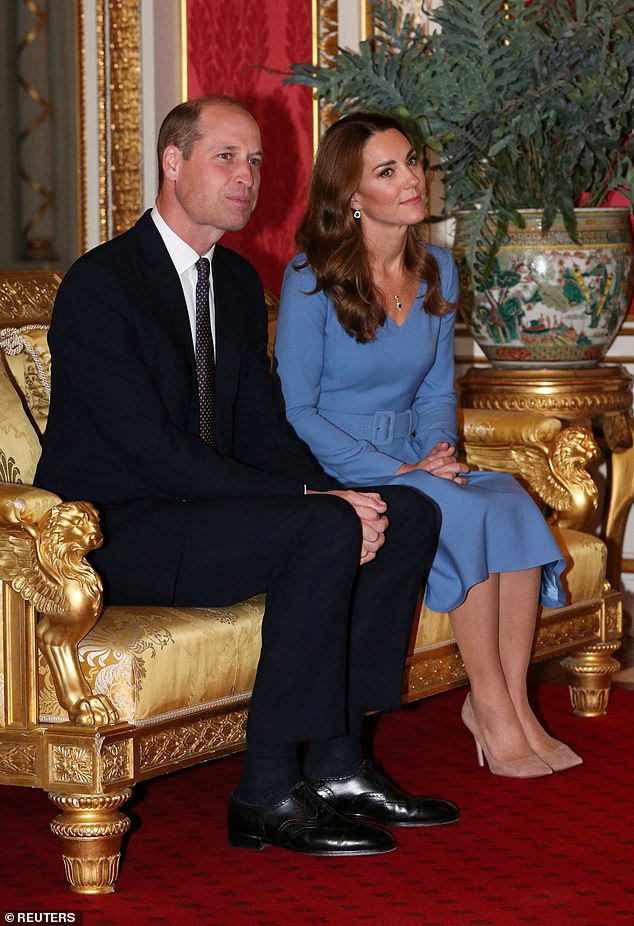 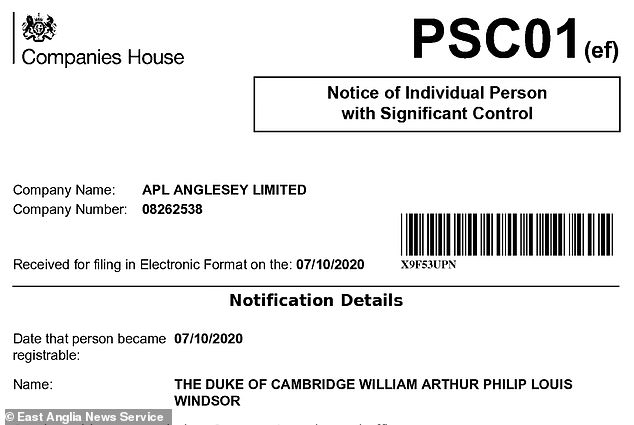 Prince William and Kate, both 38, became the formal owners this week of the limited companies called APL Anglesey (above, the paperwork showing this) and CE Strathearn, which were set up in 2012 and 2013, respectively 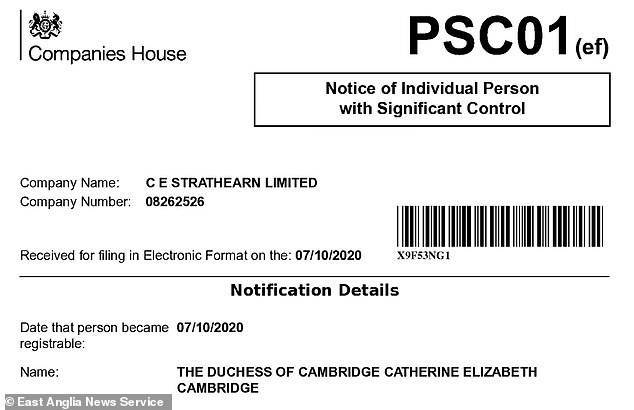 The firms, set up in each of their names, enable the couple to sell officially-endorsed products and take action against anyone selling items that could harm their image. Pictured, the notice showing Kate taking ownership of her company

The companies have never traded and have always filed dormant company accounts, although their existence means they could be called upon to carry out work for them in the future.

The move reflects speculation that William is gradually growing into his role as a future monarch and exerting greater hands-on control over his financial and personal affairs.

It follows a move in August last year when Prince William and Kate were registered as persons with significant control in the company behind their charity, the Royal Foundation of the Duke and Duchess of Cambridge.

Companies House records – which were updated today – do not specify if the couple are shareholders of APL Anglesey or CE Stathearn, but specify that they each have ‘significant influence or control’ over their respective companies.

APL Anglesey was set up to represent Prince William’s interests in October 2012, taking its title from the initials of his middle names Arthur Philip Louis and the Welsh island where he and Kate lived after they were married.

Kate’s company CE Strathearn was formed in November 2013, using the initials of her names Catherine Elizabeth and her Scottish title of Countess of Strathearn, awarded by the Queen. 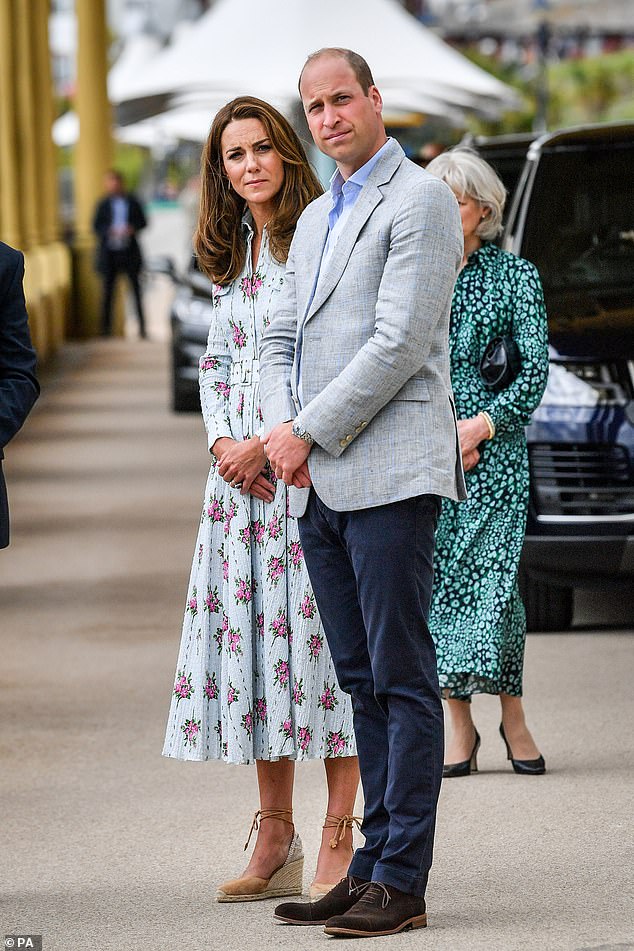 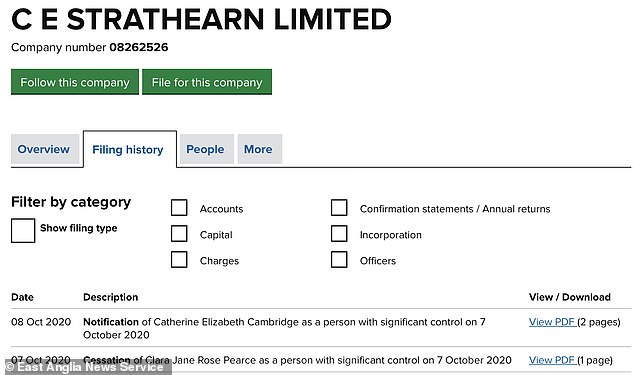 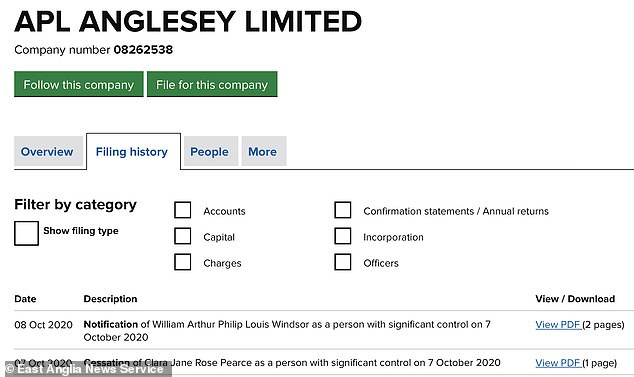 The formation of the companies made headlines at the time with commentators suggesting that it was a move more often associated with celebrities such as David and Victoria Beckham.

Paperwork was filed at Companies House this week confirming that Clara Pearce, the assistant treasurer to Prince Charles and the Duchess of Cornwall, had stepped down from her role as shareholder at both companies.

THE OFFICIAL GUIDE TO ROYAL MERCHANDISE

Royals including the Queen and Prince Charles already have their own official ranges of merchandise.

The profits from the prince’s range, Highgrove, go to charity while Buckingham Palace’s funds the Royal Collection, art and antiques held in trust on behalf of the nation.

The latest edition to the official royal merchandise are souvenirs to mark Prince Beatrice’s wedding to Edoardo Mapelli Mozzi.

The items – which includes a £40 tankard featuring a bee icon – are available from the Royal Collection Trust’s website and the charity said they have been released to ‘celebrate’ the couple’s special day.

The couple enjoyed a private ceremony at the Royal Chapel of All Saints at Royal Lodge, Windsor on July 17.

New documents were later filed confirming that Prince William and Kate had both become ‘an individual person with significant control’ of their own respective companies on Wednesday this week.

The paperwork named Prince William as being The Duke of Cambridge, William Arthur Philip Louis Windsor, as well as recording his nationality as British and saying that his country or state of usual residence was England.

Similar details were registered for Kate with her company, naming her as The Duchess of Cambridge, Catherine Elizabeth Cambridge.

The couple have not been registered as directors of their companies. Currently, the directors still include Prince William’s former private secretary Simon Case who became the new head of the civil service last month.

Prince Harry also had a dormant company called Tsessebe – the name of an African antelope set up in October 2012.

Companies House records show that Clara Pearce also stepped down as a person with significant control of Tsessebe on Wednesday, but no paperwork has yet been filed to say who currently owns the company.

Prince Harry remains a director of the company behind his and wife Meghan Markle’s charity which was formerly known as Sussex Royal, The Foundation of the Duke and Duchess of Sussex.

The foundation was formed last year after the couple formally split their charity activities away from the Royal Foundation which they previously shared with Prince William and Kate.

The Sussex foundation was put into liquidation in July and its name was changed to the MWX Foundation in August following Prince Harry and Meghan’s split from the Firm. The foundation is listed as being the owner of a separate company called MWX Trading.

Kensington Palace has been approached for comment about the Duke and Duchess of Cambridge’s takeover of their companies.

Royal sources previously described the formation of the companies as a ‘sensible thing’ to protect the couple’s rights, saying the firms would only be used on special occasions and any money raised would go to charity.

A Kensington Palace spokesman previously said: ‘APL Anglesey and CE Strathearn have been set up to house the intellectual property rights of the Duke and Duchess. They were formed a year ago, but remain dormant. They are not intended to be used as a regular trading arm.’