The bus crashed Thursday evening on an icy stretch of Interstate 90 in central Washington. Of the 56 people on board, 47 were taken to hospitals for evaluation or treatment. The university said Friday morning that two remain under medical care for injuries that are not believed to be life threatening.

Athletics Director Jennifer Cohen said in a statement early Friday the band members decided they needed to recover and return home instead of continuing on to Pullman, where the teams were set to play in the Apple Cup. 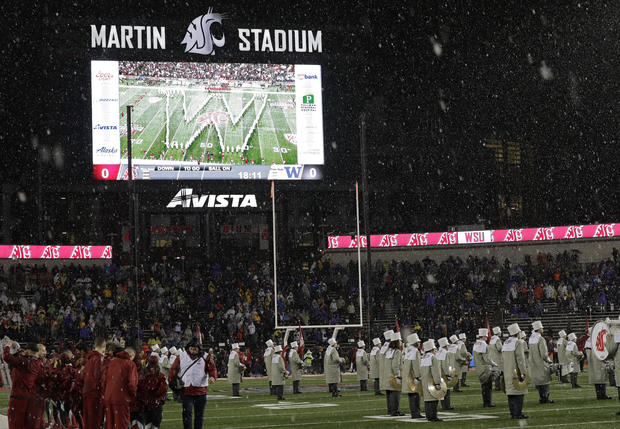 The Washington State marching band is shown in the W formation as they play the Washington fight song in a pre-game tribute to the Washington band, who were unable to perform at the Apple Cup NCAA college football game due to one of their buses crashing Thursday night, Friday, Nov. 23, 2018, in Pullman, Wash.

“I think ‘Bow Down to Washington’ is going to sound really good, so I think it’s going to be a good day today,” Jazmine Edmiston, a Cougars trumpet player, told KIRO-TV.

Cougars athletic band director Troy Bennefield called it a “show of sportsmanship” and said they wanted to “support what those students and staff are going through, because it’s a very traumatic event.”

“No matter what happens in the rivalry, we’re all Washingtonians, and we all care for the well-being of those kids,” said Bennefield. 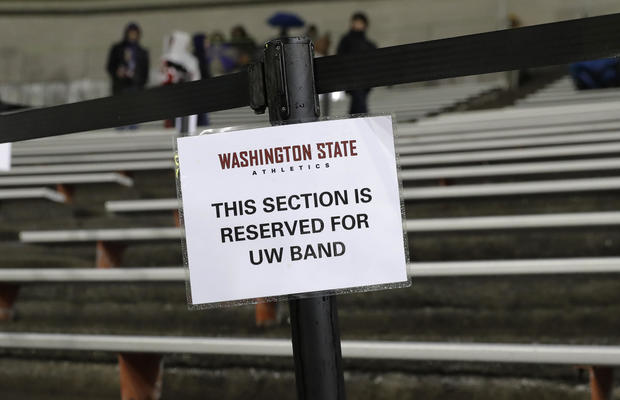 A section of the stands in Martin Stadium remains reserved for members of the Washington marching band before an NCAA college football game against Washington State, Friday, Nov. 23, 2018, in Pullman, Wash., despite statements from Washington officials that the UW band will not be performing Friday after one of the buses carrying band members overturned on Interstate 90 while traveling to the game Thursday night.