Josh Piterman had just wrapped up a gig at Sydney's Australian Club when the call came.

"I screamed like a soprano," he says. Unbeknown to the security guard who ushered him into a room to take the call (phone calls are not allowed in the club), it was Piterman's biggest break of his career.

This week Piterman debuted in a lead role on the West End: the phantom in The Phantom of the Opera, now in its record-breaking 33rd year. 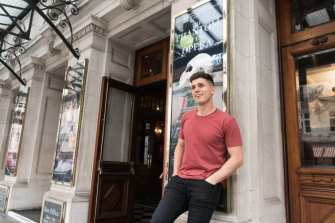 He follows in the footsteps of some music theatre greats including Michael Crawford, who played the original phantom when the show opened at London's Her Majesty's Theatre in 1986.

"I'm immensely grateful for this gift of an opportunity but I also know I've really worked my arse off, especially in this crossover style as a singer," he says.

The 33-year-old, who played the male lead of Gerry Goffin in Beautiful: The Carole King Musical, was a relative latecomer to performing. He was thrust onto stage in year 11 by the school musical director who caught him moonwalking in the cafeteria one lunchtime. Music immediately superseded sports as his new obsession.

I love it when a note soars out of your mouth and … your whole body is taken over by it and you can feel that transfer into the room.

Speaking to The Sydney Morning Herald and The Age at Kettner's Townhouse in Soho an hour before his first full rehearsal in Phantom, Piterman is energised but relaxed.

"Although I started rehearsals a month ago I feel like I've been playing out concepts for this man for 17 years," he says. 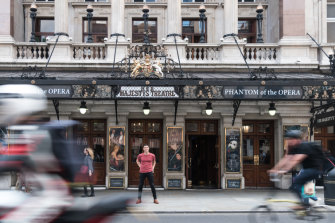 Piterman auditioned in February for Cameron Mackintosh, the theatre behemoth who owns eight venues in the West End and produces some of London's most enduring musicals including Les Mis, Hamilton and Phantom. Piterman was auditioning for either the phantom in Phantom or Javert in Les Mis.

A second callback plus a workshop in London with conductor and musical supervisor Anthony Inglis proved key.

"I remember on the tube on the way home I was writing down every single thing that they'd said and I had a couple of pages of notes and I re-learned the part exactly the way they had taught it to me," he says.

Piterman also drew inspiration from Bryan Cranston. In a popular online video, the Breaking Bad star advises actors to stop auditioning for a role but instead to present the most compelling version of the character.

"And so in that final audition I felt really confident because I wasn't trying to prove anything," says Piterman.

Mackintosh approved Piterman quickly but Andrew Lloyd Webber's office took two more weeks to give the tick, culminating in that night at the Australian Club. Piterman's first call was to his parents, then to girlfriend Lottie, his manager and some friends he could trust to keep the signing confidential.

Piterman wasn't always so composed. In 2013 he left London, where he'd been cast in Hairspray, and returned home tired after a decade of constant performing. He set up a sports business.

"I lost a little bit of sense of why I got in [musical theatre]," he says.

"You spend so much time climbing the ladder and it took me time out to realise, what is the essence of why I do this?"

If he struggled to find an answer then, it is obvious to him now. 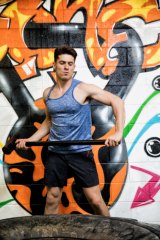 Piterman took a break from musical theatre to focus on his fitness business.

"I love the feeling of when you find that moment in a character that fills you with the emotion that you've been craving," he says.

"I love it when a note soars out of your mouth and kinesthetically your whole body is taken over by it and you can feel that transfer into the room."

Piterman will need that transfer to play the phantom – a deformed, unloved murderer but also a musical genius who craves love –  a world away from the supportive family he enjoyed growing up in in East St Kilda.

"That feeling of when his mask is taken off, it's castrating. It's more than just naked: it's the loss of his manhood.

When it's suggested those very feelings can still be seen as "unmanly", Piterman, who describes himself in his Twitter bio as an advocate for mental health and mindfulness, is the first to agree.

"Society's distorted and screwed, and taught us that men aren't allowed to do that. This is really important. Men don't deal with this stuff, especially Australian men.

"'She'll be right' is one of my least favourite expressions."

Piterman says he's "so happy" to be the person to openly talk about the benefits of meditation. He has a WhatsApp group with performer mates from home who all meditate.

"I know that I won't be everyone's cup of tea, both as a human and an artist … but if you can spend each day being as authentic as you possibly can in yourself, when you go to bed at night you don't have to have those thoughts in your head – 'should I have done that differently' – because at least you go, 'I was me, unashamedly me'."

Josh Piterman stars in The Phantom of the Opera at Her Majesty's Theatre in London until September 5, 2020.