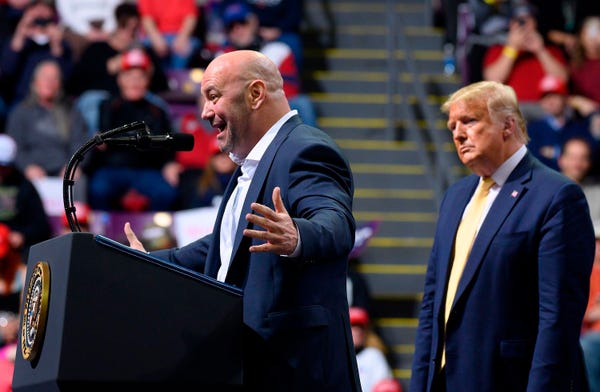 The UFC president Dana White said he doesn't "give a s—" what critics think when he speaks at the Republican National Convention.

White addressed the MMA press after the most recent edition of "Dana White's Contender Series" — a television show designed to funnel talent into the UFC.

The MMA Junkie reporter John Morgan asked White what he plans to say at the conference.

"You'll have to tune in Thursday to find out," White said. "I'll let it speak for itself."

White is a long-time admirer and friend of the president, so his speech will likely be in favor of Trump.

The UFC boss said earlier this year that his friendship with the president spans two decades, when in 2001 Trump persuaded White to hold his first UFC event, UFC 30, at one Trump's properties, the Trump Taj Mahal in Atlantic City.

Their relationship blossomed over the years and Trump invited White to speak at the 2016 Republican National Convention where the UFC boss praised Trump's business acumen, work ethic, and fighting instincts.

At a rally in Colorado in February, earlier this year, White called Trump a fighter, and said later on a podcast that he doesn't "give a s—" if the UFC loses fans because of his association with the president.

White also said Trump calls him first thing on Monday mornings to talk about the weekend fights, then in the summer said he was "awesome."

At the media event this week, White was asked whether he'd be concerned about criticisms regarding his speech.

The combat sports website Bloody Elbow, for example, accused White of being complicit in the political sportswashing of Trump's image. In a separate article, Bloody Elbow argued the UFC is a platform for Trump propaganda.

"Listen, this is America," White said. "Everybody has their own opinions and their own choices. I know that sometimes people go after you because of whatever, but everybody knows what I'm about. I don't give a s—.

"The people that know me, know who I am and know what I'm about. Other than that, I [couldn't] care less. There's tons of guys that hate Trump, whether it's celebrities or whatever, and I'm cool with all of them. We're all cool."

He then added that he does not have to get his speech pre-approved by Trump or the Republican party. "I get up there and say whatever I want."

Finally, White praised Trump for the role he played in ushering sports companies and leagues back into business, after a coronavirus-enforced hiatus.

"I was part of a task force and literally every major sport in the United States was a part of it, and he did a great job with that," he said, commenting on a conference call during lockdown which discussed the best ways sports could return.

"He was instrumental in helping all of us come back, and was very supportive."