From chicken wings to wigs! Twitter users reveal ridiculous ideas for bookmarks when they can’t find a page holder – after Chex Mix horrified bookworms by suggesting people use its snacks

Social media users are sharing their dumbest, silliest ideas for page holders when a bookmark can’t be found, from cookies and candy to pets and children.

The trending Twitter meme kicked off September 9 when the official account for Chex Mix tweeted two images of a book with a handful of the crunchy snack pressed between its pages and the message: ‘Don’t have a bookmark? Try using Chex Mix instead.’

The inadequate bookmark substitute left bibliophiles fuming, with accounts for libraries, publishers, and writers slamming the brand for the bad idea — but it wasn’t long before others started mocking Chex Mix by coming up with their own outrageous bookmark alternatives.

Bright idea? Chex Mix kicked off a viral meme this week when it suggested an odd substitute for a bookmark 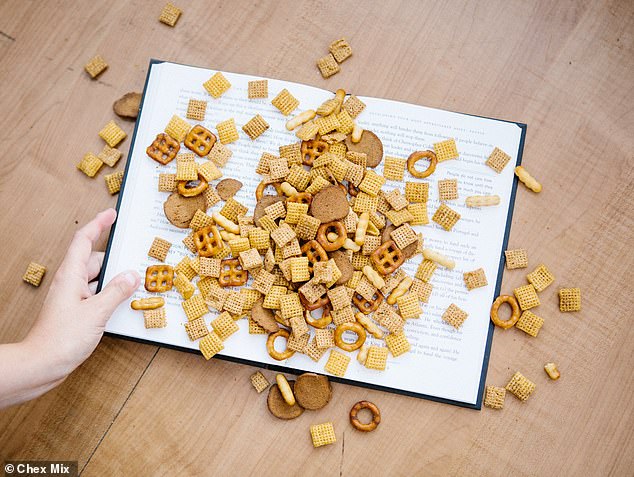 Yikes… The brand suggested using the snack in between pages 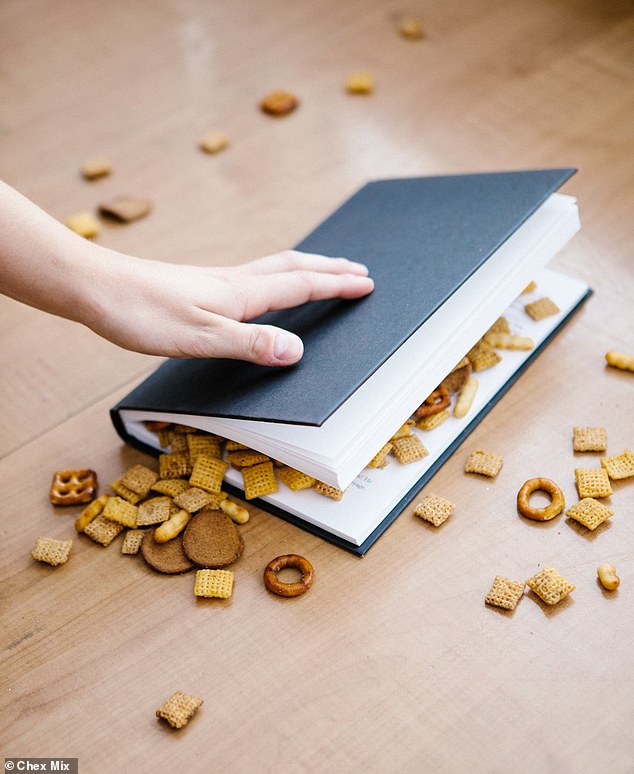 Not thrilled: While Chex Mix’s tweet got 12,000 likes, it also earned plenty of replies from upset book lovers

While Chex Mix’s tweet got 12,000 likes, it also earned plenty of replies from upset book lovers.

‘Literally almost anything else would be better than this. A receipt. A @Postit. Another book. Just not this,’ wrote the account for the Dallas Public Library.

But while those who’ve dedicated their lives to books could barely catch their breath for their indignant anger, others Twitter users took the opportunity to mock Chex Mix for the terrible idea by taking photos of their own ridiculous bookmark ideas.

Suggestions included a dog, a child (by keeping the book open atop his or her head), a road construction caution barrel, an egg, and a piano.

‘Don’t have a bookmark? Don’t you dare use food or water. Use a limb and a belt! Duh. Now you’ll never lose your place or your book,’ wrote Tor.com, adding a picture of a book closed around a person’s hand with a belt wrapped around it.

Publisher The Parliament House suggested ‘using an ancient demonic curse to bind your book and haunt your enemies instead,’ while Kensington books recommended both a ‘desk skeleton’ and boxes of even more books.

Plenty of other brands hopped in, too, using it as a marketing opportunity for Gushers, hair wigs, and chicken wings.

‘Don’t have a bookmark? try using a frozen beef sheet instead,’ wrote Steak-ummm.

‘Don’t have a bookmark? try using vitaminwater instead,’ added Vitaminwater, sharing a snap of the fruit-flavored drink being poured over an open book.

Oreo also went this route, showing a book with Oreo cookies stacked between pages and milk being poured on top. 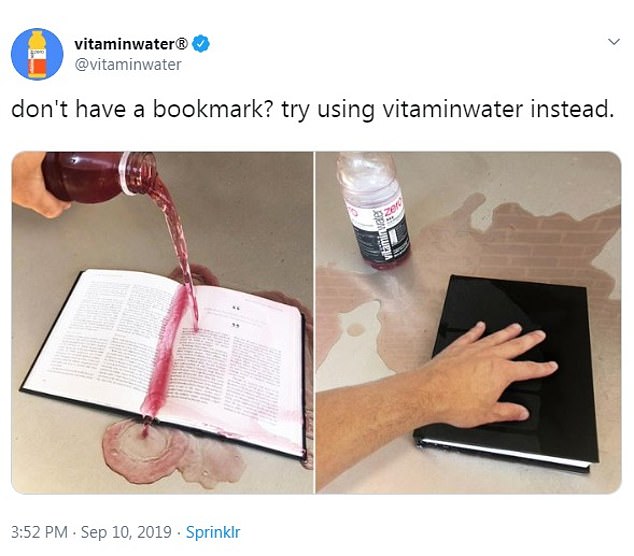 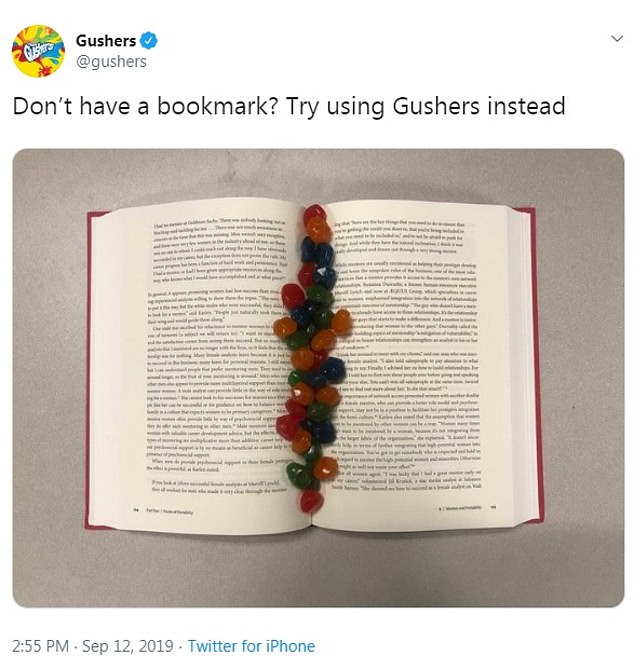 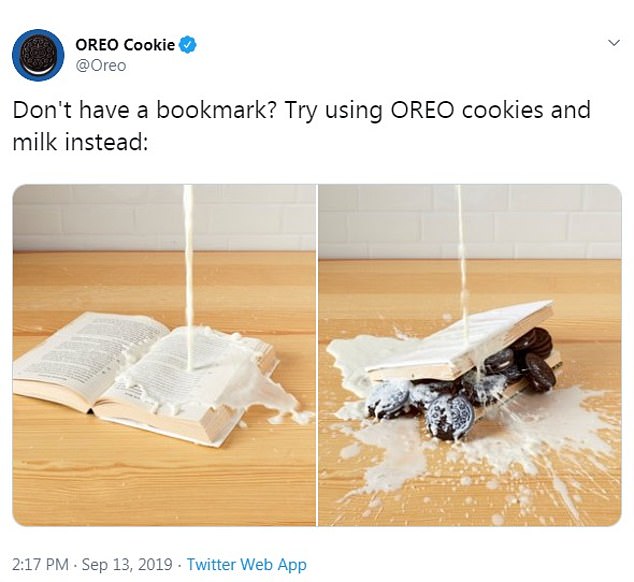 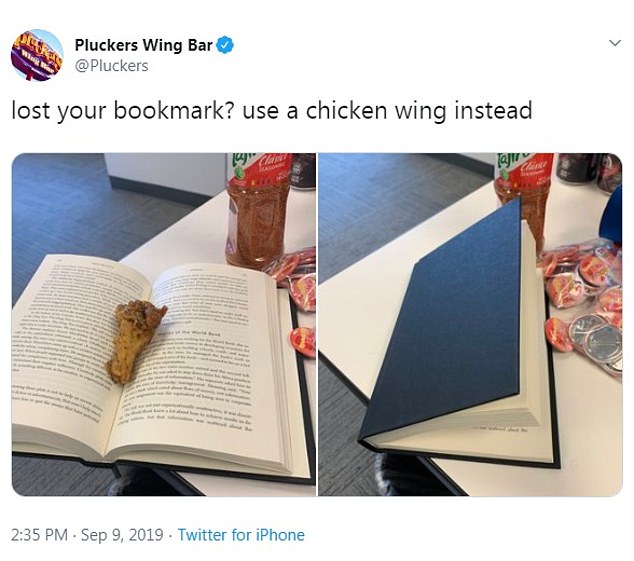 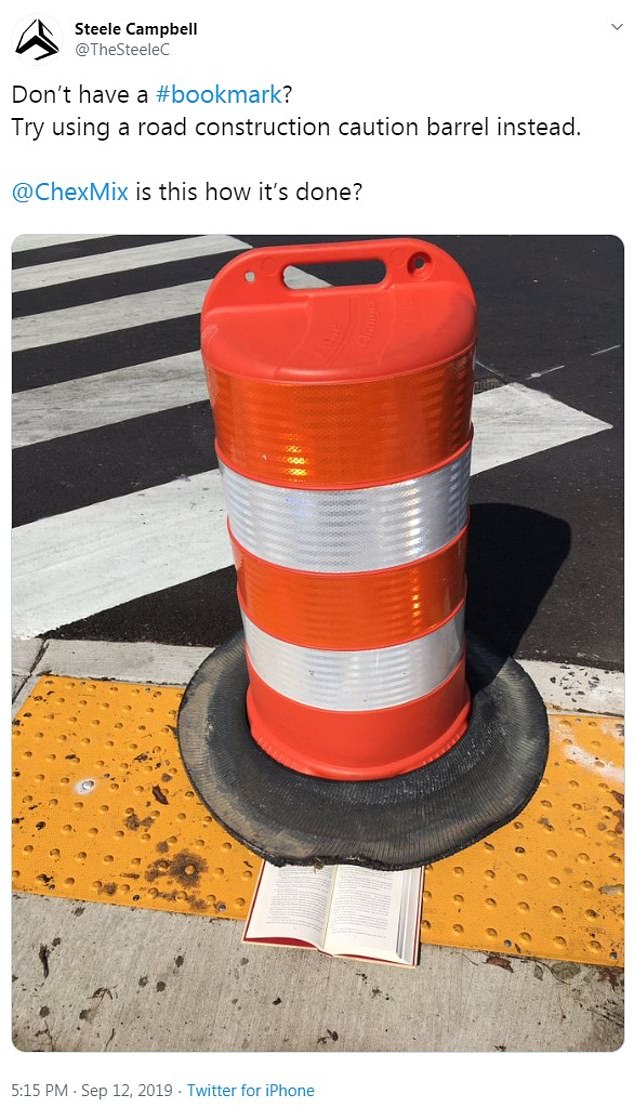 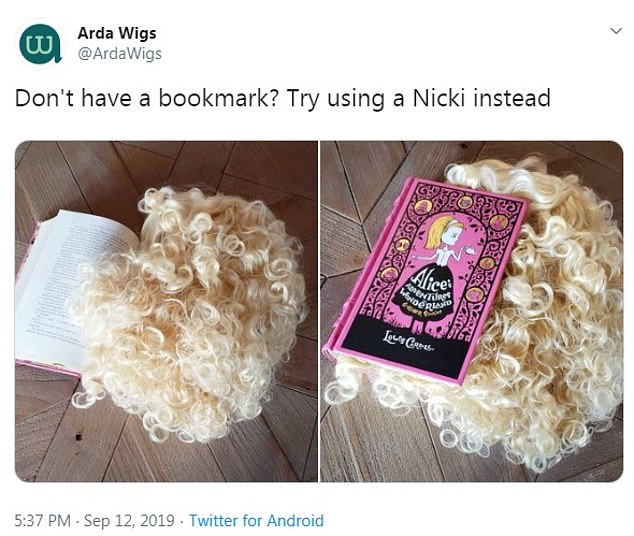 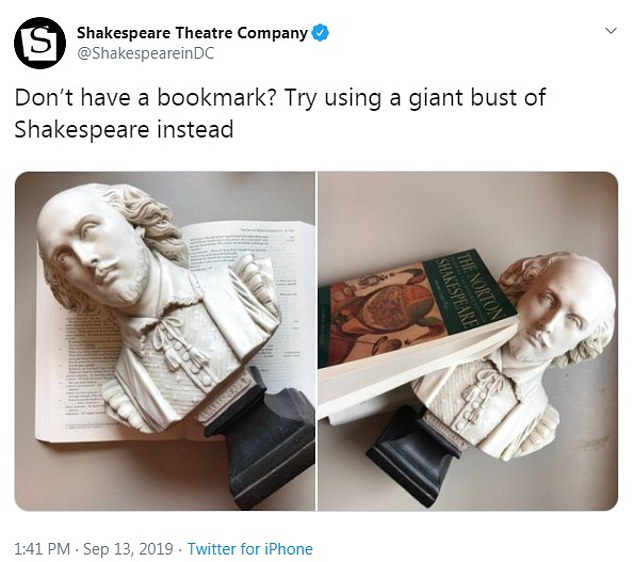 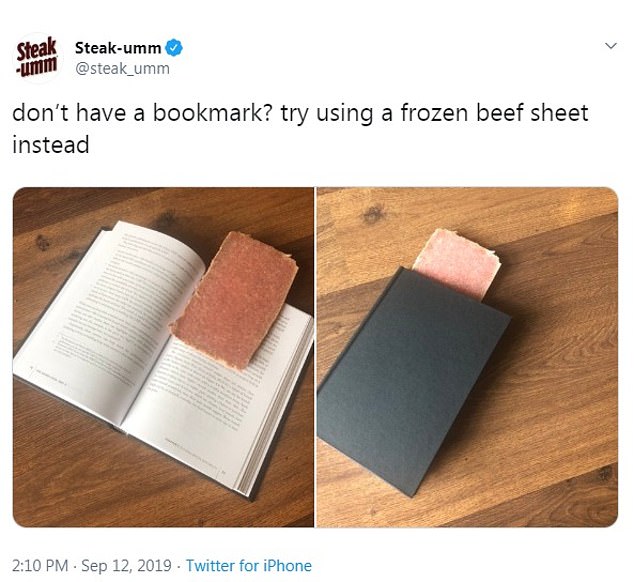 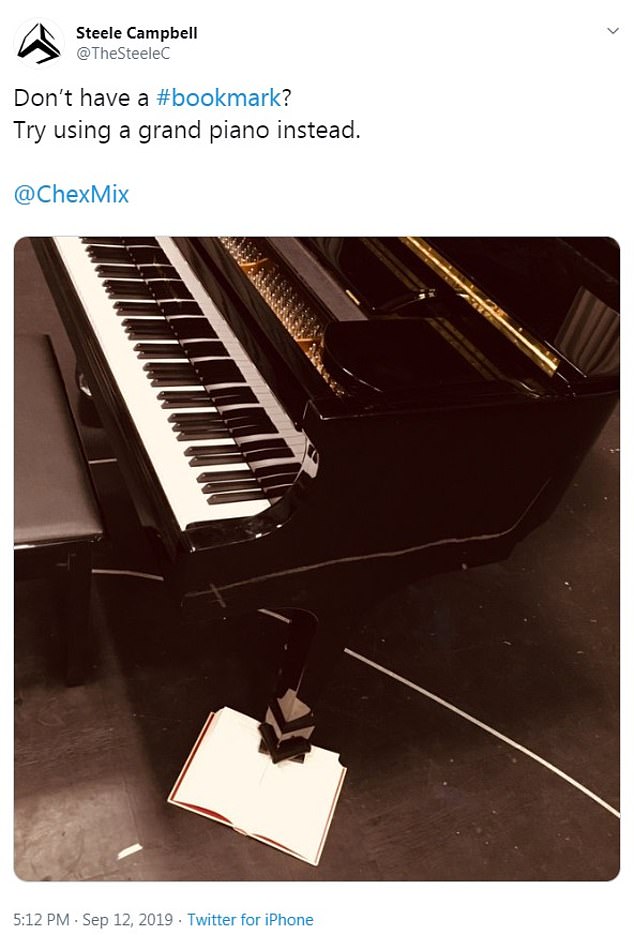 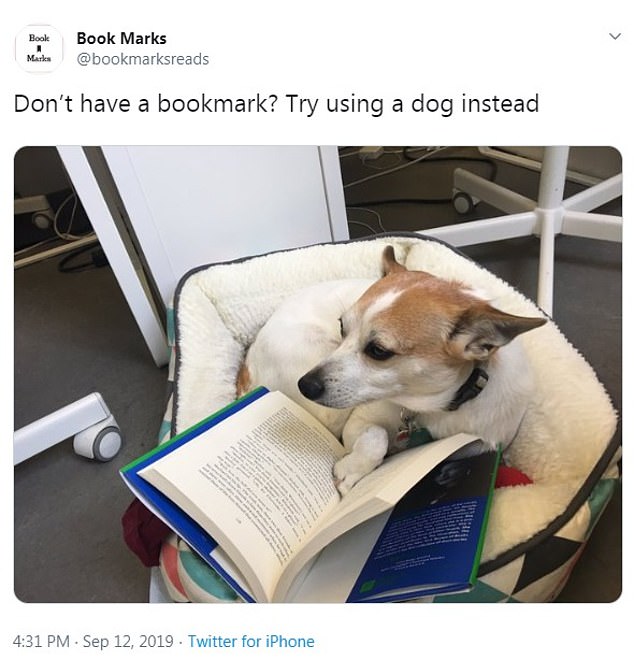 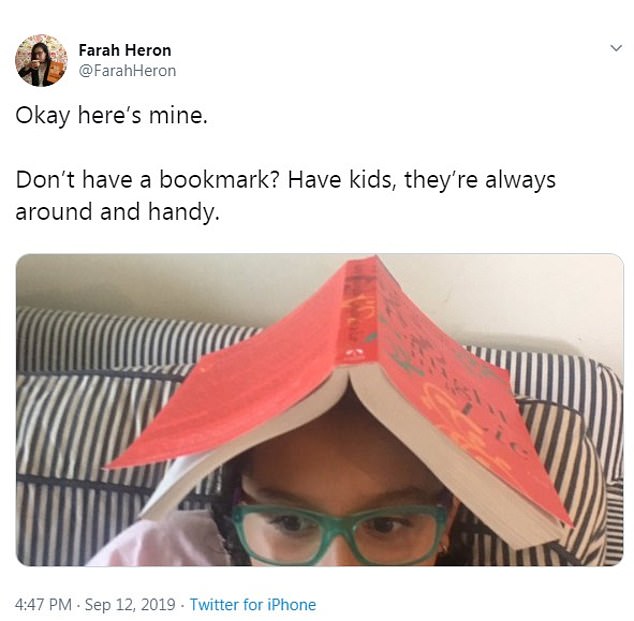 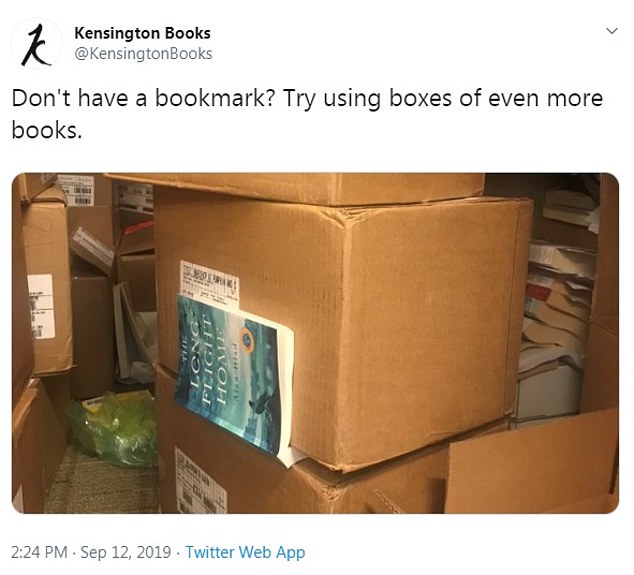 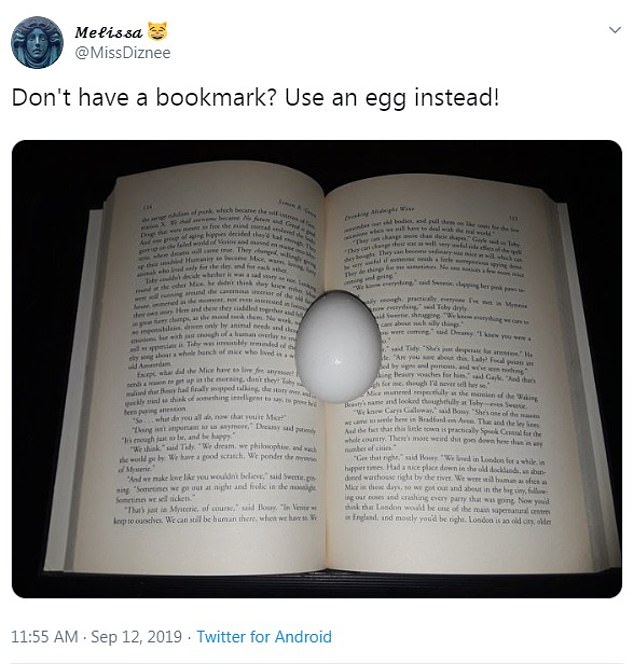 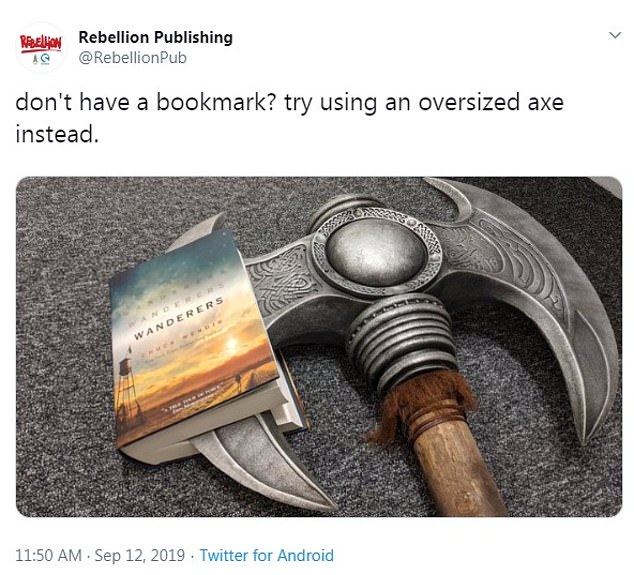 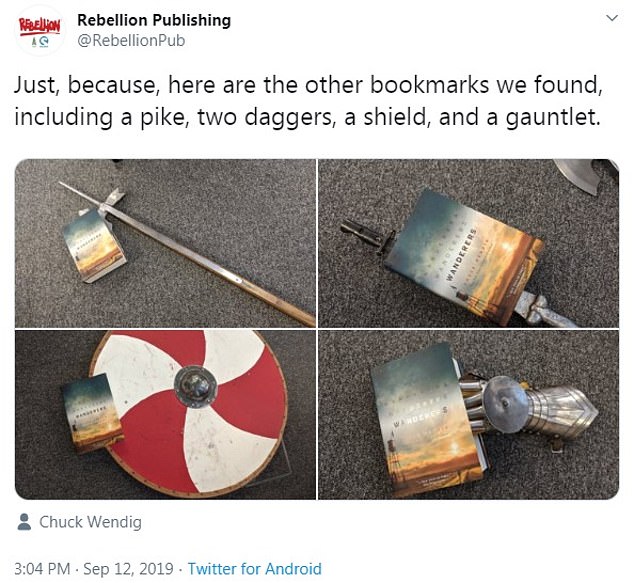 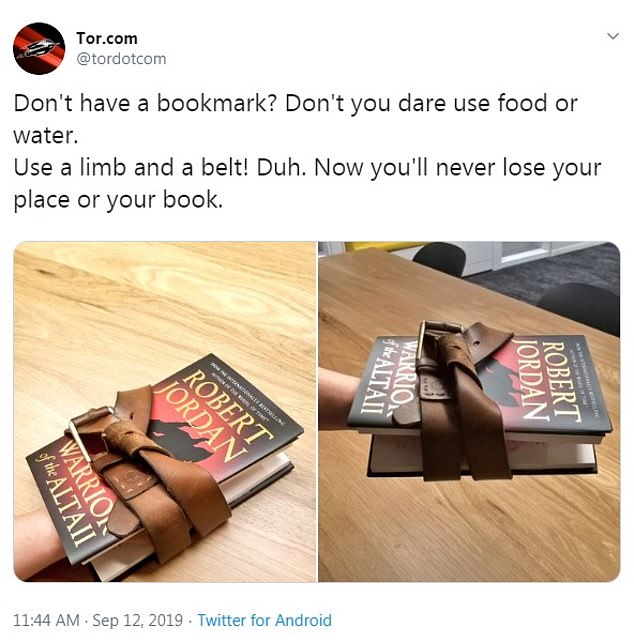 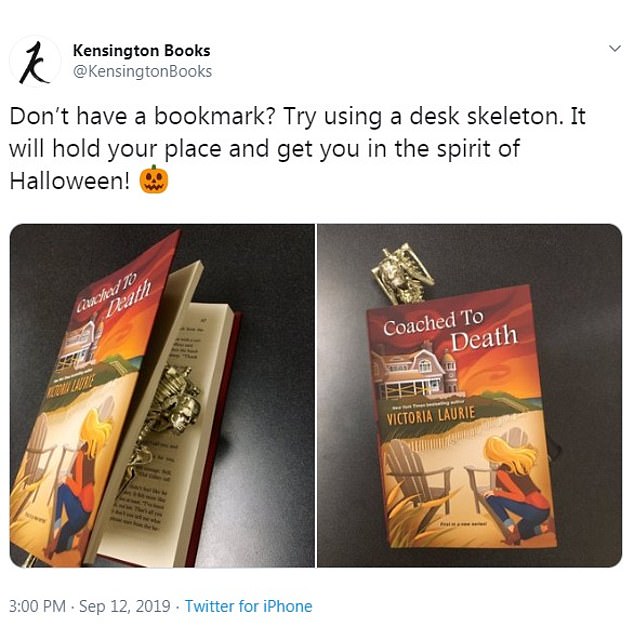 Or just… paper? Dozens of others were inspired to shared their own silly ideas for bookmarks