Two tropical storms were headed toward the Gulf Coast on Monday. Marco and Laura could hit just a few hundred miles apart within 48 hours of each other. Forecasters believe Laura could be a major hurricane when it makes landfall, and residents in low-lying areas have been ordered to evacuate.

Marco is expected to hit the Louisiana coast by Monday. The storm had strengthened to a hurricane Sunday but has since weakened to a tropical storm. As of 5 p.m. ET, Marco was located about 15 miles southeast of the mouth of the Mississippi River with maximum sustained winds of 40 mph, and it was heading northwest at 7 mph, according to the National Hurricane Center.

Meanwhile, Laura, which battered the Dominican Republic and Haiti, leaving millions without power and killing at least 11, is expected to hit the U.S. by Wednesday evening or Thursday. Forecasters expect the storm to bring widespread flooding and life-threatening storm surge.

The storms were heading for the U.S. ahead of the 15th anniversary of Hurricane Katrina devastating New Orleans. Louisiana Governor John Bel Edwards said the window between the two storms could be as slim as 12 hours — and it comes amid the coronavirus pandemic, an added challenge as people leave their homes and head to shelters.

“I just feel afraid that I’m going to lose my house, and I don’t have anywhere to go right now, especially with the virus,” a woman told CBS affiliate WWL-TV.

Marco was falling apart as it headed toward the Gulf Coast, but authorities were concerned about Laura because it was expected to gain strength from the warm waters of the Gulf. “We’re only going to dodge the bullet so many times. And the current forecast for Laura has it focused intently on Louisiana,” Edwards said during a press conference.

As of 5 p.m. ET, Laura was about 175 miles east of the western tip of Cuba, with maximum sustained winds of 60 mph, and the storm was moving west-northwest at 20 mph, according to the hurricane center. Forecasters expected it to move over western Cuba on Monday evening and into the Gulf of Mexico on Monday night.

Laura was expected to strengthen into a hurricane Tuesday and become more powerful Wednesday. 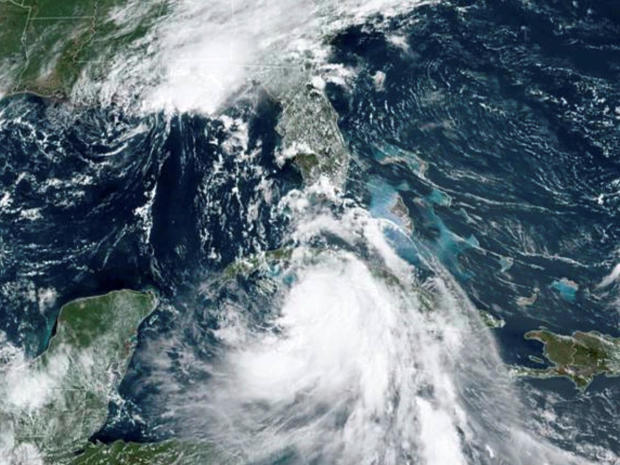