Federal Treasurer Josh Frydenberg has urged the Victorian government to allow schoolchildren of all ages back into the classroom, saying he has heard of doctors prescribing antidepressants to children as young as 12.

All primary pupils will return to school on October 12, after senior secondary students resume on-campus learning on October 7, but no firm date has been set for those in years 7 to 10 to go back. 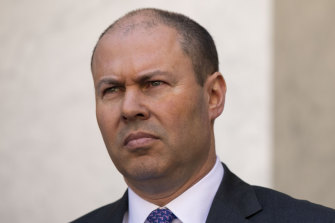 The state government is still assessing the risks of coronavirus transmission associated with all secondary students returning to school and how that might affect further easing of restrictions under its road map.

The Treasurer's call comes after psychologists reported a “huge increase” in children being moved onto mental health plans to deal with the stresses of lockdown and remote schooling.

"I've read letters from well-regarded doctors and GPs … and they speak of the mental health state of young people in Victoria as a result of the lockdown, and the number of cases that they are seeing through their doors skyrocketing," Mr Frydenberg told reporters in Canberra on Tuesday.

"So, I say to the Premier, follow the medical advice but please get Victorian children back to school at all levels."

Victoria's Deputy Chief Health Officer Allen Cheng said on Sunday that modelling on Melbourne's road map out of restrictions was not yet settled on the risks of returning secondary students to schools.

"For secondary school students, we're not quite so sure about the risk and we're still doing further work on this," Professor Cheng said.

The Treasurer's comments come after a group of 10 Melbourne GPs wrote an open letter in recent weeks to the Premier pleading for him to reconsider allowing all children to return to school for term 4 to alleviate the anguish many children and parents were experiencing while students were learning from home during lockdown.

"I have many 12-15 year olds so depressed that I have no other option but to put them on antidepressants," one GP wrote in the letter.

The government announced that all primary students could return could return to face-to-face learning from October 12 instead of only prep to year 2 as was origanally planned because of lower COVID-19 case numbers.

Year 11 and 12 students will return to school on October 7 for the General Achievement Test, but no firm date has been set for the return of students in years 7 to 10, other than year 10 students doing VCE and VCAL units.

A report by the Murdoch Children's Research Institute found schools and early learning centres were unlikely to drive transmission.

Children aged more than 10 years old "probably transmit the virus at a similar rate to adults; while younger children may transmit less," it said.

In addition, COVID-19 in children is usually mild and is rarely life threatening, it said. But the indirect effects of the pandemic – such as isolation, increasing behavioural and development concerns and poorer parent mental health – seemed to disproportionately affect disadvantaged families.

The heads of Parents Victoria and Independent Schools Victoria both said they were hopeful that Melbourne’s lower COVID-19 case numbers would allow an earlier than expected return to school for year 7 to 10 students.

Michelle Green, chief executive of Independent Schools Victoria, said: "Our hope is that the improved case numbers will also see an earlier return to on-site learning for students in years 7 to 10."

Gail McHardy, executive officer of Parents Victoria, said it was important to base the decision on expert health advice.

"At this point in time they are still finishing off the modelling on 7 to 10s," Ms McHardy said.

Schools and the Education Department would need to make sure that young people receive strong support, educationally and regarding their wellbeing when they return, she said.

"Everyone is really tired and we can't ignore the fact that for some it [remote learning] has been OK and for others it hasn’t been OK," Ms McHardy said.

"We hope that the numbers will land where they need to land and the next announcement will be maybe the date will be brought forward for 7s to 10s. But if it's not and it's still going to be around late October, we have to be prepared."

Australian Principals Federation president Julie Podbury said principals she had spoken to in recent days were happy with the government's plans, which were based on "data and the safety of all parties".

Education Minister James Merlino said all decisions made about the return of year 7 to 10 students to face-to-face learning would be based on expert public health advice.

"Remote learning has played a significant role in reducing the movement of parents and students across Melbourne and driving down coronavirus numbers," he said.

One-hundred and thirty nine staff and 373 students have been infected with COVID-19 at schools and early learning centres in Victoria.

Our weekly newsletter will deliver expert analysis of the race to the White House from our US correspondent Matthew Knott. Sign up for The Sydney Morning Herald‘s newsletter here, The Age‘s here, Brisbane Times‘ here and WAtoday‘s here.