The 2020 ARIA Awards will go ahead in November, with some notable adjustments made to ensure the event complies with health restrictions.

While both the Logie Awards and Helpmann Awards were cancelled earlier this year as a result of the coronavirus pandemic, and the future of the AACTA Awards is still up in the air, organisers of the ARIAs were determined for the show to go ahead in some capacity. 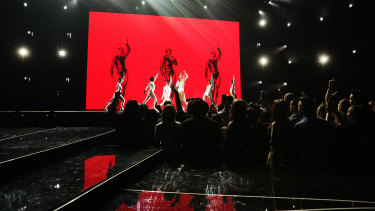 This year’s ARIAs will take place but without a live audience.Credit:Mark Metcalfe

Taking a cue from Monday’s Emmy Awards, the ARIAs will have a combination of live presentations and performances on stage at The Star in Sydney, pre-recorded moments, and live crosses to those celebrities who can't make it on the night. And, for the first time, there won't be an audience.

"We always intended to do something, we just had to consider what the scenario would be," ARIA chief executive Dan Rosen said.

"One thing that the last year – that includes bushfires and COVID – has demonstrated is that music and musicians have been such an important way for us all to cope and get through these challenging times. These awards will emphasise that."

Live music has been one of the industries hit hardest by COVID-19, with workers reporting lost income of more than $340 million in the month after venues were shuttered in March.

Despite the slow easing of restrictions in NSW, border closures and social distancing measures still pose a problem for the ARIAs. Rosen said logistics are still being figured out but he hopes the audience at home will experience an ARIA Awards as good as in previous years. (The show will be broadcast on Nine, which owns this masthead.) 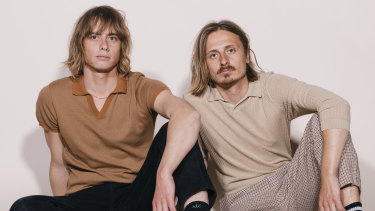 Louis (left) Leimbach and Oliver Leimbach of the Sydney indie pop band Lime Cordiale are contenders to be nominated for album of the year. Credit:James Brickwood

"We are working through a lot of the details at the moment," he said. "With border closures we know there will be nominated artists who won't be able to come so we will be going to them for performances and making sure they are available via video when we announce the winners."

For Sydney duo Lime Cordiale, who are hot contenders for album of the year after 14 Steps to a Better You debuted at the top of the charts in July, it's significant that the awards will be going ahead.

"We have only been to the ARIA Awards once before, as audience members," band member Oliver Leimbach said. "It's been a pretty devastating year with venues closing and festivals going down.

Nominations for the awards will be announced in October with the ceremony to be held on November 26.