Ruby Princess passengers who contracted COVID-19 on the ill-fated voyage have welcomed criticism of NSW Health in a report handed down by the special commission of inquiry into the debacle – but some feel it does not go far enough.

Michelle Kelly, who became ill with the virus on the ship along with her wife Lindsey and two-year-old son Vinnie, said passengers had been "let down" by those were meant to keep them safe. 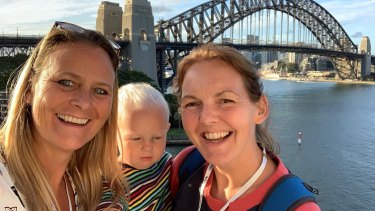 Michelle Kelly and her wife Lindsey contracted the virus on board the ship. They suspect their son, who has suffered seizures since the cruise, did too.

Ms Kelly says she "almost died" and has ongoing symptoms of the virus, while her son has been having seizures since the cruise.

"From the cruise line to the so-called 'health' officials, they didn’t take our lives seriously enough," she said on Friday evening.

"Our lives have been changed probably forever, and I don’t think the report goes far enough to recognise the suffering and loss encountered by innocent, naive and clearly vulnerable people."

Ms Kelly said in any other line of work "people wouldn’t keep their jobs when 27 people had died on their watch".

But others, who welcomed the report's criticism of NSW Health, said they were more interested in what would now be done for those who have suffered and are continuing to suffer after catching the virus on the cruise.

Elisa McCafferty, an Australian who lives in the UK and contracted the virus along with her parents who live on the NSW South Coast, said she felt "pushed off the boat and into another country so quickly … like we were someone else’s problem".

"We should have been quarantined, we should not have been allowed to just disperse around Australia and the globe."

Those who ended up with the virus in the UK became "statistics that didn’t exist", she said, because there was no COVID-19 testing there at that time. She said she had "fallen through the cracks" in terms of health care.

Ms McCafferty said the result of the inquiry "will only benefit the class action" now under way.

"It’s the loss of life, loss of loved ones, loss of income and employment, loss of health. The amount of loss has been staggering and now we know the official findings, maybe something can be done to at least improve the lives of those of us who are left and the long-term sickness that’s going to be affecting some people."

Shuttle car driver Julie Lamrock, who contracted the virus from a Ruby Princess passenger she picked up from Circular Quay, said she agreed that "NSW Health is to blame" but said she is more interested in what will be done to support those suffering as a result than seeing individuals lose their jobs over it.

Ms Lamrock, who hasn't been able to work since March 19 and is continuing to suffer serious post-viral effects from the virus, said the health department "did the wrong thing" but that now "everyone has a job to do".

"Sick people like myself should get help and compensation," she said.

Get our Coronavirus Update newsletter for the day’s crucial developments and the numbers you need to know. Sign up to The Sydney Morning Herald’s newsletter here and The Age’s here.