A single mother-of-three who arrived in the UK from Czech Republic aged four shocked viewers of The Yorkshire Job Centre last night after revealing her hopes to gain £450 per week.

Katrina, 24, from Leeds, sought help from the Southern House Job Centre on the Channel 4 programme after struggling with finances when her boyfriend left her.

Having moved to the country when she was four-years-old, the centre required her to take a Habitual Residence Test in order to claim universal credit of £450 per week.

However the single mother-of-three was left devastated when she discovered she failed the test and said she would be left homeless, saying: ‘My children were born here. I did all my school here, I went to college here. I used to work here, I used to have everything here, so I don’t know what’s the problem.’

But viewers were left less than sympathetic, with one commenting: ‘£450 quid a week in benefits?! Jeez I’m in the wrong game.’ 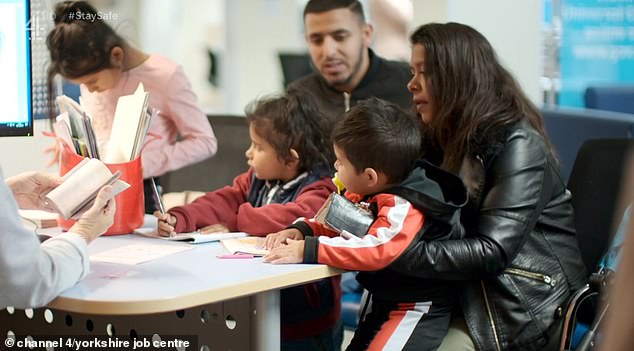 The single mother-of-three moved to Leeds from her home in Bradford after her split from her partner.

She told staff at the job centre: ‘I’m in this situation that my boyfriend has left me so I don’t get no money or nothing.

‘I just want some help. I wasn’t bothered before, because my boyfriend was working.’

Meanwhile she told the camera she’d been left heartbroken by the breakup, explaining: ‘I had a problem with my ex-boyfriend. One day he just went somewhere and I found out he had another girlfriend. 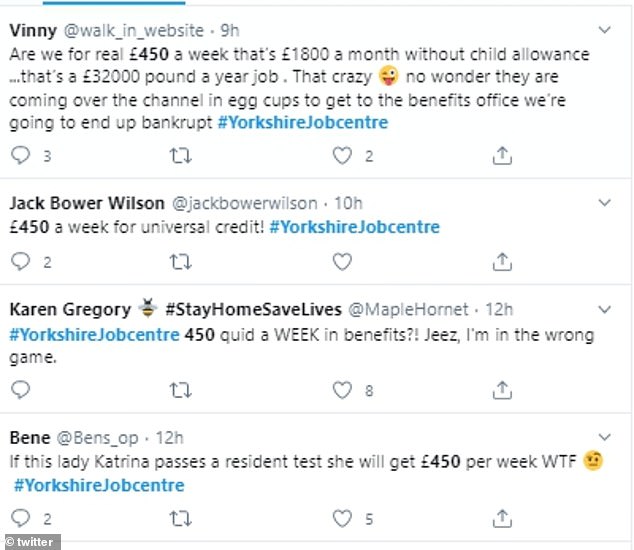 Viewers were left stunned by the programme, with many saying they were shocked by the amount Katrina was eligible to apply for

‘I asked him, and he said he wants to be with her.’

She continued: ‘Maybe I’ve done something wrong. but if I asked him what did I do, he said “Nothing, I’m just leaving you because I’ve fallen in love.” So yeah, I lost everything.’

Meanwhile the single mother called her financial situation ‘bad’, saying: ‘I don’t have nothing for my children and I can’t give nothing to my children.’

In order to claim the benefits from the job centre, Katrina was required to take a Habitual Residence Test. 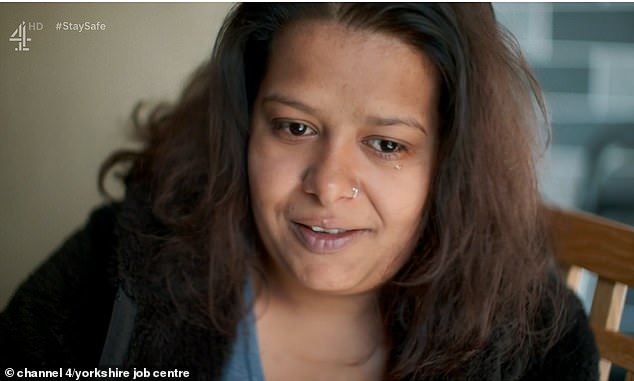 Katrina was left stunned when she learned she had failed the Habitual Residence Test, after admitting she spent several months in the Czech Republic

Without passing the test, Katrina wouldn’t have access to the benefits she said she needed in order to pay the rent and keep a roof over her family’s head.

If successful, she could receive around £450 a week in universal credit.

Struggling with childcare support, the young mother-of-three brought a family friend along to the centre to entertain the children while she took the test.

What is habitual residence?

In general a person would need to demonstrate the following regarding their current residence in the United Kingdom.

The Habitual Residence Test requires you to both have a ‘right to reside’ and to be ‘habitually resident in fact’ i.e. to be able to demonstrate the habitual residence elements above. This test applies to Income Support, Income-related Employment Support Allowance, Income-based Jobseekers Allowance, Pension Credit, Housing Benefit, and Universal Credit.

The purpose of the test is to stop someone claiming social benefits immediately when they enter the UK.

During the interview, she was questioned about whether she’d been abroad during the last two years, and admitted she had spent two months living in Czech Republic.

Meanwhile she was also asked to provide evidence that proved she had worked at a local supermarket.

The staff at the centre assured her that she would hear whether she passed within 48 hours.

However it wasn’t not long before things take a turn for the worse for Katrina, and she revealed the rent on her home was in arrears and the landlord had given her just days to pay up.

She explained: ‘If I don’t get the money I’m going to be out. I’m  not sure what’s going to happen next.’

And just four days later, Katrina received a message on her phone alerting her that she failed the test.

She was left stunned, saying: ‘They don’t even know what they’re doing. Stupid people.’

Failing the test meant Katrina wasn’t entitled to any benefits at all and she quickly told the camera the children had no idea what was going on with their finances.

With tears rolling down her cheeks, she said: ‘I haven’t told them. They don’t have to know what I’m going through.’

Days later,  she said she had been denied all benefits, and failed to raise any cash for her rent, with a deadline set by the landlord coming and going.

She explained: ‘Right now I am homeless. I don’t have the money. The rent is not coming from nowhere so [the landlord] is entitled to chuck me out. I can’t do nothing about it.’

One of the staff members the job centre, Brahim, told the camera: ‘People say just go back to where you come from. But people don’t know how difficult that is.

‘In England, you can dream.’

After visiting citizen’s advice, Katrina took her children to  a local food bank where they are given food and toiletries.

Brahim said: ‘Food banks make me feel we are failing as a society. But sometimes you have no choice but to go there because it’s the only thing left for you or your family.’

But Katrina was able to turn her luck around within days, finding a job as a cleaner at a concert venue in town. 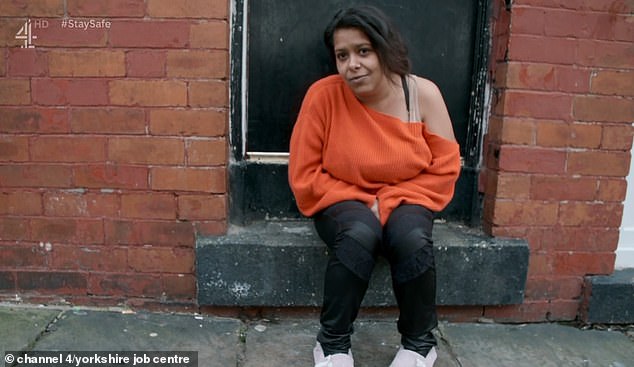 She explained she felt excited to start the new job, saying: ‘Without work, you don’t get nothing. At least I get some money to feed the kids and pay the rent.

‘You have to do what you need to do.’

Just one month later, things changed again for Katrina because she was able to show her new job as evidence for her residents test and she went on to pass.

With the advance on her universal credit, she moved into a new house and the school aged children started at the local primary. 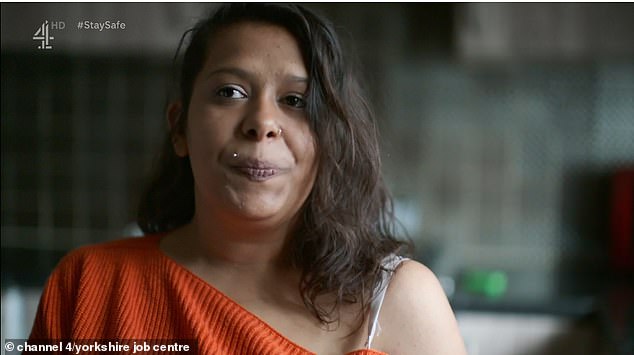 After learning she had failed the resident’s test, Katrina went on to visit a local food bank to gather supplies and toiletries for her family

She said: ‘I don’t have to think about where do we have to go.

‘Now they’ve got everything they want, they go to school, I’ve got the house, I feel relaxed.’

Many viewers were left shocked by the programme, with one commenting: ‘Infuriating television. Some people are getting away with murder.’

Another wrote: ‘I’m sure we are constantly told that folk are “starving” and “can’t make ends meet” on benefits.’ 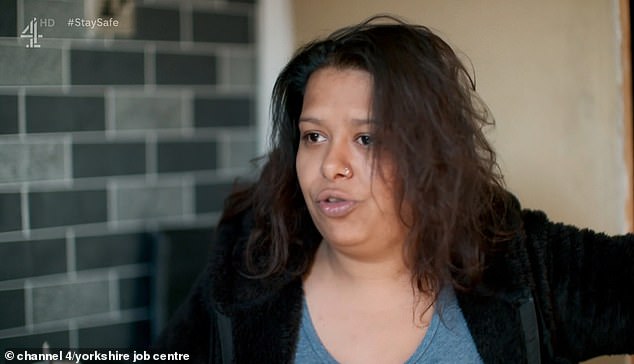 Katrina went on to find a job locally as a cleaner which allowed her to retake and pass the test, granting her £450 per month

‘No wonder they are coming over the channel in egg cups to get to the benefits office.

‘We’re going to end up bankrupt.’

Another wrote: ‘If this lady Katrina passes the resident test, she will get £450 a week. WTF.’