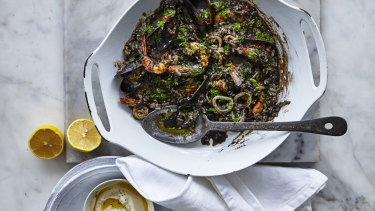 Monday was Spanish night. I whipped up an authentic saffron-infused seafood paella – even pronounced it “pa-eeeee-ya” when I served up, that’s how authentic it was.

My son had a mouthful and said, “Did you use bomba rice?” I said ,“Uhhh no … I used arborio.” He said, “Shame. Bomba rice has the ideal liquid absorbency properties for paella. And it’s not pronounced pa-eeeee-ya, dad. It’s pa-EHHHHH-ya! PA-EHHHHH-YAAAA!”

Tuesday night: Peri Peri Chicken & Moroccan Couscous. My wife had a mouthful and said, “Did you make your own stock?” I said, “Uhhhh no … I used a pre-made supermarket stock."

My inner rabbi said, “Disgraceful! You’re defiling the 5000-year-old dietary laws of your people just for a few delectable morsels of pork!!! Which you forgot to render by the way. Render the pork fat next time, you putz, render!”

By Thursday, I was anxious and exhausted: I needed a meal that would dazzle the Mother, the Son and The Holy Inner Rabbinical Ghost.

So I settled on a dish that few attempt because it’s obscure, it’s complicated, and it has smutty schoolboy connotations that don’t sit comfortably with many diners: Jamaican Jerk Chicken.

But you just want the recipe, so you keep scrolling down … she likes quilting too … scrolling … and “fabulous shoes". Eventually you come to … The Recipe’s Back Story: "Carl and I are still riding a Jamaican post-vacation high, so I tried to recreate the jerk chicken we had every night at our resort!”

But you just want the recipe, so you keep scrolling down… “Carl complimented me on my Rasta accent, ya’mon … poor Carl got jerk sauce on his chin!…” Until eventually you get to … The Pre-Recipe Tips, Chapters 1 – 40, including “Delicious Jerk Side-Dishes” and “How I Cleaned Jerk Sauce Off Carl’s Shirt”.

But you just want the recipe, so you keep scrolling down … scrolling-finger starting to bleed … until you finally reach … The Actual Recipe.

But it’s an American recipe so you have to do complex imperial-to-metric conversions, diabolical Fahrenheit-to-Celsius mathematics, confusing scallions-to-spring-onions-substitutions … and after about an hour of reading, another hour of prepping, two hours of cooking, my Jamaican Jerk Chicken was finally served to my family and eaten in about 11 minutes.

“Not too bad, cooking guy,” they said. Happy with that. A three-Michelin-star review.

Danny Katz is a Melbourne humourist.