WalletHub analyzed the data based on various educational parameters.

The states with the most educated people are concentrated in the Mid Atlantic and some of the least educated populations live in states in the Deep South, according to a study personal finance website WalletHub.

WalletHub analyzed how many people 25 years old and older have completed certain educational benchmarks, like bachelor's degrees, and the quality of that education throughout the 50 states, to come up with its ranking for the most and least educated states in 2020. But the list could provide insights for states on how to spend education dollars, according to WalletHub experts.

"Our national and states economies are increasingly knowledge-driven," Loren John Rullman, vice provost for student affairs at Grand Valley State University in Michigan who reviewed the data, said. "When states invest in post-secondary degrees, certificates, training, and skill development, they are investing in their economies. Even traditional industries and jobs that previously drove state economies now more often than not require the advanced skills that post-secondary education provides."

Education has long been linked to higher income and a lower chance of unemployment, which is why millions of Americans enroll and graduate from college in the U.S. every year.

"The most prosperous states tend to be those with the most highly educated workforce," Rullman said. "The economic impact of universities in most states is typically measured in the billions of dollars. Most research shows a correlation between an educated workforce, corporate location interest, income levels, and job stability."

US EDUCATION SPENDING: STATES THAT SPEND THE MOST, LEAST

To make its determinations, WalletHub compared states across the U.S. for educational attainment and quality of education. Experts at the personal finance website used a total of 18 metrics to create its ranking, including the share of adults age 25 and older with high-school diplomas, college and graduate degrees, as well as National Blue Ribbon Schools per capita, enrollment and test scores.

Other metrics the study accounted for were summer learning and voucher programs, class scoring and racial and gender gaps. The states were graded on a weighted 100-point scale with a score of 100 meaning the most educated. 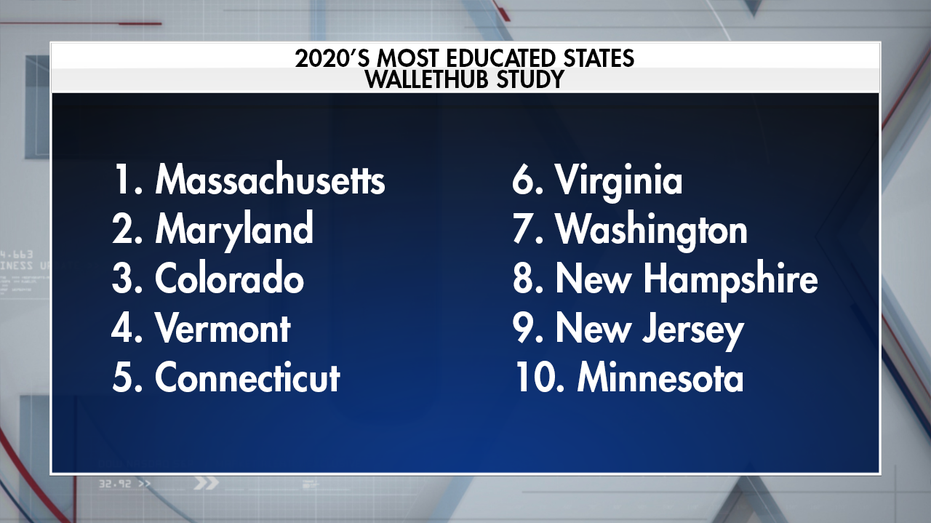 It turns out that Massachusetts, the home state to Harvard University, has the highest school system rating at 21.1 percent, according to WalletHub. The study noted this percentage is 16.2 times higher than Mississippi, which takes 50th place in the ranking with its school system rating of 1.3 percent.

Notably, the state of Vermont has the lowest racial gap in terms of educational attainment with African Americans age 25 and older holding a bachelor’s degree at 28.56 percent. This percentage is higher than Vermont’s white demographic, which is at 22.83 percent, according to WalletHub. 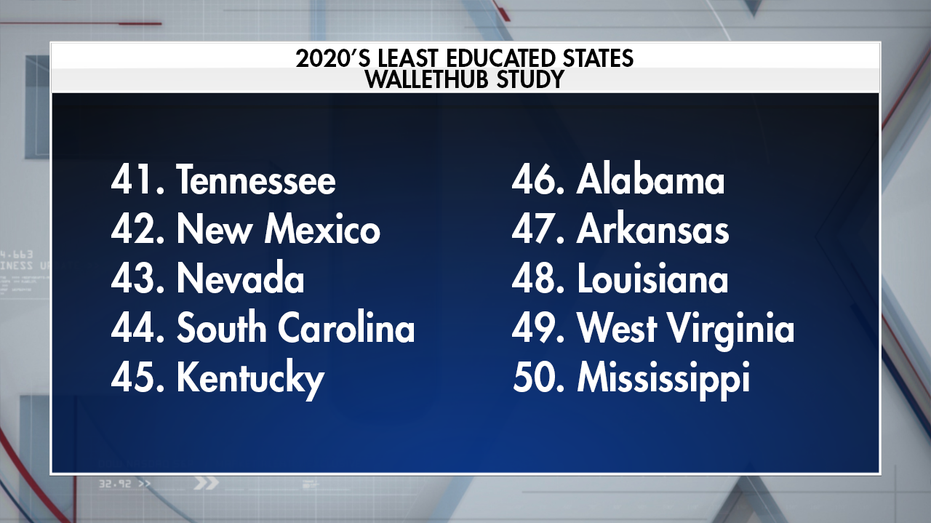 The 10 states that made WalletHub’s least educated list were primarily in the South, including Tennessee, South Carolina, Kentucky, Alabama, Arkansas, Louisiana, West Virginia and Mississippi. Nevada and New Mexico were the two outliers in the West and Southwest.