A female SO11 surveillance officer has described how she was seconds from being run over by the gang’s digger as it smashed into the Millennium Dome to launch the raid in The Millennium Dome Heist With Ross Kemp.

In tonight’s episode of the ITV documentary, which airs tonight at 9pm, Carol, speaking for the first time ever about the 7 November 2000 raid, tells how she was coincidentally close to the door which the digger crashed through to get into the building.

‘It was probably about 5-10 seconds afterwards. I mean, if we’d have been stood there we wouldn’t have a chance,’ she says. ‘We heard the crash turned round and realised, ‘Oh my God it’s coming in.’

‘It was this huge JCB with a bucket on the front. And I just remember the bucket bouncing up and down, orange flashing lights. It’s going fast. It wasn’t stopping. It’s coming straight for us.’ 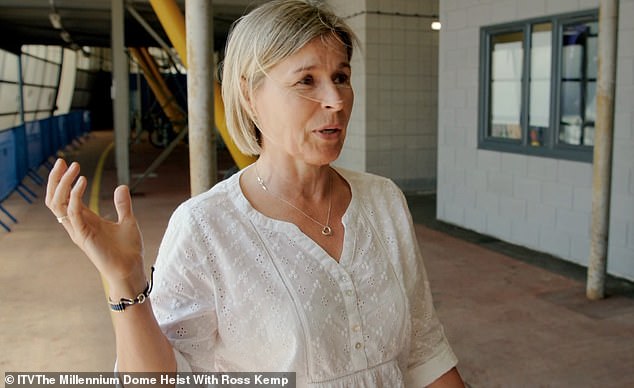 In tonight’s episode of ITV ‘s The Millennium Dome Heist With Ross Kemp, Carol (pictured), speaking for the first time ever about the raid, tells how she was coincidentally close to the door which the digger crashed through to get into the building 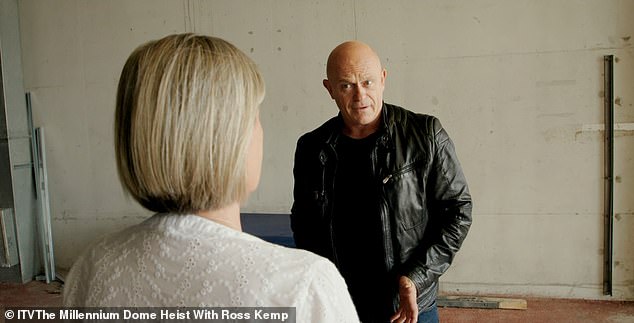 Ross Kemp (pictured) hears how Carol was armed with a weapon at the time, but that it was in her bum bag 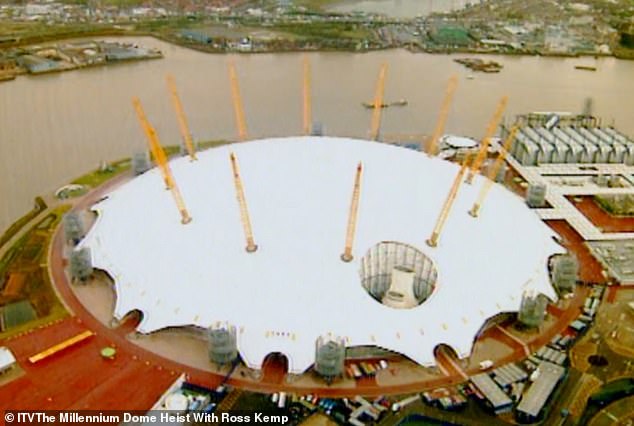 The documentary follows Ross Kemp on an investigative journey to discover the untold story of the Millennium Dome heist – one of the biggest and most audacious gem raids ever attempted on British soil. Pictured, the Millennium Dome 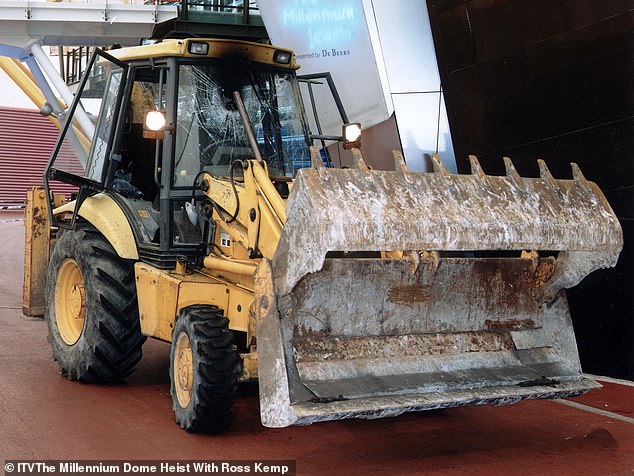 She went on to explain how she was armed, but that her weapon was in her bum bag at the time.

‘That didn’t enter my head. We were fleeing – we were both running,’ she adds.

The documentary follows Ross Kemp on an investigative journey to discover the untold story of the Millennium Dome heist – one of the biggest and most audacious gem raids ever attempted on British soil.

Twenty years on from the raid, it features never-before-seen photographic evidence as well as surveillance footage to piece together the movements of the gang, which consisted of seven criminals equipped with a bulldozer and a speedboat as they set out to steal £350 million worth of diamonds from the Millennium Dome.

Instead the raiders were foiled by an undercover Flying Squad operation, every bit as bold and daring as their own.

Ross tracks down the key players in the police operation, many of whom have never spoken publicly before – from veteran detectives and surveillance operatives who shadowed the gang’s every move, to the firearms officers who made the arrests inside the diamond vault.

He takes them back to the original crime scenes to reflect on the operation, blow-by-blow, to reveal the behind-the-scenes story of how they managed to track and then catch the would-be robbers in the act.

The target was £350 million worth of De Beers diamonds – a unique collection of gems with the 203-carat flawless Millennium Star diamond as its centrepiece. 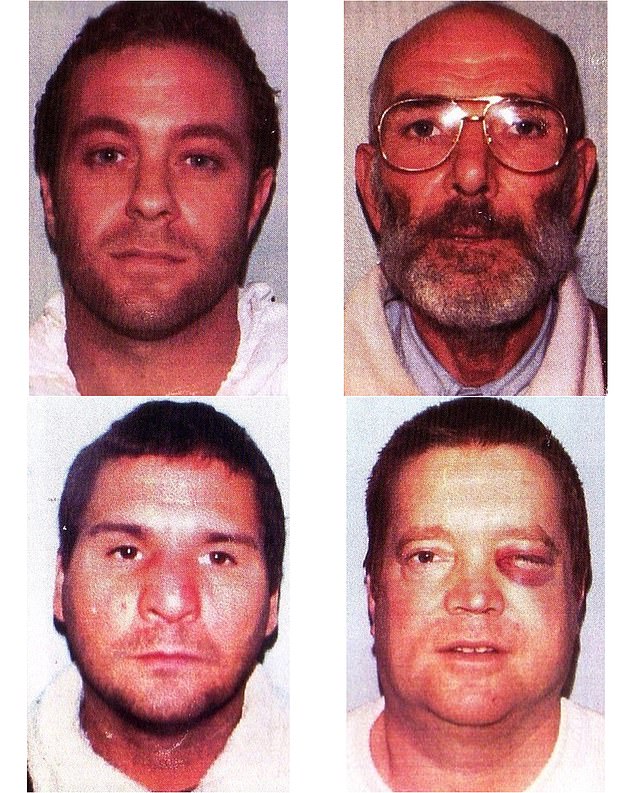 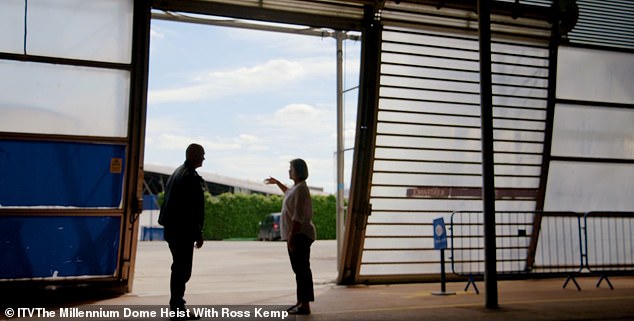 Carol (pictured) explains how if she’d have been stood at the shutters, then she ‘wouldn’t have had a chance” 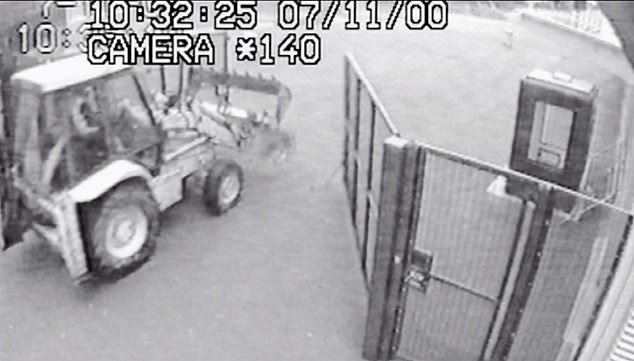 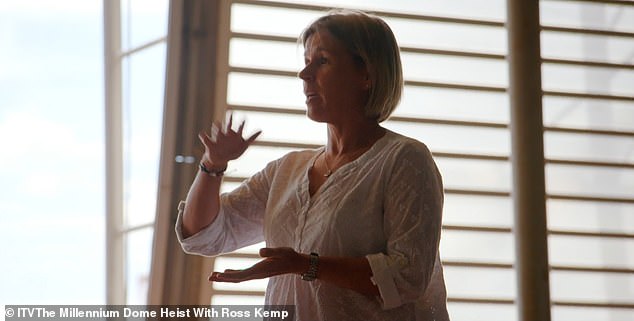 The diamonds were on show to the public at the newly opened Millennium Dome landmark and tourist attraction where on November 7, 2000, among families and school children, the gang decided to strike in broad daylight.

They smashed through the perimeter fence with a JCB, throwing smoke grenades and using nail guns and sledgehammers to steal the diamonds.

The story started nine months earlier when a gang attempted to rob two security vans in London and in Kent.

Four men found guilty of plotting to carry out the robbery of the millennium by snatching £200 million worth of diamonds from the Dome were jailed for between 15 and 18 years.

Raymond Betson, 40, of Chatham, Kent and William Cockram, 49, from Catford, south east London were jailed for 18 years each.

Robert Adams, 57, of no fixed address, and Aldo Ciarrocchi, 32, of Balaclava Road, Bermondsey, south east London, got 15 years each.

Lee Wenham was jailed for nine years for his part in organising the ill-fated diamond robbery, while Terry Millman died of cancer while awaiting trial.

Using a truck-mounted steel spike, their plan was to violently prize open the van’s back door and force the occupants to hand over the cash with firearms. In both robberies, they failed to steal any money but managed to escape via a speedboat.

Police intelligence suggested that something even bigger was planned, so officers secretly set up the Flying Squad’s biggest and most expensive operation in its 100-year history, codenamed ‘Magician’ to try to catch the gang of criminals red-handed.

Jools Lloyd, whose undercover team followed the gang for several months, even tracking their speedboat to Whitstable in Kent, on an apparent test run. He said his excitement was building.

‘We’ve got two previous robberies where a speedboat, a boat’s been used,’ he says. ‘And it’s unique. It had almost gone past the gut feeling, you know, but we were on the right people. We knew that. And then you kind of start getting excited a bit.’

If this was the next target, then it would net a bigger haul than Brinks Mat, Hatton Garden, and the Great Train Robbery put together.

Ross reveals how this nail-biting operation played out with an army of surveillance operatives following the gang around the clock, crack teams of firearms officers smuggled into a tunnel under the Dome and on speedboats, and the detectives ready to make the call with the reputation of the Met Police at stake.

Clive Rew from the Met’s firearms unit, was asked to plan a river arrest for when the robbers made for their speedboat moored up outside the Dome, and explains that such a plan posed an even higher risk to the public if the gang were armed.

‘That was one of my fears if the gang was so desperate to get away,’ he says. ‘They could easily grab a member of the public, take them as a hostage, use them as a human shield.’ 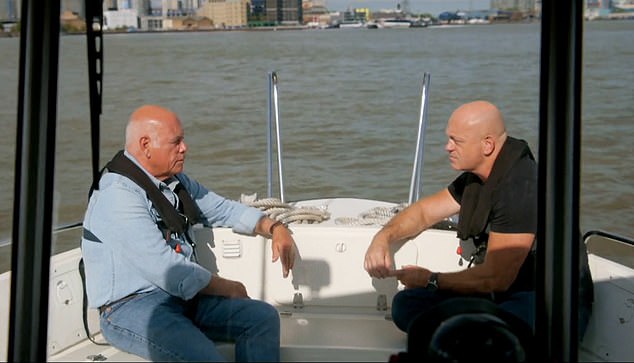 Ross Kemp (right) interviews Clive Rew on the River Thames next to the Dome / Greenwich peninsular. Clive was the SO19 firearms officer who arrested the getaway boat driver on the Thames 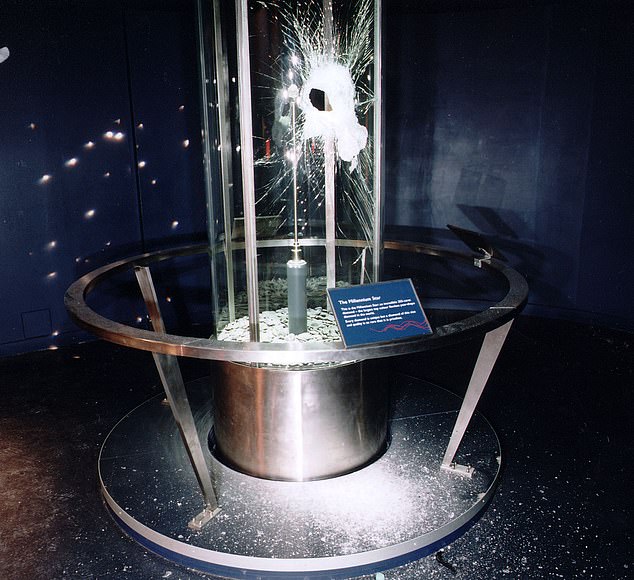 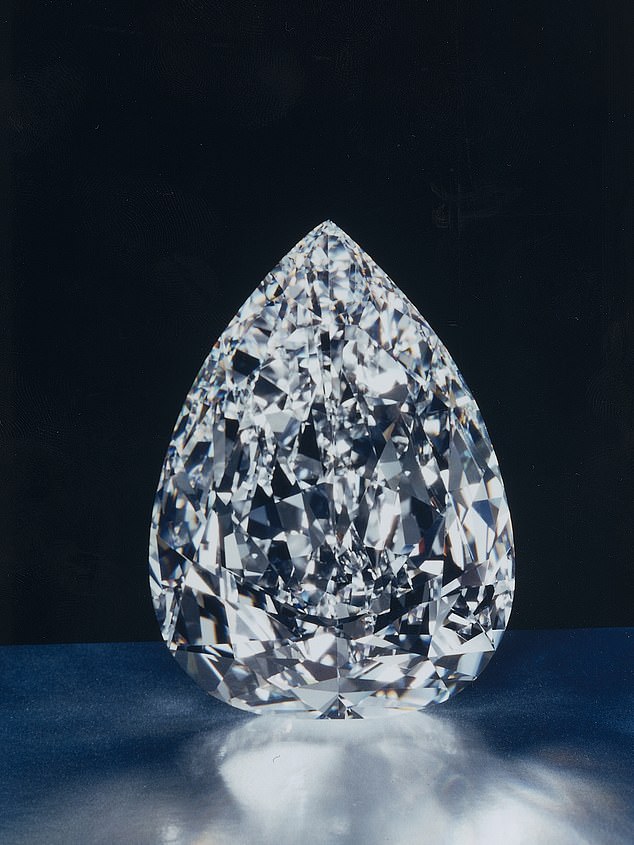 The raiders sprung a surprise by using the JCB to batter their way inside the Dome and driving it up to the entrance of Money zone, where the Dome was encased in a high security cabinet.

Under the dome, firearms officers hid inside a specially-constructed space in a service tunnel, waiting to spring out to try to arrest the raiders when the signal came.

One of them, known as Steve, says: ‘We waited…. And waited. Time slows down. It’s quite weird. And then it came over the radio. Those words we’ve been waiting for. Attack, attack, attack.’

For the first time, the film reveals the untold story of a crime that marked the end of a criminal era and what would become one of the most daring heists ever attempted in British history.