The production of Channel 10 reality tv show The Masked Singer has been suspended due to a COVID-19 cluster, after a crew member tested positive to the virus this week.

There are now seven cases connected to the show's Melbourne set, the Department of Health and Human Services confirmed on Saturday night. 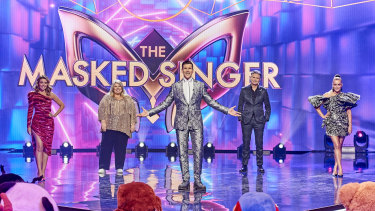 With Günsberg also the host of reality TV show The Bachelor, the announcement that all cast members are to self-isolate could put any remaining filming in peril. Production of the dating show was previously suspended in March due to COVID-19 fears.

A spokeswoman for the Victorian health department said "early investigations have determined that the site should close", with all those at the Docklands studio since Wednesday to isolate until further advised.

"The department is liaising with the production company and site management to ensure all appropriate public health actions are taken including cleaning and contact tracing," the health department spokeswoman said.

In a statement posted to social media, the show confirmed that all crew members were being "monitored closely and are in constant contact with medical authorities".

"Production of The Masked Singer has been immediately suspended as a result of a crew member receiving a positive test result for COVID-19," the statement said.

"The health and safety of the community, and our staff and production partners is our No.1 priority. 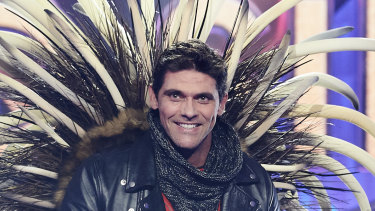 The reality TV show, which launched in Australia last year to much fanfare, is part singing competition part guess-the-celebrity-behind-the-costume.

Season two's debut, which aired last week, recorded a year-on-year drop in viewers with an average of 733,000 people watching across the capital cities.

The ratings were down from 1.2 million in 2019. Those figures represent a 37 per cent decline in metropolitan viewers year-on-year.

For Tuesday night's reveal episode, viewership peaked at 916,000, with the show winning its timeslot.

As one of the few major TV programs still filming during Melbourne's stage four lockdown, the show's crew was subject to numerous on-set safety protocols.

Former tennis star Mark Philippoussis, the first contestant to be eliminated from the competition, said the on-set health and safety measures were "intense" but necessary.

"Everyone was always wearing a face mask and there was hand sanitiser everywhere," he said.

"Everyone gets tested beforehand. You can't walk around whereever you want, you can't go to the bathroom whenever you want and there's no talking [off set]."

Philippoussis said the only time anyone came within 1.5 metres of him was when he needed help getting into his echidna costume, which "easily weighed 20 kilograms".

Judge Jackie "O" Henderson, who lives and works in Sydney, was recording her breakfast radio show from her Melbourne accommodation rather than travelling between the two cities.