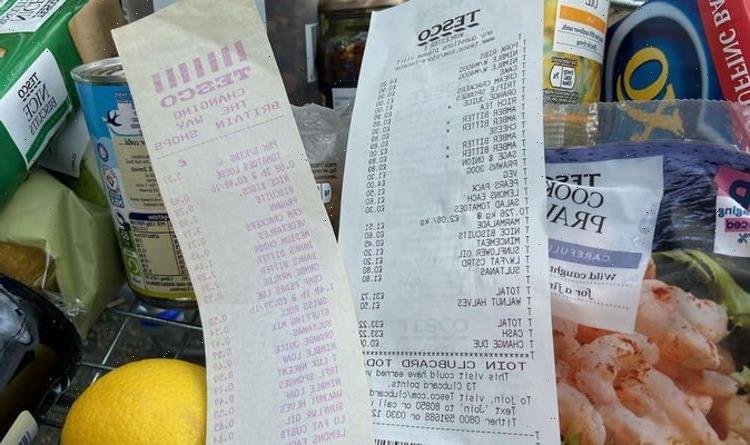 A couple kept the scrap of paper as a memento of their first shopping trip together after moving into their new home. The receipt features the supermarket giant’s traditional blue-and-white striped logo along with its original slogan, “Changing the way Britain Shops”.

The receipt revealed that a pack of Nice biscuits cost just 28p and a bag of prawns were £3.79.

While most groceries were cheaper in 1989, including lemons which cost 16p compared to 30p and medium cheddar cheese which cost £1.14 instead of £2 now, some items were more expensive.

The receipt, dated November 15, 1989, was handed in by the couple on their 64th wedding anniversary.

Steve Winfield, the store manager of the branch in St Peter’s in Worcester, was stunned to be given the relic by the pair.

He said: “It is amazing really, my team leader Jo asked me to come and meet two customers who were in store on their 64th wedding anniversary.

“They have been shopping with us for a long time and we presented them with flowers and that’s when they told me they still had the receipt from the first time they shopped at the store.

“They had just moved to the area and had kept the receipt from their first shopping trip.”

The store manager finds the insight the receipt gives into shopping habits “fascinating” and is grateful to have been given the chance to see it.

Mr Winfield added: “What I find fascinating is they were probably doing a bit of a Christmas shop because you can see mincemeat and walnut halves on there.

“They had pork ribs but that would have most likely been bought off the counter we used to have.

“It’s interesting to think about the way we used to shop 30 years ago and wonder how we will shop in 30 years’ time.

“Of course back then we didn’t have Scan as you Shop or the self service tills, you wouldn’t have had online or home delivery or even the Clubcard.”