Sydney will host the Australian premiere of a major international art exhibition after poaching the event from Melbourne when the city was forced into strict lockdown following its second wave of COVID-19.

Van Gogh Alive is a multi-sensory, interactive exhibition that has shown in 50 cities worldwide and attracted more than 6 million visitors. 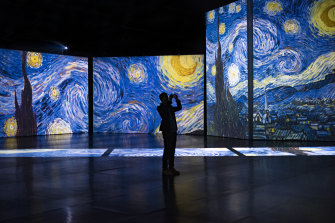 It was due to mark the grand opening earlier this year of The Lume in South Melbourne, a new 2000-square-metre immersive digital art gallery. The Lume's launch has now been postponed until 2021.

The exhibition will instead be held at the Royal Hall of Industries in Moore Park in September, marking the first time the venue has hosted an event since April 2019 and coming after the Sydney Swans surrendered their lease on the building earlier this year.

The Sydney exhibition will be the biggest version of Van Gogh Alive anywhere in the world, up to three times larger than in some cities. The exhibition will feature huge visual art projections synchronised to a musical score and the release of aromas.

The mastermind behind the project is Melbourne-based Bruce Peterson whose company, Grande Exhibitions, presents travelling experiences around the world. Mr Peterson, who owns The Lume, said the objective of Van Gogh Alive was to attract new audiences to art.

"Our mantra is to take art and culture out to the people," Mr Peterson said. "We're looking for educational outcomes and the only way you can get that is by entertaining. By entertaining you engage them and by engaging people you get some learnings. It's opened up to audiences who wouldn't normally go to a traditional art environment." 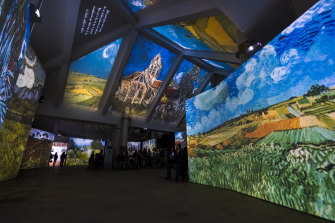 The interactive display features the equivalent of up to 40 IMAX screens. Credit:Grande Exhibitions

Mr Peterson said the projections were equivalent to "30 or 40 IMAX screens positioned in different angles".

"No matter where you're standing if you look to a different area you'll see something different and you'll get a very unique experience in Sydney," Mr Peterson said.

"Young kids tend to chase the colours and movement of light and colour around. They can get a taste for art and culture early on that's positive, that's not dry or boring, that's no less enticing as their computer screens and iPads."

The exhibition marks another milestone as Sydney's cultural scene gradually comes back to life and also celebrates the renewed availability of the Royal Hall of Industries.

The Sydney Swans were awarded a 27-year lease for the historic venue in 2018 and had plans to turn the building into the AFL club's new headquarters. However the pandemic took a heavy toll on the clubs finances, forcing the Swans to scrap their plans and relinquish the lease. Playbill Venues, which secured the lease for neighbouring Hordern Pavilion, has taken over management of the Royal Hall of Industries.

"As long as government regulations and everything else holds, it'll be fantastic to have something on that's cultural, educational entertaining for all members of the family," Mr Peterson said.

"The type of experience we put on is about as COVID-friendly as you can get — it's contactless and people can socially distance themselves and we can control things quite well."

Mr Peterson said the pandemic had caused chaos for his business which runs exhibitions around the world. He realised his team, based in Melbourne, would not be able to travel overseas for the foreseeable future.

Instead, they drew up 150-page manuals to walk foreign contractors through the steps of installing and removing the displays. The installations are then fully controlled from Melbourne where the creative production team can work remotely.