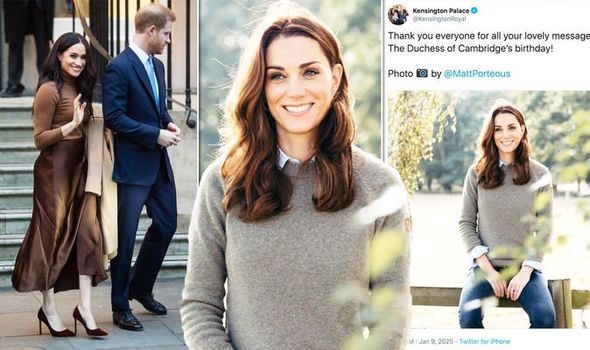 A photograph of Kate Middleton, taken by photographer Matt Porteous, has been released on Twitter to honour her birthday. The image was tweeted with the message: “Thank you everyone for all your lovely messages on The Duchess of Cambridge’s birthday!”

Comments piled in praising the Duchess of Cambridge.

One said: “Aww what a beautiful new picture!!! Thank you for this and happy birthday Catherine.”

“What a wonderful photo, and many happy returns to HRH!” another said.

“A truly classy lady Happy Birthday have an amazing day,” one more wrote. 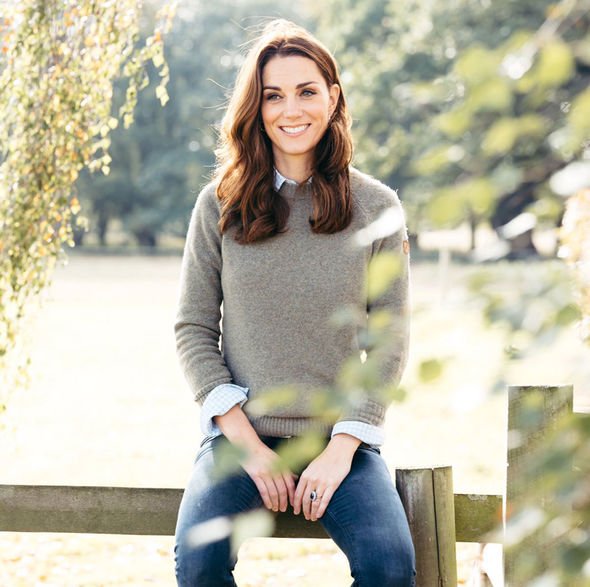 The image showed a casual looking Kate, dressed down in jeans and a grey jumper.

A pale blue gingham shirt could be seen popping out from her sweater.

If it weren’t for Kate’s enormous sapphire ring, once Princess Diana’s engagement ring, she could look like any other British woman enjoying a day in the country.

The image is among those taken for the Cambridges’ Christmas card. The jumper is from Fjällräven, and she wore Asprey Oak leaf earrings.

How did Kate Middleton become a royal?

Kate Middleton, or Catherine, Duchess of Cambridge, was born on 9 January 1982 at the Royal Berkshire Hospital, Reading, England.

She was born to Michael and Carole Middleton, a former flight dispatcher and air hostess. The couple founded a party supplies company, Party Pieces, in 1987 – now estimated to be worth £30 million.

Kate has a younger sister Pippa Matthews, 34, and a younger brother James Middleton, 31.

Kate and her family moved to Amman, Jordan, in 1984, where the future Duchess was educated at an English-speaking nursery school.

After moving back to Berkshire the family sent Kate to private school, St Andrews School. She went on to briefly study at Downe House before moving onto Marlborough College where she boarded.

For university the young Kate attended the University of St Andrews in Fife, Scotland. Here she was awarded an undergraduate MA (2:1 Hons) in history of art.

Kate met Prince William when they were both studying at St Andrews, and both living in St Salvator’s Hall. Famously, William reportedly took a fancy to Kate after she wore a see-through dress during a fashion show.

In 2003 the couple began dating and lived together during their second year of university.

The couple split in April 2007, however, in October they were back together.

Prince William proposed to Kate Middleton with his late mother Princess Diana’s engagement ring in October 2010. The couple were holidaying in Kenya at the time.

On 29 April 2011 they married at Westminster Abbey with a whopping 26 million watching the event live.

Kate wore an Alexander McQueen dress worth a reported £250,000 on the big day.