STEPHEN GLOVER: Truly, Rishi Sunak has seized his moment. No 10? Yes, I do believe that his time will come

William Gladstone’s first Budget speech as Chancellor of the Exchequer in 1853 lasted nearly five hours, and cemented his political reputation. He laid the ground for tax and tariff reductions which boosted the British economy.

Whether Mr Sunak follows Gladstone’s eventual path to No 10 remains to be seen. But there is little doubt that his performance greatly enhanced his standing. His package was daring and innovative.

Let’s face it: the Government hasn’t had a glorious pandemic. Health Secretary Matt Hancock has presided over a fiasco both in care homes and in testing. His defence, which is not nugatory, is that he has been wrestling with the slow-footedness and incompetence of Public Health England and the Department of Health.

As for Boris Johnson, he was slow to appreciate the enormity of Covid-19 in late February and early March. Then he was grievously stricken by the virus, and took several weeks to recover. 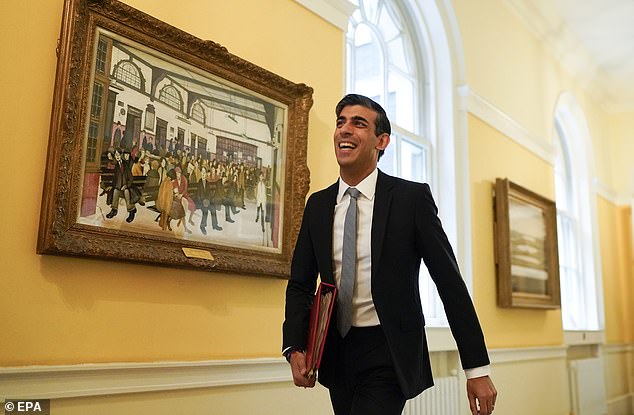 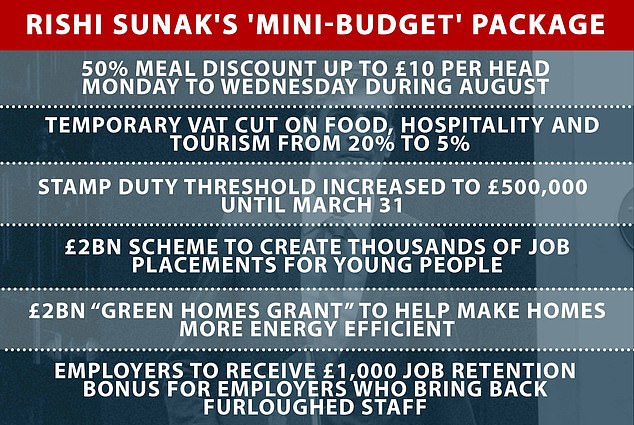 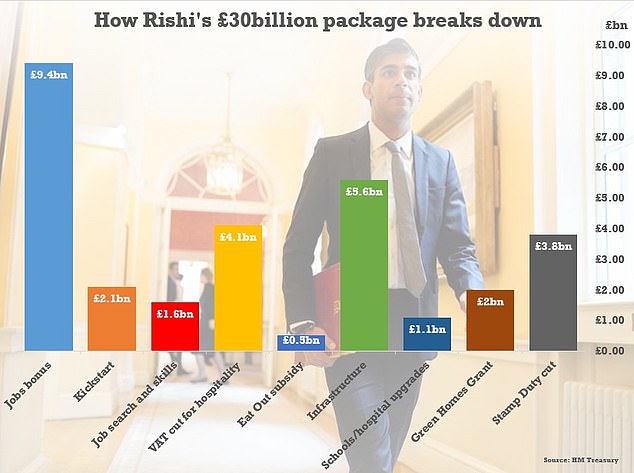 Even so, he has continued to resemble a radio which is not quite perfectly tuned in. His apparent suggestion on Monday that care homes had increased infection rates by failing to follow correct procedures is a case in point. He should either have said nothing, or been more precise in his language.

Yesterday at Prime Minister’s Question Time, there was much quoting of figures by Mr Johnson, some of which sounded not quite right, as well as breezy undertakings and an energetic flailing of arms.

Then came Mr Sunak’s turn — the calm after the storm. Following weeks during which few other ministers have distinguished themselves, his clear and serious-minded statement was a relief. No wonder the Chancellor was head boy of his school.

It’s extraordinary to think that this inexperienced 40-year-old first became a junior minister only two-and-a-half years ago. He was parachuted into No 11 in mid-February after its then occupant, Sajid Javid, refused to accept onerous terms demanded by the PM and his powerful sidekick Dominic Cummings.

Maybe when he goes home to his wife, the daughter of an Indian billionaire, Rishi is a bundle of nerves — which couldn’t be soothed by a stiff drink because he is teetotal. But throughout this crisis he has come across as undaunted by the enormity of the economic challenges facing the country.

At the beginning of the pandemic, he calmly and speedily put in place measures costing some £160 billion in order to protect people’s jobs, incomes and businesses. These are scary sums.

Yesterday’s package to save and create jobs as the furlough scheme winds down will notch up a further £30 billion. The overall bill for the taxpayer — this is borrowed money which will have to be repaid — could exceed £300 billion. If there is a second wave, the sums will climb even higher. 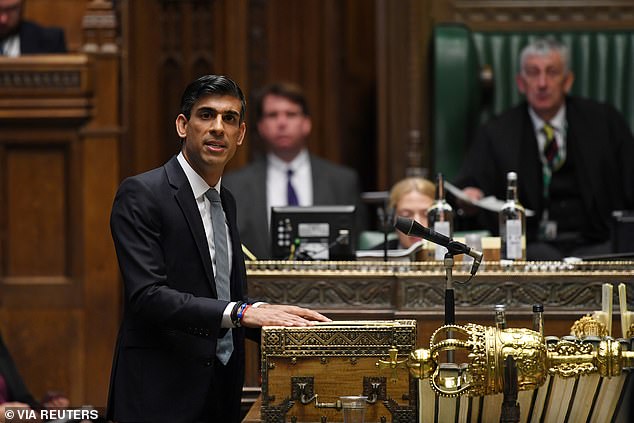 None of this appears to faze the unruffled Mr Sunak. Although he conceded that ‘over the medium-term, we must, and we will, put our public finances back on a sustainable footing,’ for the moment he is throwing caution to the wind.

Among the most imaginative measures, which were more comprehensive than leaks had suggested, was the payment to firms of a £1,000 bonus for every staff member kept on for three months when the furlough scheme ends in October.

Maybe some unscrupulous companies will claim for staff they would have kept on anyway. But the Chancellor is in the desperate position of a doctor trying to bring a patient back to life. He will try any remedy within his grasp in his life-and-death mission.

Other welcome policies include the £2 billion ‘kickstart scheme’ to create more jobs for young people, a stamp duty exemption on the first £500,000 of all property sales, and a reduction in VAT from 20 to 5 per cent on food in restaurants, pubs or cafes, accommodation and tourist attractions.

Inevitably there will be economists who will argue he should have given this lever a bigger pull, and that one less of a yank. But with these huge amounts of public money being sprayed about in all directions, it makes no sense for Labour to allege that he is being tight-fisted.

So I’m afraid the grudging response of the Shadow Chancellor, Anneliese Dodds, that Mr Sunak should have dug even deeper into the nation’s pockets verged on the ludicrous. A sensible person offered a bigger present than expected does not demand an even larger one. This was opposition for opposition’s sake.

No, Mr Sunak did everything that could have been asked of him. After all the errors, slippery statements and disappointments of the past few months, how cheering it was to have a Chancellor who seemed judicious and humane. Someone who appears equal to the magnitude of the dangers facing this country.

So I am sure that many Tory MPs, and some voters, are already wondering whether this impressive, clued-up character might not make a more dependable national leader than Boris Johnson.

I recommend caution. After all, as Mr Sunak said yesterday, his ‘job has only just begun’. Whereas the Prime Minister’s and Mr Hancock’s failings and relatively few successes during the pandemic have been almost instantly observable, no one can yet say how the Chancellor’s policies will turn out.

If, in 12 or 18 months’ time, we have higher-than-feared unemployment or soaring inflation, policies which seem audacious today will be judged ineffective or reckless, and Mr Sunak will no longer be flavour of the month.

And while it is sometimes hard not to be exasperated by Boris’s bluster and broad-brush approach, we shouldn’t forget that it was above all his qualities which secured such a remarkable victory for the Tories last December.

Moreover, he encouraged Mr Sunak, and finally promoted him to his current job, no doubt in the knowledge that he is a brainbox with a far better grasp of economics than he himself possesses. That suggests good leadership qualities on Boris’s part. 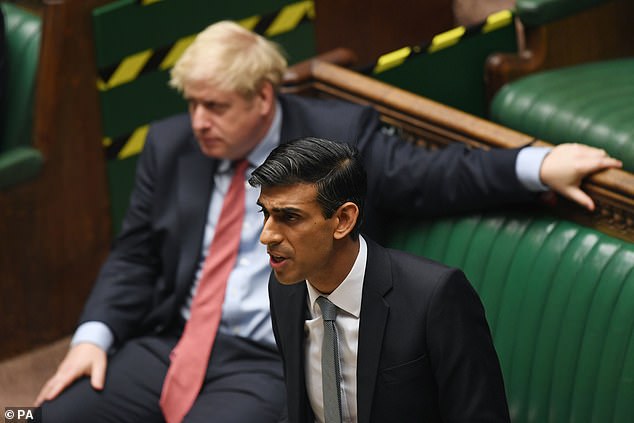 Is he jealous of the younger man? He wouldn’t be human if he wasn’t. When Mr Sunak started speaking yesterday, Mr Johnson looked disconsolate, possibly because he had just been crossing swords violently with Sir Keir Starmer during Prime Minister’s Question Time.

But, as time went on, he began to cheer up, and smiled and burbled encouragingly as the Chancellor progressed. He has a generous soul, and is probably proud, as well as relieved, to have such a competent man in the job.

Maybe we have a duo here which will work. I hope so. The past few months have been depressing for Tory supporters. Many fear the Cabinet is pretty threadbare. Well, at least we have Rishi.

No one can say whether he will be Prime Minister in three years or five or ten. But I have a feeling that, unless the Tories manage to blow themselves up in a spectacular way, his time will come.

This is how Mr Sunak ended his speech: ‘Governments, much less people, rarely choose the moments that define them.’ After yesterday, few can doubt that this formidable young Chancellor has decisively seized his moment.