STEPHEN GLOVER: A calamitous, hurried U-turn and why I now have an inkling of what it must be like to live in a dictatorship

The chaotic and haphazard way in which a new lockdown was announced on Saturday evening symbolised Boris Johnson’s disorganised approach to the pandemic over the past eight months.

They spoke first. Unaccountable scientists are running the show again.

Some of their graphs were barely intelligible, not least because they were in such small type that they were hard to decipher even on a large television screen. 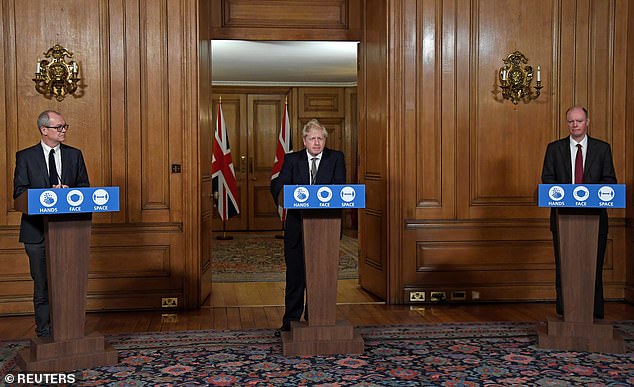 They were often speculative and occasionally contradictory.

For example, one chart suggested that 2,000 people a day might die by early December if nothing is done. Or it could be 4,000. It doesn’t really matter. Project Fear is back.

Boris himself had none of the statesmanlike gravitas with which he introduced the first lockdown on March 23.

He rattled though his spiel as though anxious to get the thing over.

There was little consideration of the huge social cost, no apparent awareness of the economic catastrophe his measures will entail.

If he seemed poorly prepared for the occasion, it was probably because he had been bounced by a leak into an early announcement.

Doesn’t that say all we need to know about this amateurish, muddled administration, whose motto might as well be ‘we U-turn whenever we want to’?

For this was the U-turn to end all U-turns, executed without a trace of apology.

Less than two weeks ago, the Prime Minister accused Sir Keir Starmer of wanting to ‘turn the lights out’ with his idea of a two-week ‘circuit-breaker’.

Now he is going much further than the Labour leader proposed.

Days were recently spent haggling with local leaders such as Andy Burnham, Mayor of Greater Manchester, about the terms of entering Tier Three restrictions, which are much less onerous than the measures unveiled on Saturday. 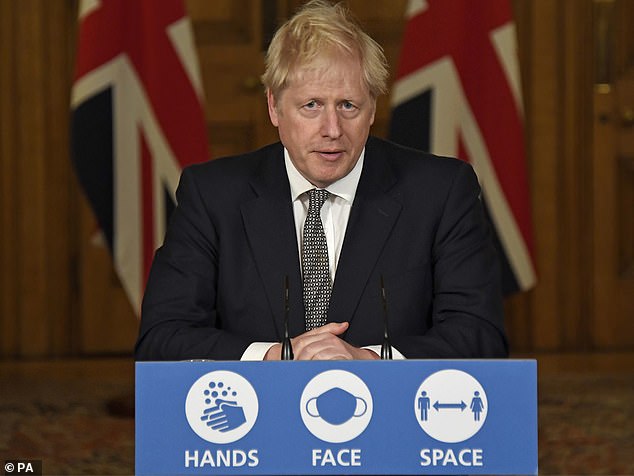 Less than two weeks ago, the Prime Minister accused Sir Keir Starmer of wanting to ‘turn the lights out’ with his idea of a two-week ‘circuit-breaker’

And then suddenly — bang! — everything changes in a flash, apparently as a result of scary ‘scientific evidence’ presented to Boris Johnson, Chancellor Rishi Sunak, Health Secretary Matt Hancock and Cabinet Office Minister Michael Gove during a meeting on Friday.

Although Mr Sunak is said to have been unconvinced, the decision was made to reverse the policy followed during recent weeks after bloodcurdling projections from the Government’s scientific body Sage.

Why were ministers surprised by these forecasts?

The fact is that the wider Cabinet was sidelined, and Parliament’s agreement taken for granted.

And so the livelihoods of millions are threatened.

Most shops, pubs, cafes, restaurants, churches, gyms and much else are summarily shut down, and our liberties again curtailed — all on the basis of questionable advice, and ordered by a group of men changing their minds in a hurry.

For the first time in my life, I have an inkling of what it must be like to live in a dictatorship.

But the extraordinary thing about our own little band of home-grown autocrats is their incompetence. This is no way to govern a country.

For Boris Johnson is leading us down a path which by his own admission will end in calamity. On September 16, he told a Commons committee that he ‘didn’t want a second lockdown’.

He added: ‘I very much doubt that the financial consequences would be anything but disastrous’.

If he thought seven weeks ago that a lockdown would almost certainly be disastrous, he presumably does so now. Or does he?

We never know where we are with this chop-and-change Prime Minister, who seems to have lost all faith in his own judgment.

He was right in September, of course. Another lockdown will be an economic disaster.

According to Professor Douglas McWilliams, deputy chairman of the Centre for Economics and Business Research, the four-week lockdown could cost the economy £1.8 billion a day. 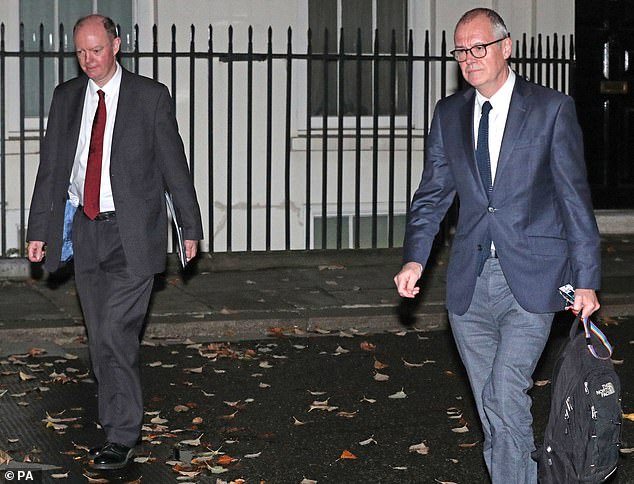 Even though the furlough scheme will be extended for another month at an estimated cost to the taxpayer of £7 billion, there are bound to be many more job losses, and countless more bankrupted businesses as a result of the lockdown.

And there’s no certainty it will end on December 2. Michael Gove — a leading proponent of tougher measures — conceded yesterday that the national lockdown might last longer.

Even if it is lifted after four weeks, large parts of the country will almost certainly be forced to observe arduous restrictions.

So the outlook is bleak, and what makes it bleaker still is the sense that ministers in charge of battling the pandemic can’t be relied upon to behave in a rational and consistent manner.

Needless to say, they mostly avoid debate as they lay down the law. Neither Boris Johnson nor his two scientific minders said on Saturday, or on any occasion I can recall, that Covid-19 is overwhelmingly a disease that targets the elderly.

According to a recent study, the average age of people who have died from Covid-19 in England and Wales is 82.4.

By comparison, the average age of those dying of non-Covid causes since the pandemic began is 81.5.

And although it’s true that infection rates have been climbing in recent weeks (as, I should say, I predicted in these pages) there’s no evidence that figures are spiralling out of control in the dramatic fashion outlined by Messrs Vallance and Whitty.

And yet on October 30, nine days later, it had slipped back to 24,405. Hardly the ‘exponential’ increase which some scientists love to speak of while trying to make our flesh creep.

As for Covid-related deaths, they have been going up quite rapidly, but not stratospherically. The daily toll announced on October 20 was 241.

On October 30 it was 274, and by October 31 it had climbed to 326. By yesterday it had fallen to 162, though figures over the weekend are lower because of poor reporting.

I expect the upward curve will resume next week, but not in a way that justifies the alarmist rhetoric of Sir Patrick Vallance and Chris Whitty — or the panicky U-turn of Boris Johnson, egged on by Matt Hancock and Michael Gove (and, I’m told, by that professional iconoclast Dominic Cummings).

What on earth has happened to Boris? He is so adrift from his own natural instincts that he allows himself to be bullied by over-excited scientists, and to adopt a policy which he only recently declared would be near catastrophic.

I wish I had confidence that the four-week lockdown — assuming it is approved by Parliament on Wednesday, as it surely will be with Labour support — will allow the Government to improve our abominable test-and-trace system. I’m afraid I don’t.

The sad truth is that we have a quixotic, nervous leadership which is far from competent and shows increasing signs of dictatorial tendencies.

We British are law-abiding people, but I don’t think Boris Johnson should count on our meek compliance for ever.