Directors’ forewords in exhibition catalogues are usually perfunctory affairs but there was one line in Michael Brand’s comments in the Japan Supernatural volume that caught my eye. The Art Gallery of NSW director thanked Louise Neri of Gagosian Gallery, New York, for accompanying him on a first visit to Takashi Murakami’s Tokyo studio. Considering that the gallery went on to commission a massive painting from Murakami for a seven figure sum, this may be carrying courtesy a little too far. Surely the dealer should be thanking him!

It’s tacitly accepted by everybody that big international dealers such as Gagosian are the most powerful forces in world art nowadays, but that doesn’t necessarily mean our only option is to buy ultra-expensive works by ultra-hyped artists. The Murakami is the kind of purchase that makes us look like provincial fashion victims, ready to follow where the dealers lead. 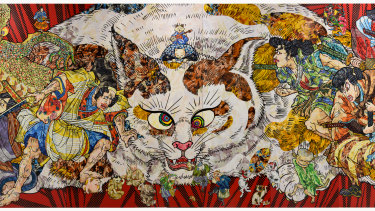 Detail of Takashi Murakami’s painting Japan Supernatural: Vertiginous After Staring at the Empty World Too Intensely, I Found Myself Trapped in the Realm of Lurking Ghosts and Monsters, 2019.Credit:Kaikai Kiki Co Ltd. All Rights Reserved

The only justification would be if Murakami’s painting was an indisputable masterpiece. Instead, at 10 by 3 metres, it’s just big. Even the title is big: Japan Supernatural: Vertiginous After Staring at the Empty World Too Intensely, I Found Myself Trapped in the Realm of Lurking Ghosts and Monsters. Yet despite its vast size the idea behind the work is small. It’s as if Murakami flicked through a book of ukiyo-e prints and said to his team: “Take the cat from page 152 and stick in it the middle, then grab a bunch of samurai from page 166 and arrange them on each side.”

The heroic scale of the work seems less impressive when one realises Murakami employs hundreds of assistants. The composition is hardly more than a mash-up, and even then manages to be dully symmetrical. The paintwork is flat, although this is presumably by choice. It’s still more appealing than the 25 by 3 metre In the Land of the Dead, Stepping on the Tail of a Rainbow (2014), which has been borrowed for the exhibition. This huge, lurid work is rapidly turning into Sydney’s new selfie central.

So much for the elephant-sized painting in the room. It would be a shame if viewers attracted by the Murakami hype are not willing to devote serious time to the rest of Japan Supernatural, which is predominantly an exhibition of paintings and prints from the 1700s to the present. 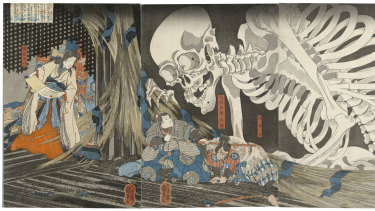 Detail from Utagawa Kuniyoshi’s Mitsukuni defies the skeleton spectre conjured up by Princess Takiyasha (1845–46)Credit:Trustees of the British Museum

The most engaging contemporary pieces are Miwa Yanagi’s twisted fairy-tales and Fuyuko Matsui’s elegant, macabre images of death and decay, but it is the older works that give the show its substance.

One suspects it was the ukiyo-e prints by artists such as Kuniyoshi, Yoshitoshi, Hokusai and Kunisada that inspired curator, Melanie Eastburn, when she came up with the idea for this show. Another key work is Toriyama Sekein’s scroll painting, Night procession of the hundred demons (1772-81) – a virtual catalogue of supernatural beings that would inspire generations of artists. This is an exceptional loan from the Boston Museum of Fine Arts.

The exhibition introduces us to a large cast of Yokai and Yurei that have haunted the Japanese imagination for centuries. Yurei means “ghost”, and as writers such as Donald Richie have explained, in Japan ghosts are usually female and almost always motivated by extraordinary passion. 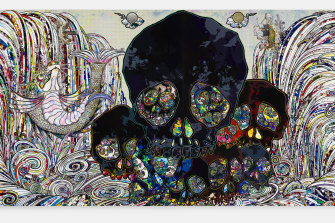 Takashi Murakami’s In the Land of the Dead, Stepping on the Tail of a Rainbow, 2014.Credit:The Broad Art Foundation, Los Angeles. 2014, © Takashi Murakami/Kaikai Kiki Co Ltd. All Rights Reserved

Yokai is a term that embraces those beings we call demons, ghouls, trolls or monsters, as well as a range of paranormal phenomena. Most have counterparts in European mythology but there is an idiosyncratic local aspect to creatures such as the Kappa – a frog-like demon that lives in creeks and rivers, and likes to challenge passers-by to wrestling matches; or the Rokurokubi, a woman with a long, serpentine neck that hunts by night.

The Murakami is the kind of purchase that makes us look like provincial fashion victims, ready to follow where the dealers lead.

The folk roots of these beliefs are revealed by the leading role played by foxes, badgers, cats and other animals. The influence of the Shinto religion, which believes that everything has a soul, is found in the Tsukumogami – translated as “object goblin” – an old, discarded object that comes to life after a hundred years. 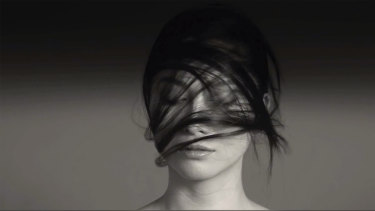 The catalogue essays emphasise the profoundly superstitious nature of Japanese culture, which clings to its belief in ghosts and evil spirits even though it is one of the most advanced civilisations in the world. It’s an expression of those weird, disturbing undercurrents in Japan which may be a natural reaction to the prevailing social conformity.

A taste for cruelty and violence may be found everywhere in contemporary manga and anime, along with an endless supply of cute, big-eyed cartoon characters. In some cases – the so-called Otaku culture – this constitutes an alternative reality, a fantasy world one may inhabit without ever leaving home.

The show doesn’t need Murakami to underline the links between the ukiyo-e prints, which were an inexpensive, popular artform, and today’s pop culture. In the earlier works there were already powerful, grotesque images such as Utagawa Kuniyoshi’s Mitsukuni defies the skeleton spectre conjured up by Princess Takiyasha (1845-46), which wraps around the cover of the catalogue. This scene in which a samurai is menaced by towering skeleton looks like it was designed for an animated film.

Other works, such as Tsukioka Yoshitoshi’s The lonely old house at Adachigahara in Ōshū (1885), in which a bound and gagged, half-naked, pregnant woman is suspended from the ceiling behind an old hag who is sharpening a big knife, is an out-and-out horror show. It’s unlikely that anybody would have hung this picture on the wall – it’s something for sadists to peer at in private.

The print that stirred most controversy at first appearance wasn’t especially nasty. Kuniyoshi’s The earth spider conjures up demons at the mansion of the regent Minamoto no Yorimitsu (c.1843), was viewed as a coded piece of political subversion, the “demons” representing the common people in revolt against their aristocratic rulers.

What distinguishes all these prints is the high level of skill involved, from the quality of the drawing to the sophistication of composition and printing techniques. The subject matter may be bizarre and sensational, but each work repays the closest study. By the 19th century there was nothing primitive about Japanese popular culture. The folk elements had been sifted into a familiar set of stories and characters that appeared in prints and in forms of drama such as Noh and Kabuki. Regardless of what audiences truly believed it is the theatrical element that comes through so strongly – the frisson of the supernatural that still sells books and movies today. It was a gleeful plunge into the darkness of the human imagination, a part of the psyche where our own demons make their home.

Japan Supernatural: Ghosts, Goblins and Monsters 1700s to Now is at the Art Gallery of NSW until March 8.