The main component of the government's specialist medical costs website will be delayed until at least the end of next year, with specialists on notice they may be compelled to disclose their fees if too few volunteer the information.

The fee transparency website has been criticised by both patient and doctor groups, which argue it will not end bill shock for patients. 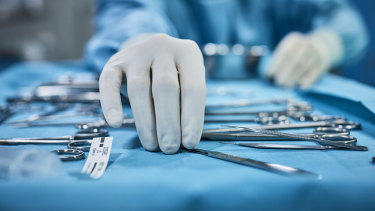 The government will consider forcing specialists to provide their fees if too few volunteer the information.Credit:iStock

Health Department secretary Professor Brendan Murphy told Senate estimates late on Monday progress on the government's specialist fee transparency website, to which the government has just committed an extra $17.1 million in funding, had been "put on ice" due to the pandemic.

"We hoped to have greater progress on the individual fee website before now but because of COVID of course that's been delayed," he said.

The existing version of the Medical Costs Finder website shows average out-of-pocket costs for some services based on a person's location. Since the site's launch in December 2019, it has had 19,134 unique visitors.

Professor Murphy said he hoped the specialist fee data would be available by the end of 2021.

That fee disclosure relies on specialists volunteering their pricing information.

Earlier this month, Australian Patients Association chief executive Stephen Mason said he would be surprised if any additional specialists would "voluntarily agree to sign up to list their fees".

Health Department deputy secretary Penny Shakespeare said if more doctors and specialists did not volunteer the information, the department would consider whether it should be made mandatory.

Professor Murphy said Health Minister Greg Hunt would prefer to work with the medical profession on volunteering their fees, but the department was also "determined to make it work".

The delay comes as it was revealed Mr Hunt declined to reject private health insurance premium increases for 2020 after negotiations with insurers, despite many families facing hardship due to the coronavirus recession.

Private health insurance premiums increased by an average of 2.92 per cent on October 1 – the lowest average premium increase in 19 years – after a six-month delay because of COVID-19.

On Monday night, Labor senator Malarndirri McCarthy asked why Mr Hunt did not exercise his right under the 2007 Private Health Insurance Act to reject premium increases where they were against the public interest.

Ms Shakespeare said the premium increases were approved after discussions between the government and insurers as well as their peak bodies.

"In some cases, insurers reduced those [premium increases] before they were accepted," she said.

In one case, health insurer HBF decided not to increase premiums in 2020.

Ms Shakespeare said it was estimated that COVID-19 measures, including the delay in premium increases, returned $500 million to members.

She also confirmed private health cover has fallen to 43.6 per cent, according to the most recent data to June, the lowest rate since 2006.

Get our Coronavirus Update newsletter for the day’s crucial developments at a glance, the numbers you need to know and what our readers are saying. Sign up to The Sydney Morning Herald’s newsletter here and The Age’s here.