Former Labor frontbencher Joel Fitzgibbon says the opposition won't win the next election unless his colleagues "get on their bikes" and visit workers at coal mines, gas plants and factories across suburban and regional Australia.

In a speech to the Sydney Institute on Wednesday, the veteran MP said the "irrational" reaction from those within his party towards him after suggesting the Opposition reach a political settlement with the Morrison government has only strengthened his resolve. 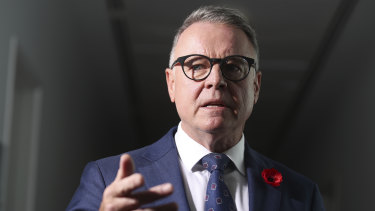 Mr Fitzgibbon said no political party was being honest with the Australian public about reducing greenhouse gas emissions and Prime Minister Scott Morrison had no need to end the climate wars because they had helped the Coalition to three successive wins.

But Labor leader Anthony Albanese has again rejected Mr Fitzgibbon's proposal, saying on Wednesday, "Labor will determine Labor's policy that we take to the next election, not Scott Morrison".

At the same venue where he proposed Labor offer "a political and policy settlement to make 28 percent the target by 2030", Mr Fitzgibbon said debate within his own party had meant the government was getting away without scrutiny.

"What was a little surprising was the political Left's disproportionately critical response to my speech; a reaction best described as 'shrill, ideological, elitist, out-of-touch, and irrational'," he said.

"You'd swear I'd asked not a rational question but rather, I'd advocated a return to the steam engine. Or worse, a doubling of the tax imposed on chardonnay."

He said climate change could learn from the COVID-19 threat, where both the government and the opposition "stick like glue" to the expert advice.

He also took a swipe at colleague Mark Butler, the Opposition's climate change spokesman, saying his claim it would take 146 years for Australia reach net zero emissions was "no more believable than Scott Morrison’s claim he is on track to meet his current medium-term target".

"And it's no more believable than anything the Greens have to say on the issue, the National Party for that matter," he said.

"This is the problem with the climate change debate, no one is being honest with the Australian people. That's because honesty would come at the cost of perceived political advantage. Scott Morrison certainly doesn't want an end to the climate wars, they've helped the Coalition win the last three elections."

He said for that reason alone Labor should commit to whatever medium-term targets Mr Morrison commits the Australian people to and re-commit to net zero emissions by 2050.

A Labor government could then promise to accelerate the pace of the innovation needed to achieve the mid-century goal, he said.

Mr Fitzgibbon, who stood down from shadow cabinet last month, warned the party was at risk of losing its blue-collar voting base.

"Our most senior MPs and senators need to get on their bikes," he said. "They must visit our coal mines, gas projects, manufacturing plants, maintenance sheds and the like, to tell the workforce that they should be proud of what they do because we sure are. We have a lot of work to do yet before we can claim we've put the labour back into the Labor Party."

He said Labor must be "louder and prouder" in its support for those who work in industries to "earn the export income we need to pay for the imports we are so fond of".

"We must leave voters in no doubt, that we believe in rewarding hard work and in backing aspiration. Just as much as we believe in making sure no one need be left behind," he said.