Prime Minister Scott Morrison is poised to elevate the aged care portfolio into cabinet and tailor his frontbench towards post-pandemic economic recovery in the first reshuffle since last year’s election win.

Victorian MP Dan Tehan is widely expected to be shifted from education to trade and investment in a move which will give him responsibility for mending sour relations with China, the nation’s biggest trading partner, which have deteriorated over the past year. 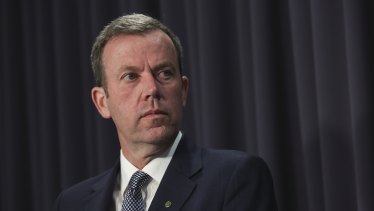 Education Minister Dan Tehan could be moved to the trade portfolio in a minsterial reshuffle expected to be announced on Friday.Credit:Alex Ellinghausen

Mr Morrison’s priorities have been firmly focused on trade, tourism, employment, skills, training and aged care portfolios, which are viewed as central to his government’s economic recovery from the coronavirus pandemic.

He said on Thursday he would take a “bit of a break” during the New Year holiday period and confirmed Nationals leader and Deputy Prime Minister Michael McCormack would “step up for a week over the January period”.

“And we’ll recharge the batteries, but we won’t be far away,” he told Sydney radio. “I’ll just be spending the time at home and hopefully get a bit of time down the South Coast if events allow; we’re keeping a close eye on these serious weather events up here up north with La Nina.”

It remains unclear whether Aged Care Minister Richard Colbeck will retain an involvement in the portfolio in a junior ministry but ultimate responsibility is likely to rest with a current member of cabinet, potentially Health Minister Greg Hunt or Government Services Minister Stuart Robert.

Aged Care Minister Richard Colbeck, who faced fierce criticism for policy failings during the pandemic – particularly in Victoria – confirmed he had met with Mr Morrison earlier this week and said he was “keen to continue in the role”.

Home Affairs Minister Peter Dutton, Defence Minister Linda Reynolds and Foreign Minister Marise Payne will remain in their portfolios despite speculation of wider changes by Mr Morrison who is expected to announce the new ministry on Friday.

One scenario discussed within government was giving Employment, Skills, Small and Family Business Minister Michaelia Cash a super porfolio which included parts of education to better link it with employment outcomes.

The future of David Coleman, who stood aside from the immigration portfolio more than 12 months ago for personal reasons, is expected to become clear following Mr Morrison’s announcement.

Senior government sources said Mr Morrison was also weighing up several significant changes to the public service in the coming months, with diplomat Frances Adamson expected to leave her job as the secretary of the Department of Foreign Affairs and Trade.