Sally Smart was four or five when she first heard stories of her great-aunt, Bessie Davidson. They were inspiring tales of a committed young artist who left behind the conservatism of early 1900s Adelaide to pursue her passion in Paris. 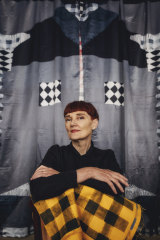 “I always wanted to be in Paris or New York and to be an artist,’’ Smart says. ‘‘It was great in my family to know there was such a thing, to be an artist; that it was possible. Bessie Davidson was very powerful in that discourse, essential.’’

This month, the two women – who never met – come together in a joint exhibition at Bendigo Art Gallery. Bessie Davidson & Sally Smart – Two artists and the Parisian avant-garde combines Davidson’s still-life, portrait and landscape paintings with Smart’s contemporary responses to her pioneering relative.

Smart wanted her own works, which include a two-channel video work and several fabric-based installations, to tell the story of Davidson’s life in a contemporary but personal way. “I wanted a lived bodily experience to be brought into the work so that it would almost be like bringing something to life,” she says. 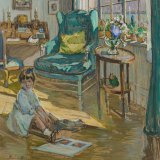 When Davidson travelled to Europe in 1904, she went with her mentor, painter Margaret Preston. Davidson’s father approved the trip only on condition that they go to Munich, not Paris. He was, the story goes, concerned about the morality of French men. Little did he know his daughter would end up spending most of her life in Paris.

Germany, it turned out, was disappointing for the ambitious young artists, who found few openings there for women. They stayed briefly, then hot-footed it for the opportunities and pleasures of the French capital. Mr Davidson, after all, was thousands of kilometres away in conservative Adelaide. Within a year of their arrival, Davidson and Preston each had works selected for the “Old Salon” (the Salon des Artistes Francais).

More than half a century later, Australian relatives travelled to Paris to visit the now established and committed artist. Among them was a niece who in 1960 would give birth to the girl who would follow in her footsteps to become one of Australia’s finest artists.

Smart, as a child, knew of Davidson as a person who had firmly established herself within the artistic milieu of Montparnasse, and as a highly creative and courageous woman.

Their joint exhibition opens later this month in the carefully configured spaces of Bendigo Art Gallery’s newest wing. The Davidson segment charts her development, most prominently as a post-Impressionist. Smart’s installations in surrounding wedge-shaped spaces are a beautifully constructed response to the interests and ideas Davidson explored during her lifetime (she died in 1965), yet they also unmistakably bear the idiosyncratic vibrancy that identifies Smart’s work.

At her inner-Melbourne studio, Smart has been investigating Davidson’s output for several years. The project, which has had a long gestation, arises out of the gallery’s continuing commitment to exploring the work of overlooked Australian women artists of the late 19th/early 20th centuries, including Agnes Goodsir, Hilda Rix Nicholas, Ethel Carrick Fox and, now, Davidson. 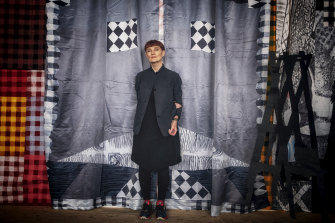 Smart’s studio is brimming with visual experiments around her ideas – embroidered fabric composites, mock-ups of installations featuring lengths of gingham and checked materials, cut-out silhouettes of furniture and, overall, an atmosphere that is testimony to her deep research into the origins and inspirations that had a bearing on Davidson’s work.

Theatre, dance and influences as disparate as Indonesian puppetry and the costumes of the Ballets Russes, the Paris-based but mostly Russian avant-garde dance group, have a strong focus in this creative conversation between the two artists. In particular, Smart uses gingham as a motif in her responses.

Smart, who grew up in rural South Australia, says: ‘‘I was always designated the artist within the family, because I was showing signs.’’ Davidson was held up as an example of what you could do: go to Paris and be an artist. Gradually, Smart made this happen for herself and now, inspired by Davidson’s example, she is a committed advocate for other women artists. She says mentors and leadership were important to her, and to others. ‘‘They [Davidson and Preston] were very brave artists,’’ she says. ‘‘It was incredible how mobile and dynamic they were.”

It’s no surprise, then, that Smart has recently featured in the National Gallery of Australia’s Know My Name campaign, showcasing the work of Australian women artists. She has exhibited widely over many years, and one of her most recent successes was The Violet Ballet, a centrepiece of last year’s Adelaide Festival. Audiences familiar with that work will see its echoes in the new installations surrounding Davidson’s paintings and will find themselves drawn into Smart’s poetic responses. 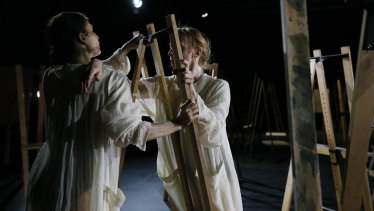 Her video work engages audiences with two dancers, Deanne Butterworth and Jo Lloyd, in a way that reflects the interiors of Davidson’s paintings, evoking an emotionally charged atmosphere. The dancers, in extraordinary costumes, move through draped fabrics and a room full of artists’ easels. The architectural spaces, textures and spirit of the work bring Smart and Davidson into the same space. 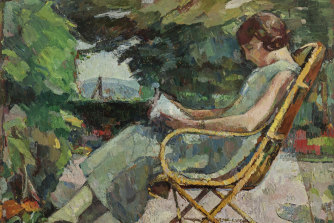 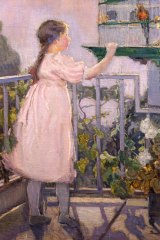 Bendigo Art Gallery curator Tansy Curtin says the work of artists such as Davidson constitutes an area of art history that still needs a huge amount of scholarship. While male artists of that era were busy “nation-building” and forging “an Australian identity”, other significant things were overlooked at the time, she says. One was, of course, the many thousands of years of art produced by indigenous Australians; the other was a cohort of women artists working here and abroad. Curtin notes that those female artists who engaged in a more international or global approach – rather than “Australian identity”, predicated on the landscape – have been sidelined from the dominant art-history narrative. She points out that the last exhibition devoted to Davidson was held in 1967 at Osborne Gallery in Adelaide.

Curtin describes Davidson as very avant-garde – a woman who, while from a wealthy family, was able to leave Australia, stay in Paris, have a life-partner (Marguerite Le Roy, known as Dauphine) and support herself practising what was considered the acceptable female artistic province (domestic interiors, portraits, still-lives).

“She lived this amazing courageous life in Paris which would have been unheard of in Adelaide, where she would have been expected to marry and have children and lead the very traditional everyday life that was expected of women at that time,” Curtin says.

Davidson held a “salon” afternoon at her studio every Monday and, Curtin writes in her essay for the exhibition, was significant as a strong leader in the female artistic community and a long-time secretary of the organisation Societe des Femmes Artistes Modernes (a key support network for female artists). She also received the highest honour conferred by the French Government, being named a Chevalier de la Legion d’Honneur in 1931.

Davidson left behind a wealth of secondary materials for historians to investigate, but not many primary resources, Curtin says. “The people who knew Bessie Davidson so intimately were French, not Australian. Those were her people and to whom she left everything in her will. What the paintings leave us with is knowledge of her life in Paris.”