What with the stabbings, the agonising deaths from consumption and the hours-long run times in foreign languages, you wouldn't think opera has much to offer a baby. If it did, it would be a worry.

But here's a five-month-old boy, his mouth open in what passes for concentration, his eyes following intently as Victorian Opera singers perform the Flower Duet from Leo Delibes' Lakmé. 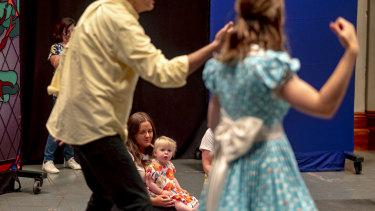 VO's new music program, based on similar experiments overseas and heavily workshopped last year, is for babies and toddlers, as well as older children. They have deliberately not set a lower age limit, even if some audience members have no idea who they are yet, let alone La Traviata.

Yet the children sat entranced by the Libiamo duet, whose original lyrics in Italian recommend drinking in "the sweet thrills that love arouses" rather than, say, milk.

"It became quite evident we were lacking something for the littlest members of our community, so we tried to develop a program for babies and toddlers," said Victorian Opera's education manager Ioanna Salmanidis.

They already have primary and secondary school programs.

But overseas opera companies are already digging deeper. Finland's Ooppera Baletti has held more than 130 "First Taste of Opera" workshops for both infants and toddlers since the start of last year.

Scottish Opera is touring BambinO, designed for infants as young as six months, a follow up to 2010's acclaimed BabyO 'musical experience'. And the Royal Opera House at Covent Garden holds Opera Dots for under-5s, which includes workshops designed for babies as young as three months.

CEO Elizabeth Hill-Cooper said VO wanted to take its time developing the idea, which they hope will return in 2021. They had to scrap an early script last year because it just wasn't holding the children's attention well enough.

The feedback from overseas was to keep the show moving and changing.

Salmanidis said another challenge was getting the singers – some of Australia's best – to stop belting out the tunes as if they were on a big stage and moderate to a more intimate, baby-friendly volume. 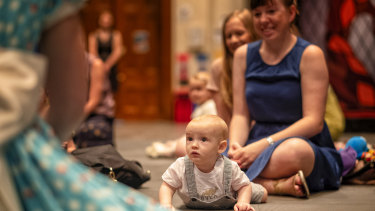 Keeping the show changing and moving was essential to capturing the attention of younger audiences. Credit:Luis Enrique Ascui

But it's worth it. As Salmanidis pointed out, if you get opera to children early then it strips away some of its daunting stigma.

"Younger audiences don't have any preconceptions about what opera is or what it should be," she said. "They engage with the artform a lot differently.

"Unfortunately opera has a history where it is seen as an elitist artform and we're really trying to break that down. But children seem to love opera just for what it is."

In their 25-minute run time they wanted to stay true to the artfom and present genuine opera, not just songs for babies. 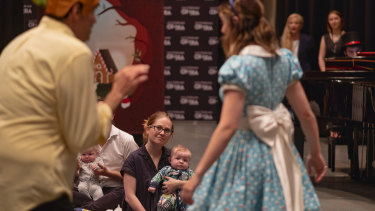 By the end of the show the tiny opera-goers have heard classic tunes from Verdi, Delibes, Rossini and Mozart.

They were literally drooling with joy. Though a standing ovation appeared beyond them.