On only one occasion did I feel moved to apply a censor’s red pen through a line of copy by another writer for political reasons. It happened around 20 years ago when I held an executive position at a national newspaper. Our resident rightwing commentator, probably the brightest of them all, had chosen to open his column with this punchy, three-word salutation: “Viva General Pinochet”.

The following is a rough approximation of the short and indecorous conversation that unfolded between us.

“He brought stability to Chile and halted the communist tide that would have plunged the country into chaos.”

“He dropped political opponents out of helicopters from great heights into rivers.”

“That’s where some of the blighters deserved to be.”

“That’s where you’ll soon be. That line’s coming out.”

This wasn’t an act of retrospective defiance by me in solidarity with the tens of thousands of Chileans who were tortured, murdered and oppressed by Augusto Pinochet’s evil military regime between 1973 and 1990. The line “Viva General Pinochet” simply undermined an otherwise well-argued column analysing why Margaret Thatcher felt she had a duty to defend the dictator when he was arrested on British soil in 1998. It was a cartoon slogan, I felt, that detracted from some serious points about Thatcher being loyal to an old ally who lent her the assistance of the Chilean air force during the Falklands war. He had also allowed disassembled aircraft parts to be shipped in for deployment by the British.

I wondered too if Pinochet might have been possessed of a keen sense of irony. Eight years before the Falklands war, he had encountered some turbulence in his relationship with the UK over military aircraft parts. This followed the military coup he had directed in Chile, which saw the overthrow of the democratically elected socialist government of President Salvador Allende and a brutal crackdown on trade unionists, leftwing activists and recalcitrant members of the Chilean army. 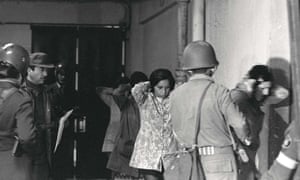 The story of Pinochet’s trouble with British-made aircraft parts is beautifully recounted and brought up to date in the documentary film Nae Pasaran. The film pays tribute to the Scottish trade unionists working at the Rolls-Royce plant in East Kilbride in 1974 who refused to carry out repairs to Chilean air force jet engines, eventually rendering them obsolete. They knew they were risking their livelihoods and their families’ futures, but they had also seen footage of jets using these engines bombing Santiago and of political prisoners being herded into football stadiums, where they would be tortured and many murdered.

Felipe Bustos Sierra, a Belgian/Chilean film-maker based in Scotland, was inspired to make Nae Pasaran by a memory passed on by his father. Now the men who organised this Scottish industrial revolt get to discover the impact it had on the lives of some of those suffering under one of the most repressive regimes of the 20th century.

The actions of those East Kilbride workers occurred only a generation ago and within the memory of the majority of Scottish citizens, yet curiously their act of resistance and compassion has been largely forgotten.

Currently screening in short runs in small arts theatres across the UK, Nae Pasaran will be missed by the overwhelming majority of the cinema-going public. The presence of the BBC in the credits, however, provides hope that it will soon be coming to our television screens. When it does, I hope the BBC shows it with some prominence, because this astonishing tale is about much more than a colourful moment in history. I saw it at the Glasgow Film Theatre last week, where it was greeted by spontaneous applause at the end.

More than once, the trade unionists and shop stewards, now long retired, speak mournfully about the passing of a time when a well-organised trade union could intervene successfully in such matters. “It wouldn’t happen now,” they say. Decades of Tory anti-trade union legislation, which was permitted to stand by Tony Blair, have seen to that.

The Stockholm International Peace Research Institute states that the UK was the sixth-biggest arms dealer in the world in the period 2013-17 and the second-largest exporter of arms to Saudi Arabia, an evil regime that is just as repressive and brutal as Pinochet’s. Yet Theresa May is defying a call from the European parliament last month for an EU-wide embargo on arms sales to Saudi Arabia following the murder of the journalist Jamal Khashoggi at the Saudi consulate in Istanbul. Germany has since halted all arms sales to Saudi; Tory MEPs all abstained in the Brussels vote.

Mrs May will no doubt use Brexit as a means of ensuring that her government never has to conform to any future European queasiness about feeding murderous regimes, just as she will use it to further ensure that Britain’s employees will rarely be subject to pesky EU workplace protections her party hates so much.

• Kevin McKenna is an Observer columnist