Monochrome Queen! Letizia of Spain looks elegant in a striped dress as she and husband King Felipe touch down in Peru for three-day visit

Queen Letizia looked elegant in a monochrome ensemble as she and husband King Felipe arrived in Peru today.

The Spanish royal, 46, opted for a striped fit-and-flare dress as she and Felipe, 50, were given a red carpet welcome in Lima.

The couple were greeted by Peru’s President Martin Vizcarra and First Lady Maribel Diaz shortly after touching down in the capital.

Letizia and Felipe are conducting a three-day tour of the country in a bid to strengthen ties between the two nations. 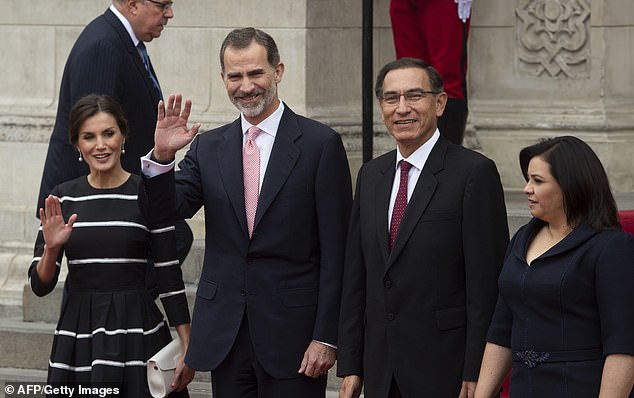 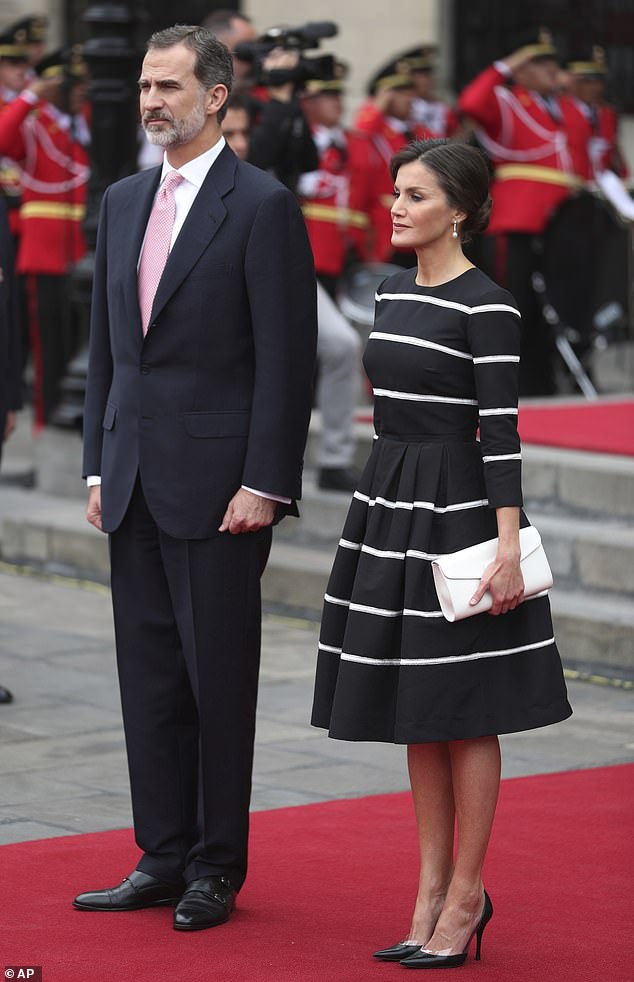 Letizia, 46, opted for a striped fit-and-flare dress as she and husband Felipe arrived in Peru ahead of a three-day tour of the country Buy it at Farfetch

Queen Letizia is known not only for her philanthropic work around the world but also by her timeless and elegant style.

Queen Letizia routinely wears high street brands such as Hugo Boss and Zara and makes them look like expensive off-the-runway ensembles. It blurs the line when she actually goes for the designer versions such as this stunning dress from one of her favorite labels, Carolina Herrera.

The classic fit-and-flare silhouette paired with the striped fabrication and quarter sleeve make this a feminine powerhouse in the style department.

Snag the same one via the link to the right for $2990 and make like a Queen this autumn …alternatively, shop our high-street finds down below!

Opting for a typically chic ensemble for the occasion, Letizia teamed her frock with black stiletto heels and a white clutch.

Wearing her brunette locks in an up-do, she finished off the look with a pair of pearl drop earrings.

Letizia and Felipe were welcomed at the Government Palace in Lima with a Guard of Honour after arriving in Lima.

They both looked in high spirits as they waved at well-wishers while posing with President Martin Vizcarra and his wife Maribel Diaz. 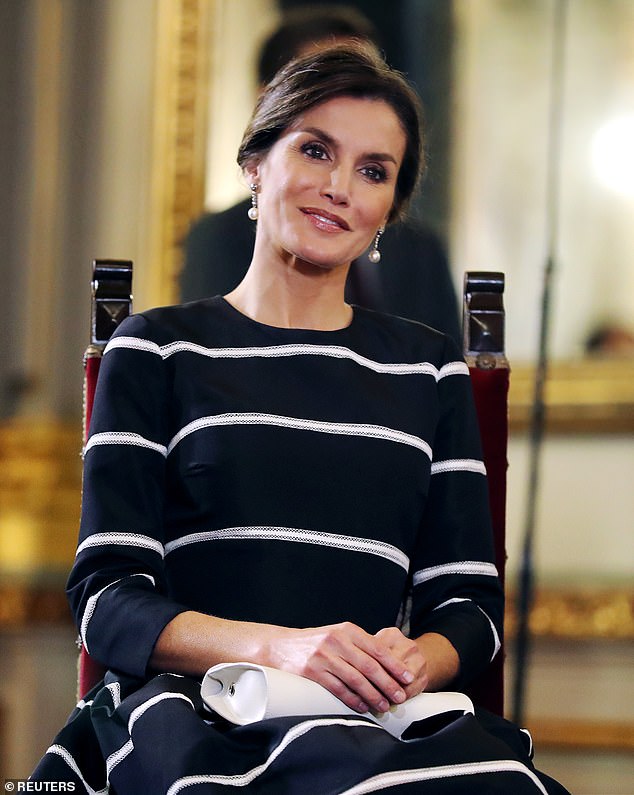 Letizia (pictured inside the Government Palace in Lima) accessorised her look with a pair of pearl drop earrings, while wearing her brunette locks in an elegant up-do 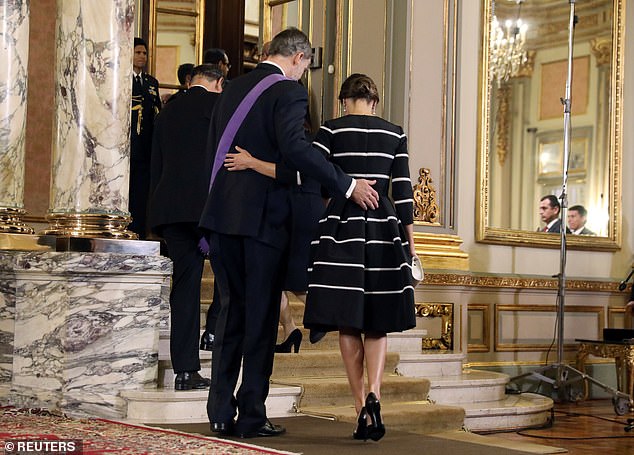 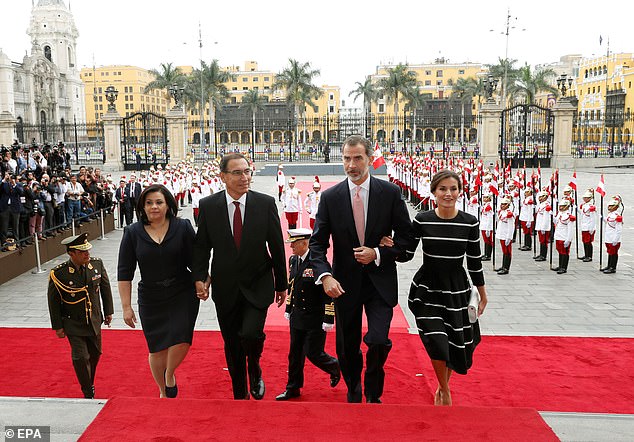 The couple later gave a rare PDA, placing their arms around one and another while inside the Palace.

Letizia and Felipe were also seen linking arms with one another, as the Peruvian president and First Lady held hands while going inside for a meeting.

Peru’s Foreign Office explained how the Spanish royals were visiting the country at the invitation of President Vizcarra.

In a statement, a spokesperson said:  ‘The presence of Their Majesties in Peru has particular significance, as it helps strengthen the solid friendship with Spain and renew deep historic-cultural, economic, and cooperation ties binding the two nations’. 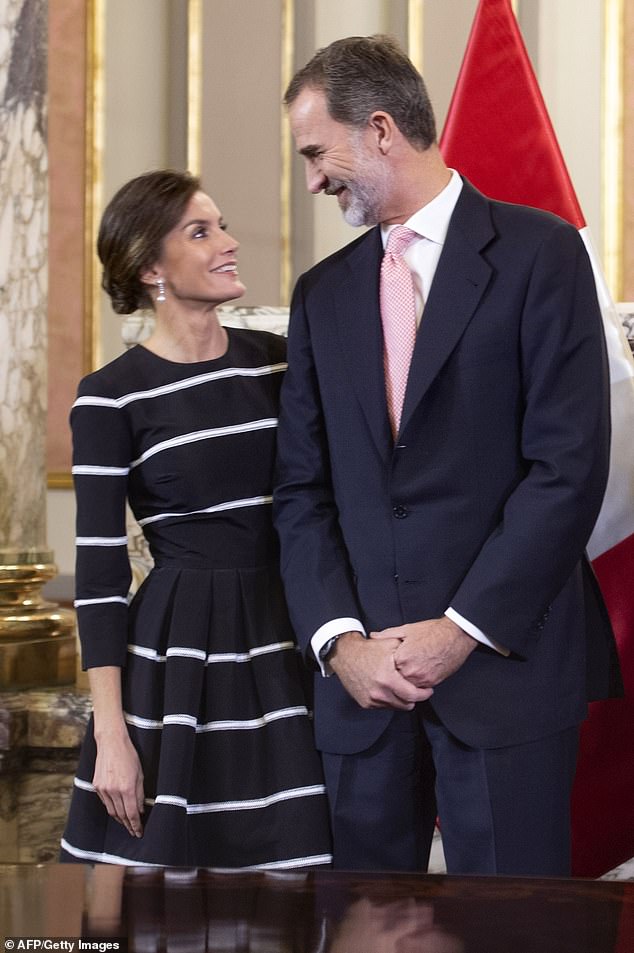 Letizia and Felipe both looked to be in high spirits during the meeting at the Government Palace in Lima, appearing to share a joke 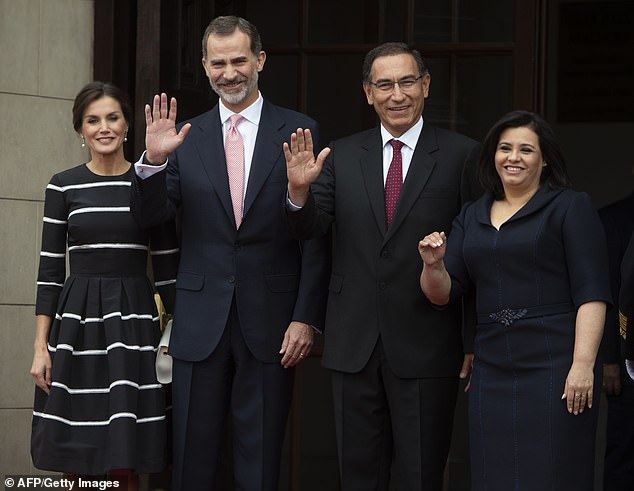 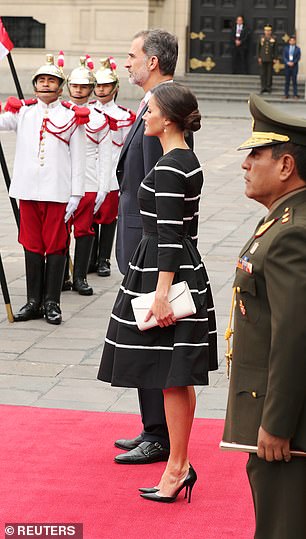 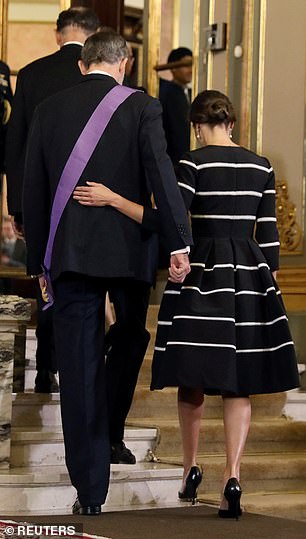 The visit to Peru comes after Felipe travelled to France at the weekend for Remembrance Day commemorations.

The Spanish King met with French President Emmanuel Macron and his wife Brigitte at the Elysee Palace in Paris as part of a ceremony marking 100 years since the end of the First World War.

Letizia did not join her husband in Paris, despite a number of other ‘First Wives’ attending the commemorations.

Princess Charlene of Monaco, Brigitte Macron and Melania Trumo were among those who attended a dinner at the Orsay Museum in Paris. 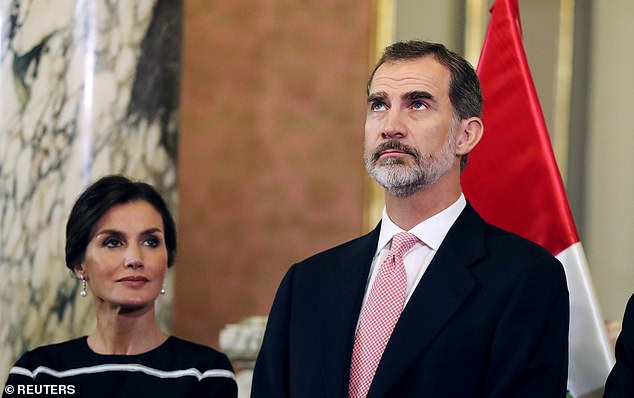 After arriving in Lima, Felipe and Letizia attended a meeting at the Government Palace in Lima with President Martin Vizcarra and First Lady Maribel Diaz 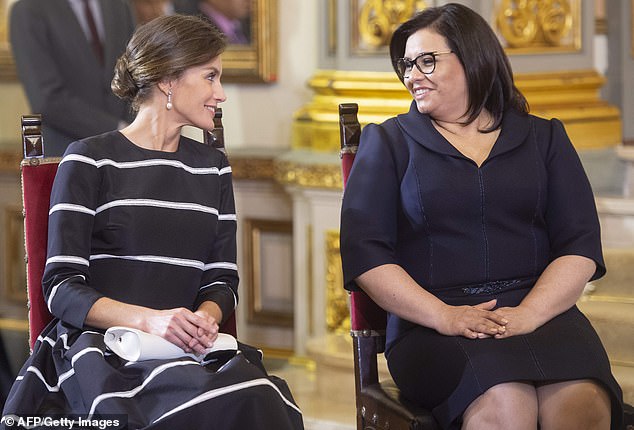 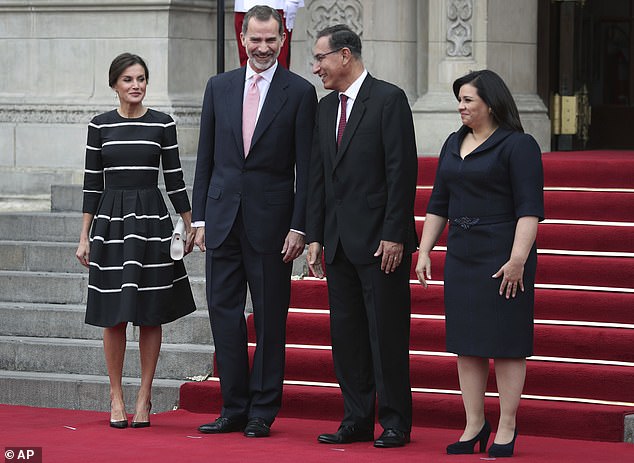 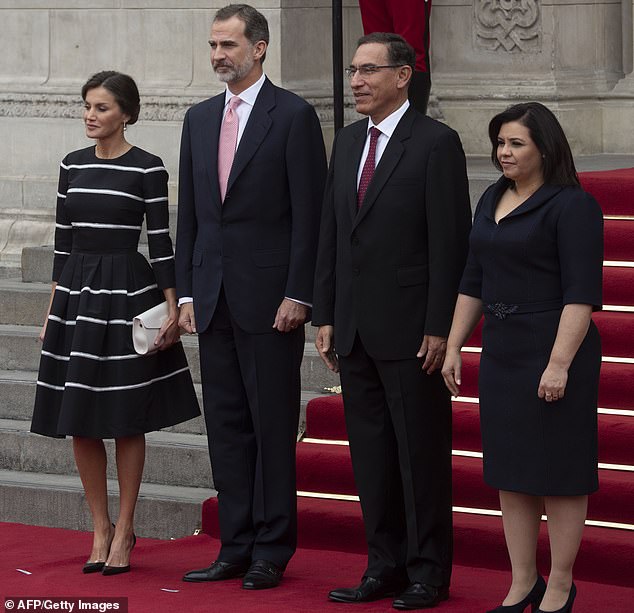 The Spanish royals were given a red carpet welcome at the Government Palace in Lima, where they were greeted by President Martin Vizcarra and First Lady Maribel Diaz (far right)