Prince Harry and Meghan Markle have bewildered fans after featuring an advert for a positive news brand’s online shop on their official Instagram page.

The Duke, 35, and Duchess of Sussex, 38, announced over the weekend that they would be following Global Positive News Network by sharing a collage of nine images with their 11 million followers on @SussexRoyal Instagram.

But eagle-eyed royal fan @GertRoyals quickly noticed that one of the images was actually an advert for the brand’s online shop which was posted by Global Positive News Network’s Instagram account in December.

The image, which showed a young model kneeling down by a dog, was used to advertise the brand’s Cyber Monday offering and a $21.95 t-shirt on its ‘Merch’ site.

Making a collage of pictures for Instagram is usually done using an app, and the person making it has to specifically choose which pictures they want to include, which are then shown with the captions cropped out. 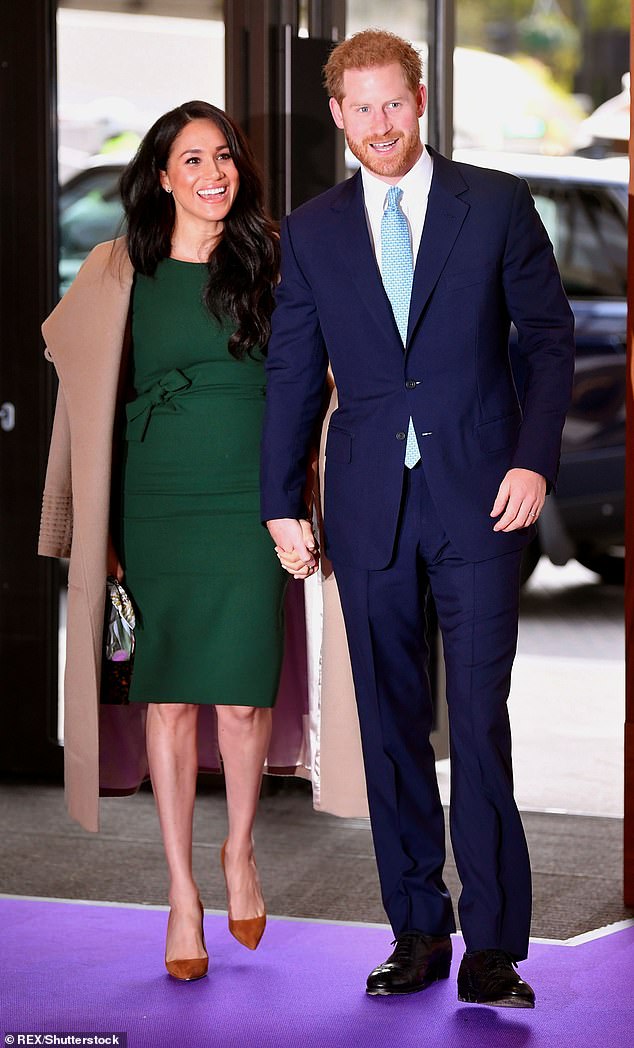 Prince Harry, 35, and Meghan Markle, 38, left some royal fans bewildered after featuring an advert for a brand on their official Instagram page

Prince Harry and Meghan announced they would be following the page at the beginning of February by posting an online collage made up of nine images on their Instagram page.

They wrote they wanted to shine a light on the company because it ‘focuses on the acts of kindness and uplifting stories of community across the globe.’

Global Positive News Network, which has 133,000 followers and cites itself as ‘the most heartwarming page on Instagram,’ describes itself as a ‘trustworthy news resource that focuses on the positives in life rather than the negatives’.

Through the app, users can select up to nine different images in a square formation similar to the one shared by Sussex Royal.

Users are then able to adjust the size of each image, swap in other images, or move the images from one part of the template to another.

Several of the other images shared as part of the Sussex Royal collage were posted by Global Positive News as recently as January.

Meanwhile one of the other images, which celebrated an all-women Delta flight crew transporting girls to NASA, was shared in November last year.

It also promises to ‘enrich your soul’ and ‘energize and uplift people’ – and it also sells merchandise on its website, including hoodies emblazoned with ‘Focus on the positive’ for $59 (£45).

On its ‘Merch’ site, the brand say that 10 per cent of its net profit goes to charity, although it doesn’t appear to name which causes it advocates.

The page was founded by Kristi Carter, who is an author and an entrepreneur living in San Francisco.

But fans were quick to notice that one of the images was actually an advert for its  Cyber Monday offering which the network had posted in December last year.

Royal followers were taken aback, with one commenting: ‘How closely did they look at the posts when they picked the photos?

‘Because this photo is just a Cyber Monday ad for 20 per cent off items in Global News’s shop.’

Another wrote: ‘They’re certainly heading in a different direction now. Time will tell how things work out for them no doubt.’

Another wrote: ‘Not liking that it’s a company, not a charity. Yes, they’re not working royals yadda yadda, but seems cringey to me.’ 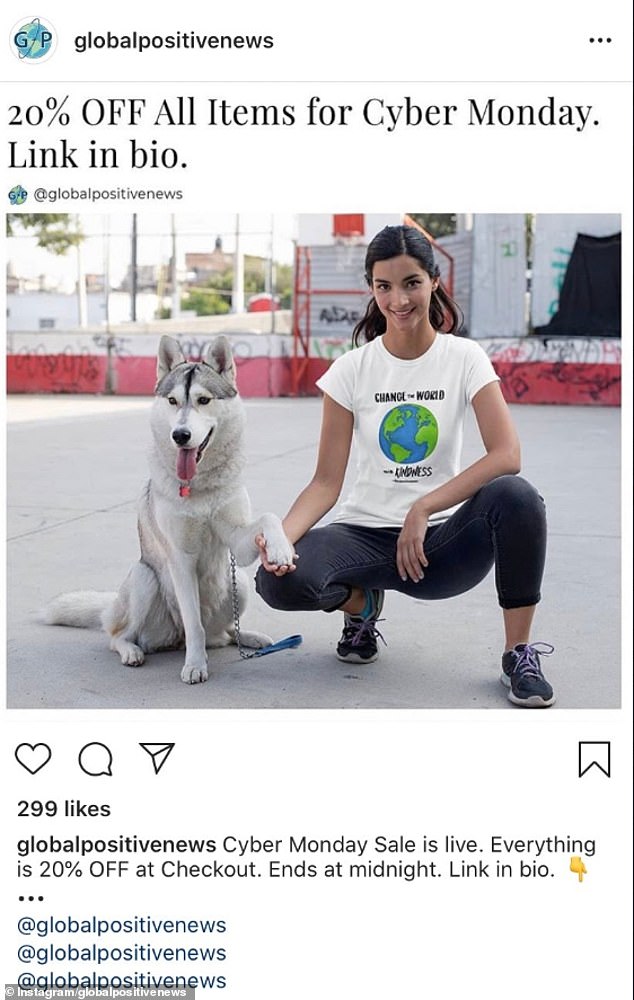 One responded: ‘If they had just highlighted the positive news that the company shares that would be one thing. But to highlight the company’s product is another.’

This featured account is the first to be promoted on the couple’s page since they decided to take a step back from royal duties and work towards being financially independent.

The royal couple vowed on New Year’s Day to choose a different Instagram account each month in 2020 to remind followers of ‘all the good that is happening in the world.’

In January, they decided to promote the work of journalist-run Instagram account, @goodnews_movement, that focused on positive news stories globally.

The Duke and Duchess of Sussex shared nine images as they announced they’d be featuring the good news brand on their Instagram at the end of last week, including the one of the girl with the dog (pictured, bottom left)

Some royal fans were left baffled by the move, with some commenting on Twitter that it ‘seemed cringey’