Prince Charles today spoke of the Duke and Duchess of Sussex’s unborn baby in an impassioned call for the world to act urgently to stop plastic polluting the planet.

The heir to the throne referred to the prospect of becoming a grandfather for the fourth time and pleaded for people around the world to create a better future for all grandchildren.

Charles, who is on a nine-day tour of West Africa with the Duchess of Cornwall, made the off-the-cuff remarks at a gathering of government officials and leaders of business and civil society to discuss plastic waste in Ghana.

At the event at a beachside nightclub overlooking the Atlantic Ovean in the Ghanaian capital, Accra, he told those at the meeting: ‘I am about to have another grandchild actually. I suspect quite a few of you may too have grandchildren or will do soon. 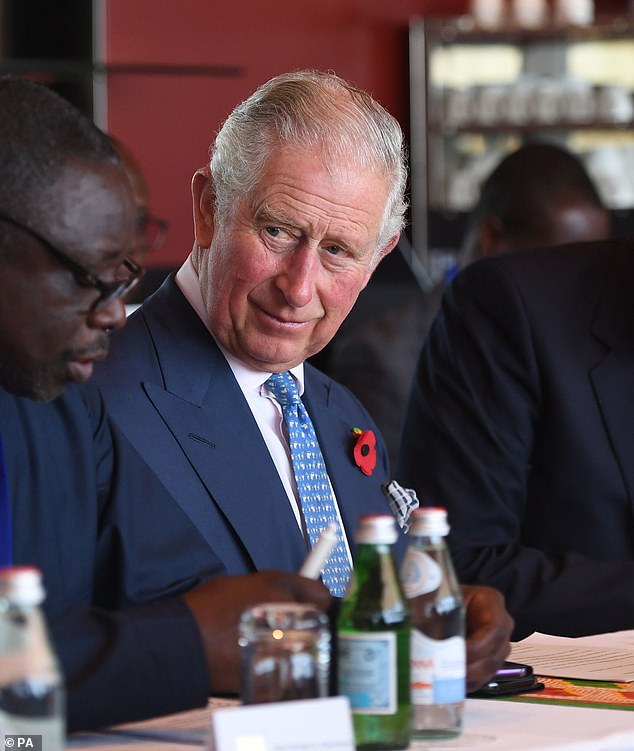 Prince Charles (pictured in Ghana today) has spoken about his future grandchild, the Duke and Duchess of Sussex’s unborn baby, in an impassioned speech where he urged the public to end plastic polution 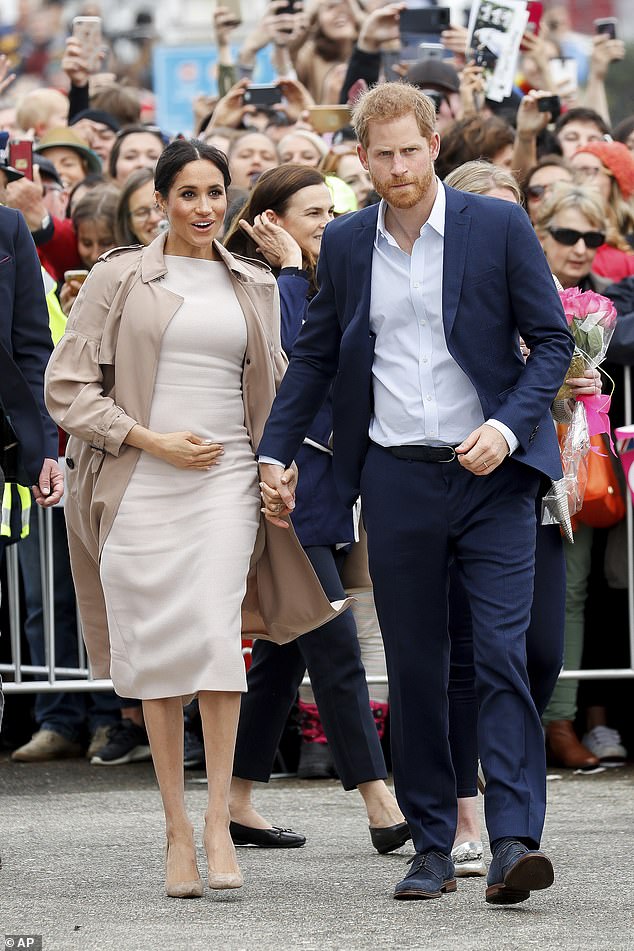 Charles, who is said to be ‘thrilled’ about the pregnancy, said that ‘all grandchildren deserve a better future’ at a gathering of government officials and leaders of business and civil society to discuss plastic waste in Ghana. Pictured: Pregnant Meghan and Harry in New Zealand

‘It does seem to me insanity if we are going to bequeath this completely polluted, damaged and destroyed world to them.

‘All grandchildren deserve a better future.’

Charles is said to be delighted at the news that his youngest son, Prince Harry, is set to become a father for the first time next spring with his wife, Meghan.

Charles spent around half an hour discussing the world’s plastic crisis with the representatives at The Sandbox night club before venturing outside to survey the Atlantic and a pristine beach below.

In the courtyard of the club, he met artists and environmental campaigners coming up with increasingly innovative uses for recycled plastic. 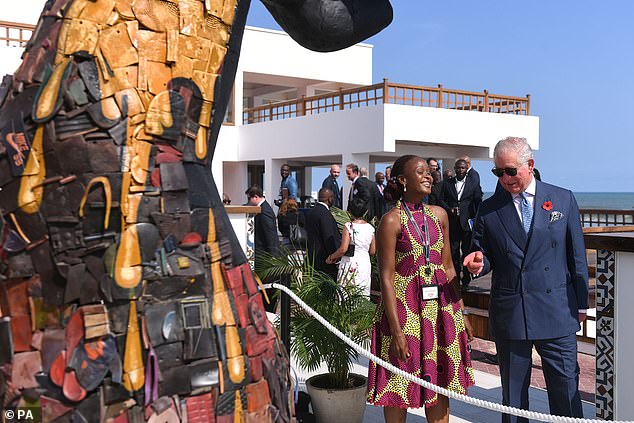 They included building blocks and stunning art works made from waste materials and designed to raise awareness of recycling.

Artist Constance Swaniker, who has turned plastic collected from beaches into giant sculptures, showed the Prince her work, including a 12ft sea horse.

‘Every single piece is recycled plastic collected from the beach,’ she said. ‘I thought it was a great way of raising awareness.’

The Prince was also given a portrait of himself amid a Union Jack, all made from recycled materials – including old paint brushes, tin cans and plastic bottles – by Chineyenwa Okoro Onu, an artist and eco campaigner who runs an environmental art project called Waste or Create. 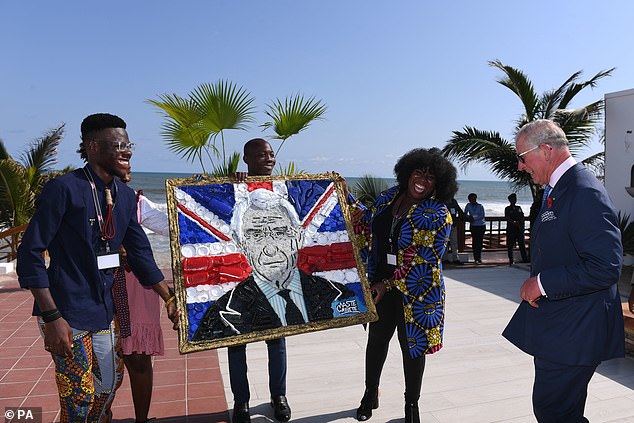 The Prince was also given a portrait of himself amid a Union Jack, all made from recycled materials 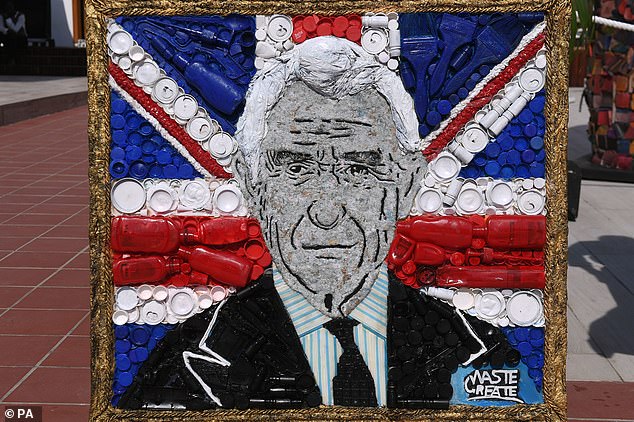 The piece was made by by Chineyenwa Okoro Onu who used old paint brushes, tin cans and plastic bottles to create it

‘In the past year we have collected about 10 tonnes of plastic and taken it to our workshops where young people turn it into art,’ she said.

‘We have regular waste collection here but it is collected altogether. We are trying to bring in waste separation so we have plastic and cans collected separately.’

Charles toured exhibits and was intrigued by one group turning waste into concrete blocks comprising 30 per cent recycled plastic that are then used to build toilets in deprived communities.

The Prince of Wales has been forced to pull out of a planned visit to Jos in Nigeria over security fears.

Charles was due to visit the troubled region on Thursday, the last day of his week long visit to West Africa on behalf of the UK government to highlight peace building and conflict resolution issues.

But the area has recently been under a dusk to dawn curfew in areas following a spate of violent killings in region already plagued by political, religious and ethnic conflict, in addition to criminal violence and drugs.

Yesterday Clarence House officials confirmed that the trip had been cancelled on the ‘advice of the British government’.

An aide said the prince would instead undertake part in a discussion with tribal leaders on the same issues in the capital city of Abuja.

A spokesman said: ‘Due to operational constraints beyond our control, we have decided at this time not to include Jos during Their Royal Highnesses visit to Nigeria. We are delighted to have an exciting programme of activity in Abuja and Lagos which will showcase those issues close to The Prince’s and The Duchess’s hearts.

‘The decision was taken upon advice from the Nigerian Government and others involved in security and operational aspects of the visit.’

They added: ‘We’ve arranged an interesting and engaging programme on Thursday in Abuja, which will include showcasing alternative livelihoods focussing on poultry and Acha supergrain, water aid and a peace-building discussion with youth peace ambassadors. ‘

Although the statement mentioned the prince’s wife, Camilla had only ever intended to accompany the prince on the first day of his three-day visit to Nigeria, before flying back to London. Charles had always intended to travel to Jos with his security team on his own.

The FCO said they were ‘not aware of any specific threats’ to the prince but explained: ‘The Nigerian Government have taken additional security precautions relating to recent clashes and this impacted upon our operational arrangements, so unfortunately we had to cancel the Jos leg of the trip.’

Earlier this year 86 people were killed and fifty houses burnt in Jos, exacerbating ethnic tensions in an already volatile city.

Much of the violence has been between the nomadic Fulani herdsmen, who are mostly Muslims, and farmers, who are predominantly Christians.

Ahead of a national general election early next year, tensions are particularly inflamed.