I came home from running errands the other night to find my 21-year-old son scrubbing the stove.

It wasn't Mother's Day. Or my birthday. Did he have a fever? 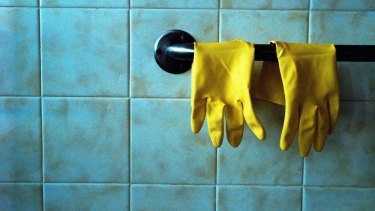 "I just thought the stove looked like it could use a little cleaning," he said.

Perhaps only a woman knows the significance. Our gender has been waiting for others to take up bucket and sponge, without being asked, ever since the first buffalo cloak left a hairy mess on the cave floor.

And yet somehow we got the household-observation gene while everybody else got the I-never-saw-the-cat-poop-on-the-floor gene. Somehow we're the ones who know just because we didn't witness the cat in the act doesn't mean we can't get a paper towel and wipe it up.

This is universal, as demonstrated by stand-up comedy and the syndicated comic strip Blondie, which can bring down the house with tales of a nagging wife standing over a dozing husband with a chore list that curls halfway around the block.

Sociologists and psychologists, meanwhile, talk more soberly about a cultural conditioning that goes beyond a husband and wife squabble.

In fact, in addition to still doing the bulk of the actual housework, women carry the "mental load" in the home, which is a phrase making the rounds in feminist blogs, which is the continuous cycle of thinking, planning and organising domestic life.

While the rest of the family seems oblivious, the woman also handles the thoughts, if not the actions, of endless chores, one begetting the other, a phenomenon masterfully depicted by the French cartoonist Emma.

Her gone-viral comic, You Should've Asked, shows a woman clearing the table but then while she's putting stuff away, she sees a dirty towel, which she takes to the laundry basket, which is full, so she starts a load of laundry, which leads her to the kitchen to see the veggies that need putting away, and while she's putting away the veggies, she realises she's out of mustard and needs to add that to the shopping list.

When she is exhausted, her partner says, "You should have asked for help," when what she really wants is a partner who knows how to help without putting the onus on her to also now delegate. Which is work, too.

Clearly, woman-as-household-manager (nagger) is a socialised condition, one perpetuated by June Cleaver, and disected in 1963 when feminist writer Betty Friedan released The Feminine Mystique, informing women they were capable of more than housework.

Women have been raised to see a sparkling house as a sign of our self-worth.

There came a shift in household-chore distribution when women entered the work force en masse in the late 20th century. Yet, according to the US Organisation for Economic Cooperation and Development, whether we work outside the home or not, US women are still doing more than four hours of house- and child-care work per day, compared to men's contribution of two hours.

Last year, the University of Melbourne and Melbourne Institute’s longitudinal HILDA survey found women perform an average of seven hours more housework each week than men. Even in households where women are the sole earner, they still perform 48.5 per cent of the housework.

Meanwhile, the bigger story, of everybody in the house expecting the woman to be the leader, is as alive as the dust bunnies I wish didn't live under my bed.

This includes we women ourselves, who have been raised to see a sparkling house as a sign of our self-worth, writes women's leadership expert Tiffany Dufu in her self-help book Drop the Ball: Expect Less from Yourself and Flourish in Work & Life.

If the mental workload problem is going to change, in fact, guess what, we have to let some things go, even as other family members do more stepping up.

As I watched my son apply elbow grease to the real grease on the stove the other night, meanwhile, it occurred to me that maybe this will be the generation of men and women that gets it.

People malign millennials for their self-absorption. But maybe this generation, which identifies with gender equality and a balanced life more than any generation before, will be the one to get it right.

I hope they hurry. The stove needs cleaning again.